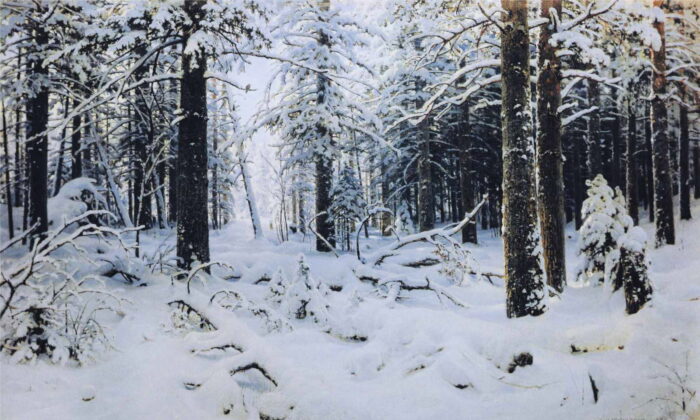 What Good Is Poetry? Shakespeare’s ‘Winter’ and the Hard Joys of the Season

The world bound up in the snow and ice of winter is as fascinating as it is forbidding.

Hoary mountains, blinding blizzards, snowy deserts, solid waters, fluid fires of the aurora borealis, and air that stings to breathe all give the distinct impression that men ought not keep company with such inhospitable presences.

But how wonderful they are.

There must be some mysterious reason why the holy places of Samuel T. Coleridge’s pleasure-dome in “Kubla Khan” were savage caves of ice. It could also be the reason why Norse mythology imagines that the first man was fashioned out of a glacier instead of the ground. Might it be that the hostility of the polar elements is the very thing that makes them irresistible? Somehow their unmerciful aspect reflects majesty, even the divine. Old Man Winter is as charming as he is cruel.

Appreciating these qualities requires an experience beyond poetry, yet only poetry can give it expression. William Shakespeare’s “Winter” from “Love’s Labor’s Lost” is a simple yet profound piece of poetry that captures something of why the icy seasons are natural occasions to grip a truth: Hardship leads to happiness for the hardy folk who happily embrace such wisdom.

When icicles hang by the wall
And Dick the shepherd blows his nail
And Tom bears logs into the hall
And milk comes frozen home in pail,
When blood is nipp’d and ways be foul,
Then nightly sings the staring owl,
Tu-whit;
Tu-who, a merry note,
While greasy Joan doth keel the pot.

When all aloud the wind doth blow
And coughing drowns the parson’s saw
And birds sit brooding in the snow
And Marian’s nose looks red and raw,
When roasted crabs hiss in the bowl,
Then nightly sings the staring owl,
Tu-whit;
Tu-who, a merry note,
While greasy Joan doth keel the pot.

Though the poem jingles with an almost nursery quality, it is bustling with the work of men and women moving through its chilled scenes with cheer. And though these scenes seem to come from a child at a frosty window, they are of the workaday winter world that stamps and toils through this meditation with heavy boots, woolen scarves, and wintry darkness. Frostbitten men blow on their fingers as they traverse the treacherous paths from barn and shed. Greasy women rub their running noses as they keep the scullery blazing.

Chapel coughs and roasting crab apples sputter as they form a chorus with brooding birds and wise old owls. The sounds share a single, communal, merry note, which is a keynote of culture. Life and labor are given a new spark in this song as they are set against elements that make the going harder. There is nothing like a bit of winter for human households and whole societies to assert themselves. The smallness of men and women struggling in the dead of winter is precisely what makes mankind great.

But the silver, frigid night is an occasion to realize that though man is the lord of nature, he is subject to it at the same time. The frozen elements that glare from expanses of storm cloud and snowbank and frozen lake suggest with white and wise silence that we, the frailer members of creation, may have little to no business clinging in their crags.

Surviving against the winter is hard work, true, but it’s a kind of joy as well. A merrier jest and a merrier note there cannot be for the cold can invigorate as well as it can kill, and the snowy peaks and snow-choked alleys may call out human civilization as a flash in the pan—but a mighty flash it is. The tenuous tenacity of the human race has always merited reward. So it has been and still is. The indifferent powers that be must endure us as we build up fires, shovel out roads, and shield our shelters down to crack and cranny from winter’s icy intrusion.

We all know those exertions and their consequent feelings, and the clear, crisp sounds on a winter’s night that make us glad to be alive. We can only thrill in life when it is being threatened, even in a small way, and Shakespeare’s wintry vignettes rejoice in both the thrill and the threat, intoned by the merry notes that proceed from living and working and eating and surviving in the teeth of bitter weather.

Sean Fitzpatrick
Follow
Sean Fitzpatrick serves on the faculty of Gregory the Great Academy, a boarding school in Elmhurst, Pa., where he teaches humanities. His writings on education, literature, and culture have appeared in a number of journals, including Crisis Magazine, Catholic Exchange, and the Imaginative Conservative.