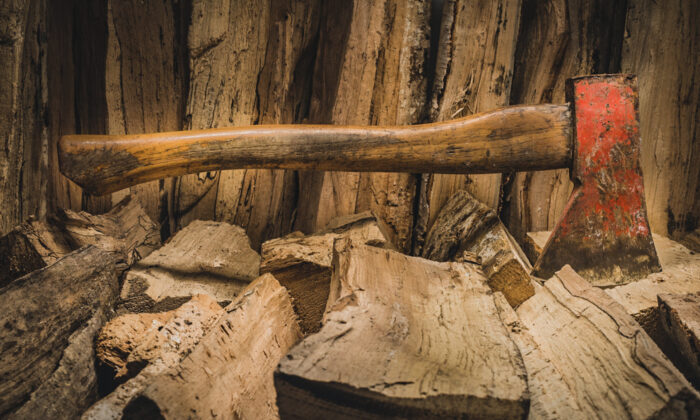 Hatchet axe being stuck in a pile of split wood logs used for fire. Concept of making logs with natural colors- Axe viewed from the side. (Anze Furlan/Shutterstock)
Literature

What Good Is Poetry? Robert Frost’s ‘The Axe-Helve’: Fitting Axes and Forming Children

Paul J. Prezzia
Paul Joseph Prezzia received his M.A. in history from the University of Notre Dame in 2012. He now teaches at Gregory the Great Academy and lives in Elmhurst Township, Pa. with his wife and children.
View profile
Follow
biggersmaller
Print

I’ve known ere now an interfering branch
Of alder catch my lifted axe behind me.
But that was in the woods, to hold my hand
From striking at another alder’s roots,
And that was, as I say, an alder branch.
This was a man, Baptiste, who stole one day
Behind me on the snow in my own yard
…

Picture this sequence of events: You’re out cutting firewood, a neighbor walks up behind you, grabs the axe while you’re at the bottom of your swing, and then … that evening, you’re at his home talking about homeschooling. A little strange, no? But that is a summation of the action in Robert Frost’s poem “The Axe-Helve.”

It is a poem about two things and about one thing at the same time. It is indeed both about making a good axe and about educating children. But in turn, each of these crafts concerns one thing, which is the necessity of knowing what a thing is before one can hope to make (or build) it better.

The setting for this whole reflection is turn-of-the-century New England. Robert Frost himself is out chopping wood. Suddenly, his French neighbor, Mr. Baptiste, interrupts him: “He caught my axe expertly on the rise/ When all my strength put forth was in his favor/ Held it a moment where it was, to calm me/ Then took it from me—and I let him take it.”

Baptiste disapproves of the machine-made handle on Frost’s axe and explains this disapproval with French-colored language: “You give her one good crack, she’s snap raght off./ Den where’s your hax-‘ead flying t’rough de hair?”

The Frenchman invites Frost to his house that night to take his pick of handmade handles (helves). Frost accepts, and he visits his neighbor’s house for the first time that night. Baptiste shows off his collection, selects the best candidate for Frost’s axe head, and carefully whittles away just enough for a perfect fit. Baptiste explains how a good helve has to be cut in conformity with the grain of the wood, then why he doesn’t want his children to be forced to go to the local public school, and finally, with a “French touch,” lovingly presents the refined axe to Frost.

Comedy touches the piece throughout. There are the opening lines of the poem, where Frost tongue-in-cheek muses about how it has always been trees, not men, who have caught his axe before, trying to defend their own. There’s Mr. Baptiste’s home, with its “over-warmth of kitchen stove,” and where Mrs. Baptiste and her rocking chair seem to be on a perpetual path to destruction:

Mrs. Baptiste came in and rocked a chair
That had as many motions as the world:
One back and forward, in and out of shadow,
That got her nowhere; one more gradual,
Sideways, that would have run her on the stove
In time, had she not realized her danger
And caught herself back where she started from.

Finally, or as Frost cryptically says, “needlessly soon,” the axe handles are ready for examination. Anyone who has known a real craftsman and seen him explain some part of his work can hear the mystical bond between him and Mr. Baptiste in the following lines:

… He wished me
To have the best he had, or had to spare—
Not for me to ask which, when what he took
Had beauties he had to point me out at length
To insure their not being wasted on me.
He liked to have it slender as a whipstock,
Free form the least knot, equal to the strain
Of bending like a sword across the knee.
He showed me that the lines of a good helve
Were native to the grain before the knife
Expressed them, and its curves were no false curves
Put on it from without. And there its strength lay
For the hard work. He chafed its long white body
From end to end with his rough hand shut round it.
He tried it at the eye-hole in the axe-head.
‘Hahn, hahn,’ he mused, ‘don’t need much taking down.’
Baptiste knew how to make a short job long
For love of it, and yet not to waste time either.

The last two lines always remind me of my little brother when he was 4, and the game he had me play where he kept making up new rules so that it wouldn’t end.

Like all the best comedy, the poem is also absolutely serious. Depicting the constellation of strange and humorous situations that is the Baptiste house, Frost inserts a sudden and definitive statement: “Do you know, what we talked about was knowledge?”  The comparison of a good axe to a good human being is as ridiculous at first glance as it is profound on further reflection.

An axe handle is curved, right? Well, Baptiste’s whole argument is that if you use a machine to die-cut straight-grained wood into this shape, it will be inherently brittle because the strength of wood is along its grain. Sure, go ahead and cut a piece of lumber into whatever shape you want; but don’t expect it to do good, hard work unless you have respected its inherent properties.

Similarly, one could take a child and stamp her with what Frost calls “laid-on education,” but Baptiste does not want to do that with his children. He does not want to send them to the public schools of New England at that time. There may be other reasons involved, such as the school’s probable hostility to the French culture of his home, but the only explicit objection is that Baptiste believes that his children’s integrity will not be respected by the public school, and that they will be die-cut into whatever shape early 20th-century educators wanted at the time. Many readers now might have similar feelings about the modern education factory.

It’s a fine line, a fine and curving line, that Baptiste proposes. Frost refers to biblical imagery as he finishes his poem and Baptiste finishes the axe: “He brushed the shavings from his knee/ And stood the axe there on its horse’s hoof,/ Erect, but not without its waves, as when/ The snake stood up for evil in the Garden.”

Working with the innate capabilities of wood or children is going to produce the most capable axe or human being, yet that means both could be used for evil as well as for great good. But that is the risk that axe-makers and parents take. Their reward is a well-poised human being, like the finished axe Baptiste squints at with pleasure in the final lines: “See how she’s cock her head!”

Paul J. Prezzia
Follow
Paul Joseph Prezzia received his M.A. in history from the University of Notre Dame in 2012. He now teaches at Gregory the Great Academy and lives in Elmhurst Township, Pa. with his wife and children.