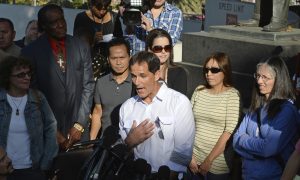 A Freedom My Friends in China Would Fight For
0 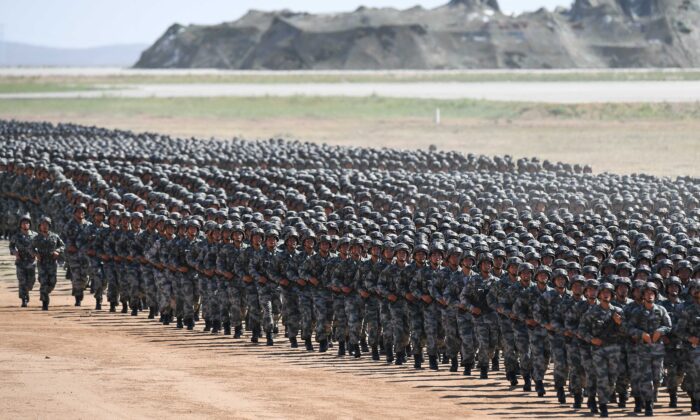 Chinese soldiers march in a military parade at the Zhurihe training base in China's northern Inner Mongolia region on July 30, 2017. (STR/AFP via Getty Image)
The Reader's Turn

What Are the Goals of China’s Development?

What are the goals of China’s development? This sounds like a ridiculous question, or maybe it’s not.

You could say that development is about obtaining a better life. You’re not wrong. This is generally true. But, by “China,” I mean the “People’s Republic of China” (PRC); this is different.

The final goal of China’s development is to change the existing international order and to enable China to rule the world. To put it more directly, their final goal is to eliminate the United States and the entire Western civilization, and to use the Chinese system, including its political system and culture, to rule the world. Is that alarmist? Is it impossible? Let me tell you what I know.

It is well known that after 1949, the Chinese Communist Party began to rule mainland China and established the communist dictatorship the “People’s Republic of China.” Marxism and Leninism are the foundation of all actions in that country. Naturally, the realization of Marx’s communist ideals throughout the world was the ultimate goal of all actions in that country. In other words, they must “completely smash the old world” and “build a new world” as Marx and Lenin meant.

The “new world” to be established should be the communist society that they pursued at that time. Therefore, the whole world has seen that on the battlefields of Korea and later Vietnam, the Chinese army directly clashed with the United States and the United Nations.

The same is true in other respects. China supports all anti-American and anti-Western forces in the world. In the global Cold War between East and West, China was always aligned with the Soviet Union and Eastern Europe. Later, due to conflict between China and the Soviet Union, the two regimes parted ways and China turned towards the “Third World” to gain more fuel for its fire.

At the end of the 1970s, China established diplomatic relations with the United States. However, China’s desire to defeat the United States and destroy the West had not changed at all. Furthermore, by the 1970s, there was already the idea of ​​overthrowing both U.S. imperialism and Soviet revisionism to dominate the future alone. It was just that they didn’t have enough strength at that time.

In the 1970s, the appearance of closeness and love between China and the United States actually had its own purpose. U.S. politicians wanted to weaken the overall strength of the Soviet socialist camp in order to eventually defeat the Soviet Union and the Eastern European bloc. The Chinese side just happened to “borrow a knife to kill someone” and used the hands of the United States to remove their own serious problems and remove a major obstacle to their final goal. These things basically happened in the Mao Zedong era.

After Mao, China soon entered the era of Deng Xiaoping. China’s “reform and opening up” showed that it wanted to integrate with the Western world. America was happy, and the world was smiling. After the disintegration of the Soviet Union and Eastern Europe, U.S. politicians even thought that the socialist camp was basically dead.

With the development of a market economy, it was also hoped that China would increasingly accept the spirit of contracts and universal values, and finally complete the transformation of the political system and become a free and democratic country. Therefore, even in the summer of 1989, when the June 4 massacre took place in Beijing’s Tiananmen Square, U.S. politicians still kept their eyes closed and continued to help Deng Xiaoping’s China achieve most-favored-nation status and then be accepted as a member of the World Trade Organization (WTO).

Supporting appeasement along the way has made China richer every day. But, unfortunately, instead of showing any signs of democratization of the political system, China, with its economic development, has become increasingly dictatorial. And it has always actively made use of the freedom and tolerance of the democratic systems of the United States and the West, and the goodness of the people, infiltrating and stealing from across the political, economic, scientific, technological, and cultural fields.

In fact, the development of a market economy and then the automatic move to democracy was just the wishful thinking of U.S. politicians, and is very naive. You have to understand that the group of Deng Xiaoping is the Bolshevik Party! They wanted to completely smash an American-led “old world.” From that point, they have not changed.

Since the end of the 1970s, China has followed Deng Xiaoping’s “Tao Guang Yang Hui” approach. What does it mean? To put it bluntly, it means hiding their ambition to dominate the world and developing in a low-key manner.

During this period, it was not that China had changed its goals and stopped seeking hegemony. It was because it did not have enough strength at the time and did not think about dominating for the time being. The Chinese call this “Crouching Tiger, Hidden Dragon.” China disguised itself as a gentle panda.

In the era of Deng Xiaoping, communist China had an important change in concept. That is, they gave up the ideals of communism and instead strengthened their pursuit of power and wealth. In other words, they completely tore off the idealistic mask, and revealed that all they want to do is “smash the old world” and dominate global ambitions. Perhaps the group of Deng Xiaoping have never been idealists, and communism and socialism are just the guise of their political existence. At that time, China had fallen deep into the quagmire of corruption and power.

After 2012, Xi Jinping became the leader of China. At that time, China had accumulated wealth over more than 30 years of “reform and opening up,” especially after joining the WTO; as is well known, through various way that improperly violate world trade rules, China has gained a huge amount. It has become the second-largest economy in the world.

As a result, there was the “Belt and Road Initiative,” the “Community of Human Destiny,” the militarization of the South China Sea, the building of overseas military bases, hacker attacks by the cyber-army, fentanyl production to fuel the opioid crisis, the P4 laboratory and virus research, etc. In addition, it has penetrated into a wider range of politics, the economy, culture, science and technology, media, and other fields.

The Chinese Communist Party’s 70-year dictatorship in Mainland China has clearly shown to the world that China is a dragon crouching under a panda’s skin. If you only see a gentle panda and don’t see a dragon lying there trying to swallow you, then the mistake you made will be historic and devastating.

The anti-U.S. and anti-Western policies of the CCP regime are determined by its genes and cannot be changed. Therefore, the final goal of China’s development must be to eliminate American and Western civilization. Both the United States and the world have to understand that a genuine relationship with China is irreconcilable—an unchangeable hostile relationship.

No matter what kind of trade and economic exchanges are done, they can’t change the outcome of the final battle. Any appeasement policies and fantasies of U.S. and Western politicians are essentially helping the enemy to become stronger and bringing themselves closer to extinction.

I don’t know what is the real purpose of Western funding of the Wuhan P4 laboratory in China and the World Health Organization (WHO). I also don’t know why so many elites from the United States and the world are sanitizing the Chinese policies and singing the praises of China. However, I have to ask, can you accept that a communist dictatorship with strong anti-universal values​​ will dominate the world? Everyone knows the story of the farmer and the snake. But, this time you are not holding a snake in your arms, it’s a dragon!