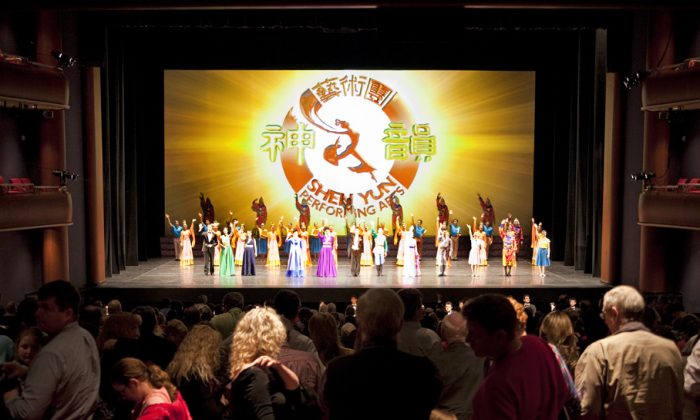 CHARLESTON, W. Va.—Shen Yun Performing Arts received a warm welcome from public officials and the people of Charleston, when the New York-based company came on March 11-12 to perform at the Clay Center for the Arts & Sciences of West Virginia.

Charleston is West Virginia’s capital and largest city, with a metropolitan population of just over 300,000. It’s known as the “Cultural, Recreational, and Business Capital of the Appalachian Mountains.” West Virginia is called the “Mountain State,” and is known for its logging and coal mining industries.

The aim of Shen Yun is to showcase China’s glorious traditional culture with the highest artistic standards.

“For 5,000 years divine culture flourished in the land of China. Humanity’s treasure was nearly lost, but through breathtaking music and dance, Shen Yun is bringing back this glorious culture,” says the website.

Representatives of the people of West Virginia were very appreciative that Shen Yun Performing Arts made the effort to come to their state.

The art and values displayed by the performances are universal and the show was well-received. Interest in China’s traditional culture is pervasive in a state that prides itself in welcoming diverse traditions and cultures.

The governor of West Virginia, Earl Ray Tomblin, welcomed Shen Yun to Charleston, and wrote, “Thank you for sharing this international phenomenon with the Mountain State.”

“West Virginians value traditions and heritage and enjoy the opportunity to experience those of other cultures,” wrote Natalie E. Tennant, W. Virginia’s Secretary of State.

She continued, “I commend everyone at Shen Yun Performing Arts for providing a unique opportunity for West Virginians to gain a deeper understanding for traditional Chinese culture.”

The Clerk of the West Virginia House of Delegates, Gregory M. Gray, welcomed the company on behalf of all members of the House of Delegates, and went further to say, “I will personally attend your Grand Opening Spectacular this evening, and I look forward to experiencing an inspiring, exhilarating performance and portrayal of traditional divine Chinese culture.”

Speaker of West Virginia House of Delegates Timothy R. Miley expressed appreciation for “the hard work it must take to bring the history and culture of China alive to the stage here in Charleston, West Virginia.” Speaker Miley said he encouraged many to come experience the show.

Daryl Cowles, minority whip of the West Virginia House of Delegates, wrote, “The art of dance connected with the traditional Chinese values can inspire harmony between heaven and earth.” Cowles wrote that such connections can build multi-cultural relations globally.

U.S. West Virginia Senator Joe Manchin III sent a greeting to the company. “In West Virginia, we pride ourselves in having a wealth of cultures and traditions to pass on to future generations. That is why I am truly appreciative of Shen Yun Performing Arts for bringing traditional Chinese dance and music to Charleston with this remarkable performance,” he wrote.

Another proclamation in recognition of Shen Yun Performing Arts’ “talents and musical gifts” was from Kanawha County Commission and signed by the president, W. Kent Carper, and Commissioners Henry C. Shores and Dave Hardy.

Not just elected officials, but the residents of Charleston were appreciative of the values implicit in the performance. Baptist Minister Archie Snedegar called Shen Yun Performing Arts the most incredible performance he has ever seen.

Mr. Snedegar said that the values presented through Shen Yun are “applicable to all of us across the world no matter what our faith, no matter what our belief; I think there’s a need all over the world for people to show greater love, to show greater respect, to show kindness, and I think [Shen Yun is] accentuating that with all that they do onstage.”

A mother and her adult daughter drove 1.5 hours from Clay County, W. Va. to see the show. They were very moved by it, especially the stories pertaining to the persecution of Falun Gong, and the vocal artistry of soprano Pi-Ju Huang, who sang, “Life’s True Meaning.”