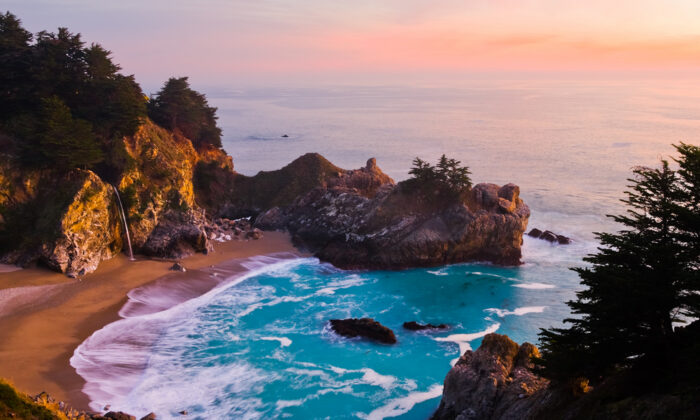 It’s long been America’s promised land. From wagon trains rolling west in search of a better life to starry-eyed hopefuls heading to Hollywood seeking their big break, the West has been the destination for many. And in 2021—when road trips are still so popular—many motorists are answering.

And the West is big. Once you’re on the coast, you’ll find plenty of places to roam. Starting in southern California, leave the smog and traffic of Los Angeles behind, making your way along Pacific Coast Highway (PCH). Then, further on, you’ll find towering redwood forests and earthy Oregonian cities, and continuing north will lead you to Puget Sound and Seattle. Along the way, you’ll find wild opportunities to get outside under sweeping skies and endless horizons, breathing the fresh air on the western edges of the country.

America’s most storied journeys by road have usually been east-to-west, with the legacy of Route 66 still looming large in U.S. culture. But people have been traveling up the coast for a long time as well. Promoted by a transportation pioneer named Sam Hill, who built the iconic Peace Arch on the border of Washington and British Columbia, the Pacific Highway became the longest continuously paved road in the world by 1926, with almost 1,700 miles of hard-top. It was named US Route 99 for the rest of the 1920s and several decades afterward, becoming the Main Street of California and the Golden State Highway.

Decommissioned in 1968, as with Route 66, Route 99 has become a patchwork of local roads and small highways, much of it paved over by the many lanes of Interstate 5 (I-5). Since 1956, I-5 has been the fastest way to drive from the Mexican border in the south to the Canadian border up north. While that route won’t trace it exactly, the legacy of the Pacific Highway served as inspiration for the roadway.

There’s certainly plenty to keep you occupied in Los Angeles, from studio tours taking you to film and television sets to the rooftop pools of West Hollywood and the lights of the Sunset Strip. But anyone who has been there will tell you—the customary gridlock of LA isn’t the best place for a fun drive.

Head north out of the sprawling city, taking US Route 101 to the northwest. The density of the city will thin out, the big hills will get greener, and wineries and other pleasures will be tucked away along the route. Consider taking a break—and even spending a night—in the seaside city of Santa Barbara, California. Walk the coast and its graceful marinas, as well as its historic downtown filled with Spanish Mission architecture and delicious, family-owned restaurants with big, open-air patios.

Diverting onto California State Highway 1, begin your journey up the famous PCH. The trip could be a whole weeklong vacation in itself, the curving road clinging to the cliffs, with so many stops along the way. In Morro Bay, California, and its 580-foot, Gibraltar-like rock, visit with playful sea otters.

At Hearst Castle in San Simeon, California, marvel at the real-life Xanadu, where media mogul William Randolph Hearst hosted both actual and Hollywood royalty in his hillside, 165-room palace, complete with a Roman-style swimming pool and what was once the world’s largest private zoo. Further up the road, hike to the waterfall in Pfeiffer State Park and walk amongst the redwood forests in Big Sur. Take a signature selfie at the Bixby Bridge, perhaps the most distinctive landmark on the route, once the highest single-span arch bridge in the world, stretching 700 feet over the canyon floor, which lay 280 feet below.

While San Francisco is a big city with plenty of tricky driving—especially on the steep and perilous hills downtown—it’s worth visiting for at least a day or two. Touristy but fun, Fisherman’s Wharf is a good place to duck into a small restaurant and enjoy a steaming bowl of cioppino, a fish stew in a tomato-wine sauce that includes a wide variety of local seafood, from clams and mussels to crab and scallops (pronounced “chip-eeno,” local lore says that the name came about when local fishermen would finish the day at the dock and “chip in” whatever they had to a communal stew).

From San Francisco, head north on Interstate 5 and get to the forests faster. In the interlinked national and state park, which covers 139,000 acres, spend time under the tallest trees on earth, reaching higher than a 30-story building. The canopy is so high above, the forest below feels a little bit like a fairy tale. Famously, you can drive your car right through one of the massive trees. Even better, rent a bike and navigate a series of trails, which have been repurposed from old logging roads.

Rather than returning to the I-5, head straight north on Route 101, which winds along the edge of the ocean. The views are rugged and dramatic. At Pistol River, check out the ever-shifting dunes and massive, monolithic rocks that sit just off the crashing coastline. In the small town of Gold Beach, walk and swim at their long stretch of beach, check out the local shipwreck (the Mary D. Hume), and snack on fish and chips. Then, gather your courage and roar up the Rogue River, best seen from the deck of a jet-boat.

Parodied on shows such as “Portlandia,” Portland often lives up to the famous, oft-repeated local slogan, “Keep Portland Weird.” Stay in a tiny house hotel, where open-air jam sessions are a favorite evening activity. Dine at a multiple-course, all-vegan dinner that includes several types of locally grown edible flowers. Head to a small village of food trucks, including one with a built-in tandoori oven. Then, grab a pint at the Breakside Brewery, one of the leaders in a city known for its craft beers.

The most glaciated peak in the continental United States, the white summit of the 14,410-foot tall Mount Rainier soars above the surrounding Washington valleys, visible for miles in all directions. It’s an active volcano and the source of five different rivers. The national park covers more than 235,000 acres, with all sorts of ways to enjoy the outdoors. Hike through the subalpine meadows at Paradise or the dense forest of Douglas Firs and western red hemlocks, as well as cable bridges and roaring waterfalls at Ohanapecosh. And head to Sunrise, which sits at 6,400 feet, and has an extensive trail system, as well as the best views in the park—of Mount Rainier, but also of the Emmons Glacier and a variety of other volcanic peaks in the Cascade Range.

The largest city in the Pacific Northwest, Seattle’s glassy skyline rises next to the waters of Puget Sound, and the signature Space Needle, built for the 1962 World’s Fair, stands out among the rest. Head to the top and walk the glass floor there for a vertiginous view. Nearby, the Pike Place Fish Market pulsates with energy, fishmongers tossing the day’s catch to one another before wrapping them up for customers. It’s been a long drive, but what if you’re not quite ready to reach the end of the line? Just keeping driving—perhaps onto a ferry steaming out into the Sound, with an array of scenic islands awaiting your discovery.