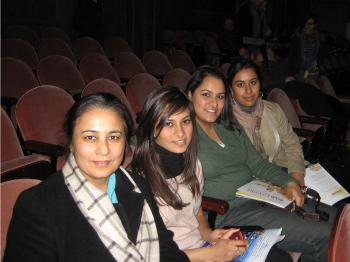 ‘We need to have more of these kinds of shows’

Among the audience members was Mrs. Kansal, a wife, homemaker, and a mother of three. She told us her overall impression of the show: “It's very soothing; it's very controlled, like how they are dancing. It looks very easy, but I know it's not easy. It's very difficult. It's just beautiful. … What [DPA] is showing here—It's divine dancing, very spiritual.”

The shows meaning was conveyed on an ethical level to Mrs. Kansal as well. She said, “That's real love, don't hate anybody, don't fight. This is the message [of the show]. We need to create a lot of peace. There is so much war and fighting going [on] around the world, we need things like this to invoke the spirituality within us. And I think it is beautiful, I love it!”

When asked how the show's meaning related to the world as a whole, she said, “This is what I see, life is becoming too fast. So people are drifting away from inner beauty and peace, because they don't have time to connect themselves with the higher self. And they are just running.”

“I see kids around computers, and it's just loud music. I was telling my daughter that this music is so soothing. People should listen [to] this kind of music.”

“You are in a meditative state. You know when I am watching this show I'm just in a totally different state of mind. I just love it. I'm totally in love with this music, and if they would sell [it] I would buy the CD,” she said laughing.

Mrs. Kansal went on to say, “I think they need to start showing these kinds of things on TV, [because] whatever we see [and] we hear, it impacts us.”

“Anytime I turn the TV on, any shows, any news, it's all violence, all war, all bad stuff. They keep repeating it. Murder—they kill this person or that person. If they start showing something nicer, about the heroes, [like] somebody doing something nice to somebody, people will feel like doing those things.”

“It's not people; people are not bad. It's just that whatever they see, they follow, you know, so this is what I feel. We need to have more of these kind of shows around us.”

The Epoch Times is a proud sponsor of the Divine Performing Arts 2009 World Tour.
For more information please see DivinePerformingArts.org