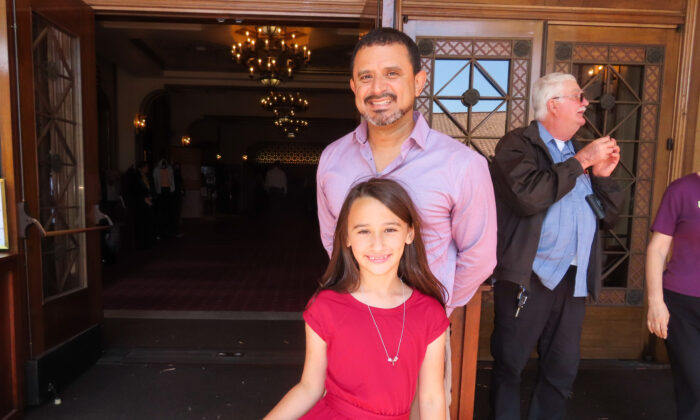 Francisco Rodriguez and his daughter at the Shen Yun Performing Arts performance at the Granada Theatre in Santa Barbara, Calif., on May 28, 2022. (Alice Sun/The Epoch Times)

SANTA BARBARA, Calif.—Francisco Rodriguez, lead effects animator at Walt Disney, said both he and his daughter loved Shen Yun Performing Arts after seeing the company perform at the Granada Theatre on May 28.

“We love it. I like … the dancing, and the music, and the live orchestra,” Mr. Rodriguez said.

Based in New York, Shen Yun is the world’s premier classical Chinese dance and music company, with a mission to revive China’s culture as it was before decades of communist rule all but destroyed it. The company features story-based dances that showcase different parts of China’s regions as well as the essence of China’s history and culture.

Mr. Rodriguez said Shen Yun provides a comprehensive view of the history and culture of China.

“It’s like you get to see their culture from all different angles, such as the villages and the cities,” he said.

Mr. Rodriguez added that he enjoyed all the different colors in Shen Yun, and how the animations in the projected backdrops interacted with the dances on stage. He also appreciated learning about the spiritual aspect of Chinese culture through Shen Yun.

“It’s nice to know that people are still focusing on tradition and focusing on spirituality,” he said.

Cody Segal, who is self-employed and also an artist, said he really enjoyed the spiritual aspect of Shen Yun.

“It was great to see that on stage, in the blending of the beauty and the harmony,” Mr. Segal said. “There was such a balance in the choreography. And then seeing that combined with the spiritual undertones, I thought that was fantastic. … It actually resonated with me, and I thought that was beautiful.”

Mr. Segal said he had never seen a performance like Shen Yun before, and he enjoyed all the different facets of the performance.

“I love the costumes. The choreography was great. The music was fantastic,” he said. “I loved how the imagery blends so seamlessly with the action on stage. It was just mind-blowing. I’ve never seen anything like it,” he said.