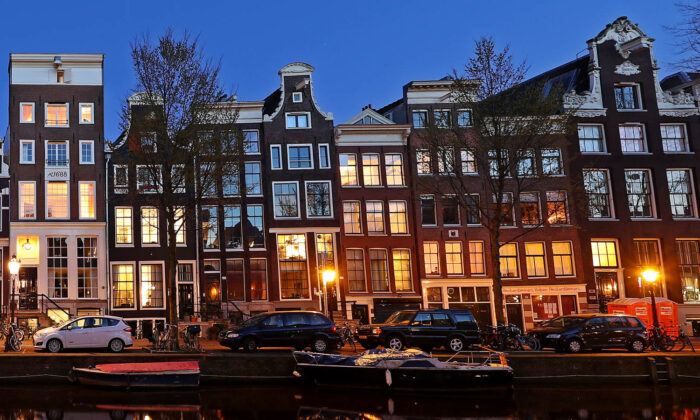 A view of houses in Amsterdam. (Dean Mouhtaropoulos/Getty Images)
Travel

‘We have nothing to hide’: Why Dutch People Don’t Mind You Peering Into Their Homes

For many visitors to the Netherlands, one of the great discoveries when wandering through the streets of Amsterdam or other towns and cities is that you can often take a look inside people’s homes when it gets dark.

At a time when coronavirus restrictions are confining people all over the world to their homes—with only a window for contact to the outside world—this national quirk seems even more intriguing.

The Dutch themselves don’t think it unusual. It’s so interwoven in their culture that researchers have struggled to figure out exactly why people in the Netherlands care so little about their privacy.

Those who look for an explanation for this rather curious exhibitionism quickly get caught up in major sociological tangles.

Is it an “I’ve-got-nothing-to-hide” or a “look-what-I’ve-got” mentality? Or both?

The most popular explanation stems from the Protestant religious tradition of Calvinism, which insists that honest citizens have nothing to hide.

Closing the curtains could indicate otherwise. And by letting people have a look inside, you let them know: Look, I’m a decent person!

A desire to show off possessions could also be an explanation.

As standards of living have risen over time, materials and interiors have become more luxurious and opulent. And even now people like to show off their custom-made open kitchens, designer couches, or latest-model flat-screen TVs.

Some city guides explain the openness as a way that business was done in the old days. People would leave curtains open to show off a room full of the finest of furniture, decorations, and art as a way of proving to merchants that they were trustworthy.

Others say it’s a tradition that only really dates back to the 1950s, and has already begun to change.

Anthropologists Hilje van der Horst and Jantine Messing researched the phenomenon in 2006 and observed that people in tight-knit neighborhoods were more likely to leave their curtain open—and more likely to decorate their windows with statues, vases, and (fake) flowers.

Another reason, of course, is the desire of residents to watch the world go by. It’s fair to say that Dutch people typically like to look outside and see the lights, the hustle and bustle of the streets, and people walking by.

The interaction between inside and outside helps foster the open culture for which the Dutch are well known.

As a Dutch citizen, I grew up in houses without curtains.

And when I moved out, I didn’t use them for the first 10 years. I have them now because I have a bigger home and they bother me less.

My mother, Astrid (interviewed below) still has no curtains, which is common in De Jordaan, the now gentrified working-class district of Amsterdam that I grew up in and where she still lives.

Here, four Dutch residents with no curtains tell CNN Travel about why they still like to peek and be peeked at through their unadorned windows.

When I moved to live here in 1987, I tried curtains, but I found them smothering and removed them. My street is quite narrow, but until 10 years ago I had no neighbors opposite. Only a garage in a low-rise building and a company building in the distance. So there was no need. Besides, I don’t like them.

Ten years ago, they started to build apartments just across the street and I had to get used to close neighbors, about 10 meters from window to window. Soon it became clear that my closest neighbors had roller blinds which they shut down day and night, so the need for me to get something in front of my windows wasn’t very urgent.

Why I don’t like curtains, I’m not sure. I never had them apart from for a short time in the ’80s. Maybe I don’t like the bourgeois side of it. Maybe because I’m too lazy to do anything about it, but I don’t care on the other hand.

Until a year ago, I had neighbors next to me who were real Jordanesen [original residents from the Jordaan]. They lived on the ground floor and liked showing everybody their knick-knacks, porcelain figurines, and cozy lights. Especially during the holidays, their house was filled with colorful fairy lights and other Christmas decorations. Even guides with groups of tourists stopped by to have a look.

A lot of the original inhabitants of De Jordaan like to showcase their interior. Sadly most of them have passed away or were forced to move because of the rental and house prices going through the roof.

Since there’s been an increase of outsiders—mostly expats—more and more curtains close. Also young people tend to want to have more privacy. Unfortunately, the openness disappears; the lights in the streets coming from the living rooms, the social control that comes with it and the “gezelligheid” [a Dutch concept meaning conviviality, coziness, or fun]. It’s getting darker every year.

For the past five years I’m living in this house, on the third floor—so pretty high—and I always thought people couldn’t look into my living room which is in the front part facing the street and the apartments opposite. From across the street it’s too far away and from the street it’s too high. I thought.

Then I was buying groceries across the street and my partner turned on the lights. I looked up and realized people passing by could see everything happening.

I wasn’t aware of this, but it will not make me use any blinds or curtains. I never have, primarily because of aesthetic reasons. I don’t like blinds and they are not practical since my windows open inward. Curtains I find a bit stuffy and they don’t match my modern interior.

Besides the aesthetics and stuffiness I like to see the outside lights when it’s dark. I don’t mind neighbors looking into my living room. It’s quite a distance and I’ve never seen anyone with binoculars lurking outside my house, so I don’t care.

I think a lot of Dutch people don’t use curtains because we like the light and we don’t have anything to hide.

When I was a kid I delivered the mail as a side job and during my shifts I could follow popular TV shows by riding my bike from house to house. I like peeking in people’s homes at night, especially the canal houses in Amsterdam with their beautiful ceilings, paintings, and closets. I’m not staring or anything, just peeking inside while walking by.

I have lived here for over 25 years, but it’s only for the last 13 years I’ve not had anything to cover my windows.

Thirteen years ago, I demolished my old house and built the one I live in now. Buying curtains was on my to-do list, like hundreds of other things, and apparently the curtain part wasn’t that urgent since I still have uncovered windows in the living room.

The room is located directly on a street and canal in Edam, a touristy fishing village next to Volendam, where I’m originally from.

There are always people walking by. Sometimes they stop and stare. When I wave they get shy, promptly aware of what they were doing, but most of the time they smile and wave back. I don’t mind.

I like watching tourists and the interaction. I think otherwise I might feel secluded and this way I am always in contact with the outside world. It’s an extension of my house. It’s “gezellig.”

I understand why people peek inside, I enjoy it, too. Other people’s interiors inspire me and the best time to do so is at night when it’s dark and the lights are on.

In the end I do want curtains, for sure. It’s on my list again now I have more time due to corona. Why? Because I want to have a choice. To close them, or keep them open.

In December 2016, I moved from the city center of Amsterdam to IJburg, a relatively new suburban area with lots of space and nature around.

My house is located next to a big lake called IJmeer so the views from the front of the house are spectacular. One side of my house borders several walking paths and the other side a courtyard and some apartment complexes, but not close by.

I have a panoramic view on the water and a city beach and I don’t want to block that view with any curtain or blinds. Day or night.

The view during sunsets are amazing and I get very happy waking up and walking into the living room with my coffee and looking outside. It creates a feeling of calmness and freedom and with the city life continuing outside it gives that city feeling I need.

I can’t imagine living somewhere secluded on a meadow. I like the wideness and the water in particular. The view is a very pivotal part of the reason I’m living here.

To create some privacy, I placed my couch in a way I can relax and lay down without people noticing.

At my grandparents’ house, the curtains were always open, too. I think they didn’t mind people looking inside. Their generation was more open and more social anyway. Everybody was always welcome.

I myself only look at people’s houses when I see something I like or that inspires me, like a beautiful furnished room or a beautiful garden. I have no need to watch people eating or sitting on the couch watching television.