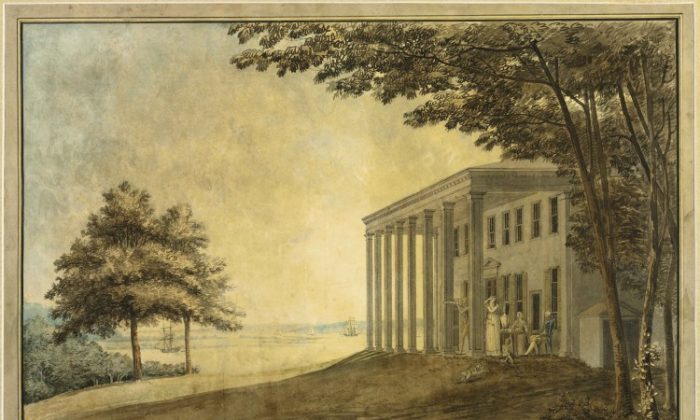 NEW YORK—In two days of auctions, Jan. 25–26, Sotheby’s annual Americana Week auctions raked in a total of nearly $10 million. The Important Americana auction was led by a watercolor drawing titled “A View of Mount Vernon with the Washington Family on the Terrace.”

Dated July 16, 1796, the watercolor drawing is by architect Benjamin Henry Latrobe, who presented it to then-president George Washington as a thank-you for hosting him during a visit to Mount Vernon.

The watercolor was put up for auction by a descendant of John Augustine Washington III, whose family was the last of the Washingtons to live at Mount Vernon. It now returns to Mount Vernon after the Mount Vernon Ladies’ Association purchased it at auction for $602,500.

The Mount Vernon Ladies’ Association is the first historic preservation society in the country. Founded by South Carolinian Ann Pamela Cunningham in 1853, it was made up entirely of women who wanted to save the deteriorating historic estate of George Washington.

The English-born architect and civil engineer Latrobe left journals of his visit to the estate, which he described as having “no very striking appearance,” with portions of it “in a very indifferent taste”—all in all, quite typical of a gentleman’s estate of the time.

However, in his writings, he praised the first president and his family for their ease, hospitality, and good humor. In the “The Virginia Journals of Benjamin Henry Latrobe” (1795–1798), the author detailed at length the meals and conversations he had with the first family. Clearly, Latrobe’s distinguished company left a deep impression on him.

It is believed that the figures in Latrobe’s drawing are the president, Mrs. Washington, her granddaughter Nelly Custis, secretary Tobias Lear, and one of his young sons, playing with a puppy. These would have been the party at afternoon tea.

The top lot of the auction was a Samuel Talcott Chippendale carved desk-and-bookcase circa 1765–1775, which sold for $1.08 million, more than doubling its high estimate of $400,000. The bookcase came with three books of its time and is in excellent condition, retaining the original finish and brass accents.

The other piece of furniture to take center stage was a Chippendale carved and figured mahogany chest-on-chest attributed to Benjamin Frothingham of Charleston, Mass., circa 1770, that fetched $194,500, exceeding a low estimate of $150,000.

The chest-on-chest form is representative of a regional case form made in the Boston area and on the North Shore of Massachusetts. It is from the collection of Dr. Larry McCallister, which also includes decorative arts, silver, and fine arts.