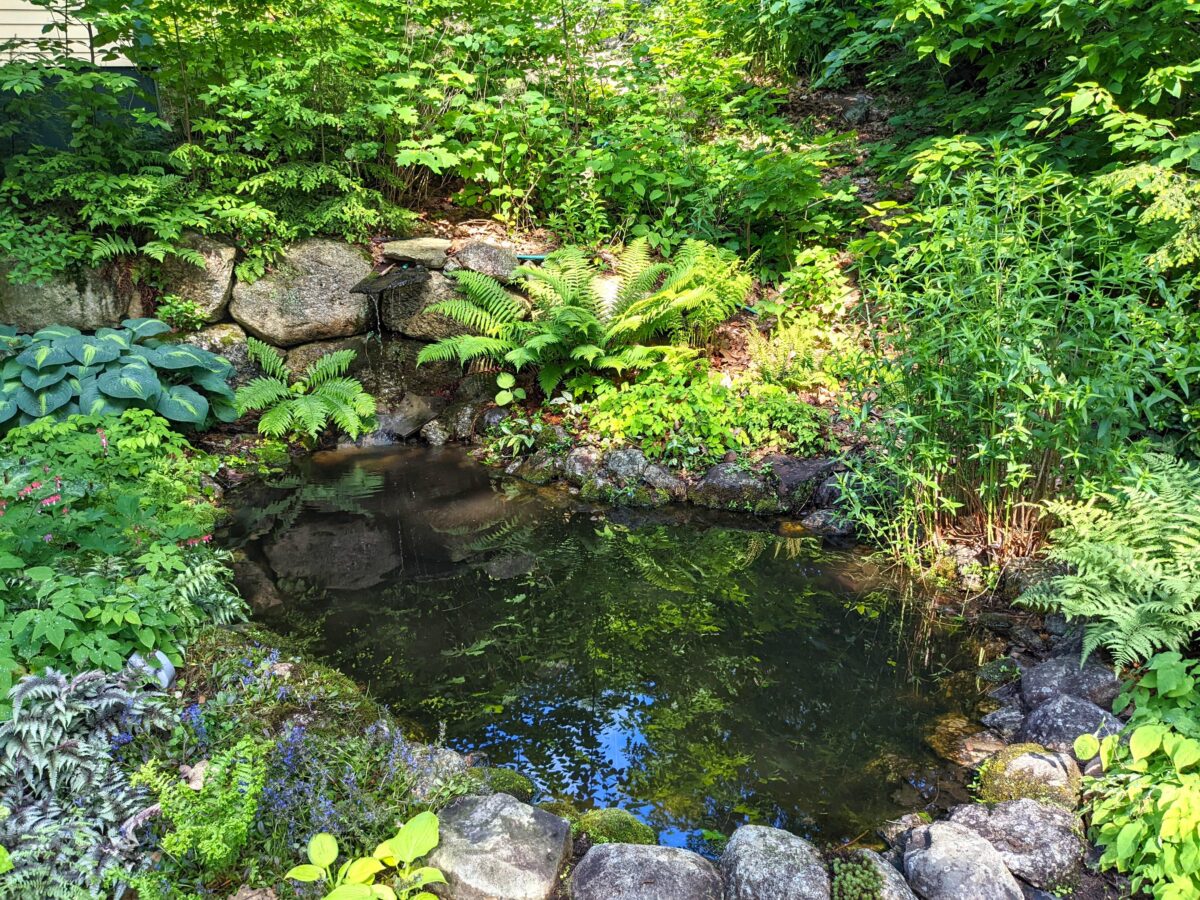 This is the pond in my own yard. It's got a waterfall and is a gathering place for frogs, chipmunks and humans too! (Tim Carter/TNS)
Home

Water in Your Yard Creates Peace

Before I got married, I was invited to lunch with my future wife and her parents at a restaurant on a floating barge tied up on the north shore of the Ohio River. At the time, in the early 1970s, I had no idea restaurants like this existed in Cincinnati. In fact, my future father-in-law had built this restaurant with a business partner and had subsequently sold it.

While we ate, I looked out the windows in awe as giant tows chugged by, pushing 15 or more barges loaded with coal. After lunch, we drove to a 240-acre piece of land my future father-in-law owned with that same partner. We parked next to a magnificent stone manor, got out of his car and walked a short distance to a breathtaking view of the mighty Ohio River.

I was spellbound. My future’s wife’s father then said, “Nothing enhances the value of real estate like a view of water.” Those words were seared into my brain from that moment forward.

You know you can’t magically summon a body of water to appear on your property, but you can enhance your yard, patio or deck with a water feature as small as a fountain or bird bath, or large enough to dunk a VW Beetle.

I’ve had small koi or fish ponds at my last three houses, and I have one at my current home in New Hampshire. The Internet is full of advice on how to build a pond. I’ve tried all sorts of methods. I believe I’ve finally come up with a formula that creates a natural-looking pond and keeps pond maintenance to a minimum.

The first pond I built 45 years ago was made with concrete. I dug a depression in the backyard that was the size of a two-person jacuzzi. Fortunately, I had enough fall that I could put a drain in the bottom to empty out the water. This allowed me to clean the pond.

The concrete was 3 inches thick, and I put chicken wire in it to strengthen it. The day after I poured the concrete I applied a 3/4-inch-thick layer of cement stucco over the fresh concrete. I pressed thousands of pieces of rounded gravel into the stucco to make it look better.

This pond worked really well, but it was not easy to reach down to unscrew the drain plug. There was no electricity to the pond so I didn’t have a pump or waterfall. This pond would transform to a green swamp in no time. It was a maintenance nightmare, and the fish would die from lack of oxygen.

My next pond project involved a cheap plastic liner that had two different water levels in it. This is a good idea because, as you’ll discover, the key to having clear pond water is to have certain aquatic plants that work to keep the pond healthy and the water clear.

The house I currently live in has a magnificent pond that I didn’t build. The previous owner had it installed. The liner of the pond is a giant sheet of black commercial rubber roofing. It’s been installed now for 20 years and has never leaked.

Installing the rubber is simple. You just dig a hole that’s the size, depth and shape of the finished pond you desire. Be sure to incorporate different levels. You then unroll the rubber and set it in the depression with enough excess to lap up onto the ground surrounding the pond. I have about 16 inches of rubber ringing my pond. It’s covered with granite boulders, plants, moss and so forth in order to completely hide the rubber.

I also have a waterfall. This waterfall does three things. It adds oxygen to the pond water. The falling water makes a relaxing sound. And the splashing water makes the surface of the pond move ever so slightly, drawing your eye to it.

Frogs, chipmunks, squirrels, litter peeper frogs and who knows what else are attracted to this oasis. It’s very soothing to sit by the pond reading a book or just relaxing as a breeze blows by.

If you really want to go whole hog, you might want to build a small stream that has several small waterfalls within it. This stream eventually feeds into the pond. A recirculating pump in the ponds sends water to the top of the stream.

Think about it. When you go on a hike and come to a moving stream, you almost always stop to watch the water move. Most humans are mesmerized by moving water. I have my own thoughts as to why, but it really doesn’t matter. You know that the babbling sounds of water moving through a stream fills you with happiness. That should be your goal: Create a water feature on your property that will bring a smile to your face every day.

To keep maintenance to a minimum, be sure to think about covering your pond with some sort of screening to capture fall leaves. You want to keep these out of the pond so you don’t end up with an overload of rotting organic material that could foul the water.