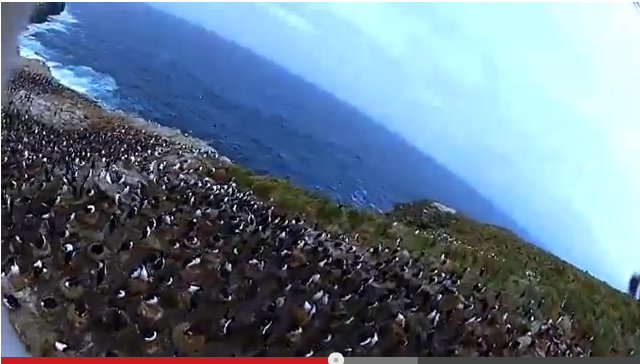 A photo of a penguin colony taken by a spy egg-cam stolen by wild bird. (www.youtube.com/user/JohnDownerProd Screenshot)
Animal videos

A wild bird, intrigued by a spy egg-cam planted by John Downer Production—a company that specializes in making wildlife films—decides to fly off with the camera and in the process captures the first ever aerial footage of a rockhopper penguin colony shot by a flying bird.

This short clip, which had been viewed on YouTube more than 65,730 times, is part of the company’s new series “Penguins – Spy in the Huddle (Waddle All The Way).”

Rockhopper penguins are among the smallest of the world’s penguins. They are distinguished by the yellow stripe above each eye that projects into a spiky yellow and black crown of feathers on their heads. They have red eyes, a short reddish brown bulbous bill, and pink feet and legs. The females are slightly smaller than the males, but have similar plumage. The character Lovelace, from the Oscar-winning animation film from Pixar, “Happy Feet,” was a rockhopper.

I-Am-Bored.com – A list of sites for when you’re feeling bored