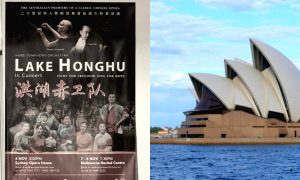 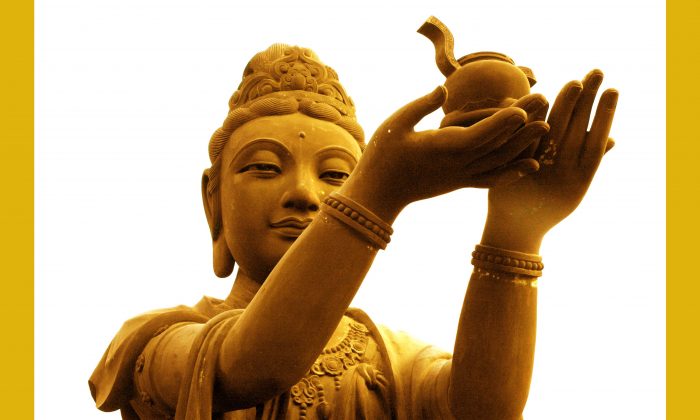 One of the statues of a bodhisattva giving offerings to the Tian Tan Big Buddha located at Ngong Ping, Lantau Island, in Hong Kong. (Sun Mingguo/The Epoch Times)
Chinese Culture

Wan Hui Was Not Foolish After all

Wan Hui was born in a Zhang family in Wenxiang (now Lingbao County, west of Henan Province) during the Tang Dynasty. His mother prayed to the Goddess of Mercy for a son and eventually gave birth to Wan Hui. But Wan Hui was mentally slow. He only started to talk at the age of 8 or 9. His parents did not like him and raised him like a beast.

Wan Hui’s brother was serving in the army at the border in Anxi Town, and there had been no news from him for many years. His parents thought he had died and cried day and night for him.

Wan Hui saw how sorrowful his parents were, and he knew why. One day, he knelt before his parents and said, “Are you in such sorrow because there has been no news of Brother?” His parents were surprised that he knew about it. They told him they were indeed upset. Wan Hui stood up and said: “Think of what my brother might need—clothes, shoes, hats, food, or anything. Get them ready. I’ll look for him.”

His parents wasted no time in getting ready the things they thought their son might need, and Wan Hui set off for the border the next morning. But he returned that very night and told his parents, “My brother is alive and kicking at the border.” He took out a letter his brother had written, and sure enough, it was in the elder son’s handwriting.

His parents were surprised. It was over 10,000 Chinese miles from Wenxiang to Anxi, but it had only taken Wan Hui one day to make a round trip. They stopped calling him a fool and instead called him Wan Hui, which literally meant covering 10,000 Chinese miles and back.

When the monk Xuanzang (Tripitaka in the classic novel “Journey to the West”) travelled to India to obtain Buddhist scriptures, he saw an inscription on a niche in a temple that read “Bodhisattva Wan Hui is demoted to Wenxiang to attain enlightenment”. He bore the words in mind. On his return journey from India, he made a special trip to Wenxiang. He asked the villagers: “Is there an eminent monk by the name of Wan Hui? Could you bring him here?”

Wan Hui came, and Xuanzang gave him a robe, a bowl, and a bottle as presents. When Empress Wu Zetian, who ruled China from 684–705, heard about it, she summoned Wan Hui to the imperial court and sought his advice and predictions on many issues. Wan Hui’s prophecies were accurate.

Official Zhang Yizhi was renovating his residence at that time. Wan Hui pointed to the house and said “Jiang zuo,” which meant “turn into”. Nobody knew what he meant. But not long after that, Zhang was killed in a coup that overthrew Wu Zetian. His house was turned into a prison.

Wan Hui said to Empress Wei and her daughter Princess Anle on one occasion that they would be killed by Sanlang (the third son). Empress Wei was the empress of Emperor Zhongzong of the Tang Dynasty. For fear that she might be dethroned, she poisoned Emperor Zhongzong. She was thirsty for power and did not bother about Wan Hui’s divination. She was eventually killed by Li Longji, the third son of Emperor Ruizong, as Wan Hui had predicted. Li Longji eventually inherited the throne as Emperor Xuanzong.

Before Emperor Ruizong ascended the throne, he used to travel around incognito. Whenever he did that, Wan Hui would stand in a crowded area and shout, “The Emperor is coming!” Wherever he stood, sure enough, Ruizong would pass by that spot a day or two later. And Wan Hui was right; Ruizong was put on the throne eventually.
Crown Prince Huizhuang was Ruizong’s second son. When Empress Wu Zetian asked Wan Hui to tell his fortune, Wan Hui said: “This boy was reincarnated from a big tree spirit in the Western regions. Keeping him will benefit his brother.” Ruizong indeed fathered another son, Shen. Shen was well-built, and he ate and drank a lot.

In the years of Jinglong (707–710), Wan Hui went in and out of the palace, official residences, and commoners’ houses. The rich, the influential, and ordinary folks came to him for advice.

Princess Taiping believed in Wan Hui’s abilities and built a house next to her own residence for him. In the year of Jingyun (710–711), Wan Hui passed away in this house. Before he breathed his last, he sent someone to get river water from his hometown. His disciples could not find it. Wan Hui had to point out explicitly that the river water could be found right before the house.

Everybody started digging right in front of the steps, and all of a sudden, river water came gushing out. Wan Hui had some of the water and passed away after that. The water from that well still tastes sweet to this day.

(Story from “the Extensive Records of the Taiping Era”)