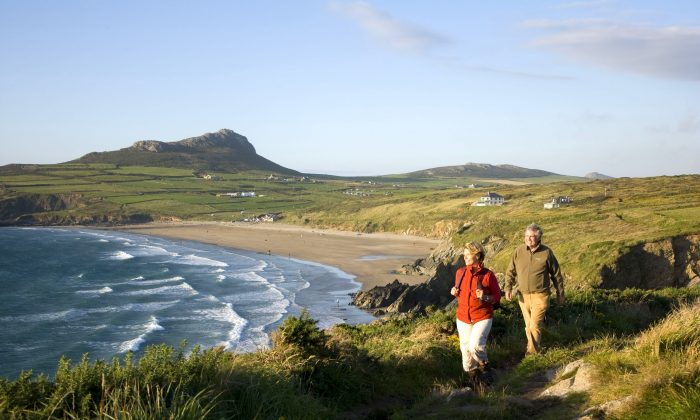 Wales: Of Saints, Dylan Thomas, and the Coast Path

I must admit I didn’t know a lot about Wales before recently venturing there to trek its stunning series of coastal paths.

I was, however, well aware of one of Wales’s most famous sons, the poet Dylan Thomas. After World War II, when Thomas was one of the best-known poets in the English-speaking world, he moved to Laugharne on the wild and unpredictable Taf estuary in southern Wales. At that time the town was most easily accessible by boat.

We spent the night in Laugharne at Brown’s Hotel, one of Thomas’s favourite drinking holes. We thought of him as we enjoyed a night in the town he called “a legendary, lazy, little black magical bedlam by the sea.”

The next morning, after a breakfast of kippers, we walked along the shore to the Dylan Thomas Boathouse, where the hard-drinking poet lived in the latter years of his short life. Nearby is the tiny shed where he wrote some of his major works, including “Under Milk Wood.”

The Boathouse is now a museum containing Thomas memorabilia and most of the original furniture. There’s an exhibition area where visitors can view a short film, a tearoom, and a shop. On the terrace overlooking the estuary we had tea and bara brith cakes served by Maggie, who sat and chatted with us.

Thomas lived and wrote here for about four years. During this time he was able to profit from his fame and brought his parents out from Swansea. They lived at Pelican House across from Brown’s Hotel. His father was ill and going blind in his old age, which prompted Thomas to write arguably his most famous poem, “Do Not Go Gentle Into That Good Night.”

Thomas himself died in November 1953 at age 39, reportedly after drinking 18 straight whiskeys while also suffering from undiagnosed pneumonia. Fittingly, his wake was held at Brown’s Hotel. We visited his touchingly simple grave in the Laugharne cemetery. It was a splendid sunny day, and seemed as it might have been back in 1953, with nary a modern-day sound. All we could hear were a few horse hooves beating on the stone roadways.

The Wales Coast Path consists of a series of walking paths running 1,400 kilometres along the coastline, from Chepstow in the south to Queensferry in the north. It’s the world’s first uninterrupted route along a national coast and winds through beaches, cliffs, woodlands, and hills, as well as city waterfronts, fun-parks, and the odd historic castle.

The Coast Path is the world’s first uninterrupted route along a national coast.

After a quick lunch in Stackpole we headed along the path to Barafundle Bay Beach, our aim being to reach St. Govan’s chapel at St. Govan’s Head in Pembrokeshire—the smallest chapel in Wales. But we ran out of time, so ended up going there by car.

Even with a GPS, the chapel was hard to find. Of course, this only adds to its charm. And we had no trouble believing the legend behind the founding of the chapel: St. Govan was hiding from pirates when all of a sudden an opening in the cliffs appeared, allowing him to find cover. The chapel is built into the cliff, and the steps to reach it are very steep.

Southwest Wales is a land of saints and saintly characters. At around the same time that St. Patrick was doing his missionary work in Ireland circa the sixth century, Wales’s patron saint, St. David, was bringing Christianity to his country.

At Porthgain, near Blue Lagoon, we embarked on another lovely walk through ancient bracken, gorse, hawthorn, and bramble hedges, originally built to keep sheep safe from the cliffs and today, to keep hikers from falling to a watery grave. The only other creatures sharing the path with us were rotund dark grey slugs and snails. When we dared to look below over the steep cliffs, we saw fat grey slugs of another kind: huge North Atlantic seals sunning themselves on the tiny beaches in the numerous coves.

At Ramsey Island we visited a most isolated spot and saw a cave where, legend says, St. Justinian would make rebellious monks spend the night. If they survived the ordeal, they had repented. If the sea claimed them, well, so be it!

Justinian came to a macabre end when some of his monks, fed up with his harsh rules, decided to cut off his head. It is said that he then walked on the water across Ramsey Sound back to the mainland, carrying his severed head under one arm. A small chapel was built where he put down his head, the ruins of which are still visible today.

For some reason, after I heard this story, the words of Thomas’s retort to death came to me: “Do not go gentle into that good night. … Rage, rage against the dying of the light.”

Our final connection with a Welsh saint occurred as we walked from the chapel of St. Non (St. David’s mother) all the way to Port Clais. Here, we had a chance to dip our hands into St. Non’s well, renowned for its healing powers.

We were only able to traverse a fraction of the Coast Path that extends the full length of the country, but we enjoyed it so much we vowed to return.