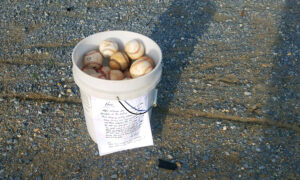 A waitress is receiving tons of praise for returning a customer’s money earlier this month, after it was left on a table at a Buffalo Wild Wings restaurant, ABC News reported.

Kaylie Cyr of Auburn, Maine, 24, was working the dinner shift on March 10, when a man named Glenn Morse came to the restaurant with his friend. When they left, she found $1,700 cash on the table and immediately turned the money in to the manager on duty that night.

It definitely wouldn’t feel right keeping the money if it belonged to someone else.
— Kaylie Cyr

“They just came in for some appetizers and drinks and after they had cashed out is when I realized that they forgot the cash on the table,” Cyr told ABC News. “I looked inside and saw a big stack of $100 bills. You hear those stories where people give those huge tips, but after seeing his name on the envelope, I knew it wasn’t the case.”

The next morning, Morse called the restaurant after he noticed his money was missing, told ABC News.

“When I tried to follow up to find out who returned the money, [the manager] said nobody left a name,” Morse said. “You’d think someone would say, ‘It was me who did that great deed’ and I thought that was very impressive. She wasn’t been looking for a reward or praise. She was just a gracious, great person.”

She sort of exemplifies the habits that make her an awesome employee.
— Louie Golden, General manager

Cyr told ABC News, she wouldn’t have changed her decision, if she found the money again.

“It definitely wouldn’t feel right keeping the money if it belonged to someone else. I know if it was my money, I’d be happy if someone returned it to me, so that was kind of my incentive,” she said.

“She sort of exemplifies the habits that make her an awesome employee,” he said. “She has extremely good qualities that we look for in everybody we hire.”

One week after Cyr returned the cash, Morse and his friend came back to the restaurant and rewarded her with a $100 bill,  she said.

“They told me how grateful they were and how much it reflected on my character,” she said. “Obviously, I was grateful for the $100. It was very nice of them.”