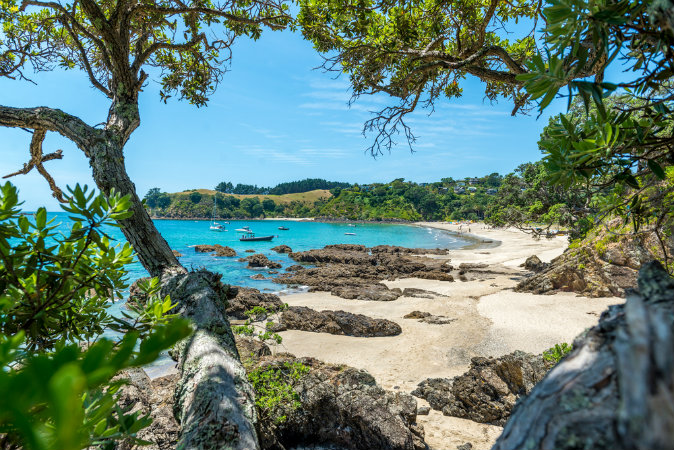 The fast ferry made the trip from Auckland to Waiheke (Why-HICK-ee) Island in a flat 35 minutes. One of the many volcanic islands that dot the bays around Auckland, Waiheke has long been a favorite of New Zealanders (it is where they go to get away from it all) and it is easy to see why.The scenery is simply stunning. Jagged black basalt cliffs soar over seas ranging from blue-grey to midnight to aquamarine. Pretty black sand beaches tuck themselves between towering walls of lava. At low tide, pools stained with multi-colored algae offer up their micro world for exami- nation. Here and there, exposed sandstone and feldspar paint the rock walls in golds and reds. And deep, luscious green grasses have taken hold in the rich volcanic soils.

What is perhaps most unique about Waiheke is that a series of interconnecting trails criss-cross the island, making its beauty accessible to anyone willing to make the effort. It is for these trails that I came to Waiheke – I hoped to complete two of the loops. I picked up a trail guide from the brochure rack inside the ferry dock and asked which of the trails would have the most stunning scenery. The man at the information counter suggested that I take the track on the north side of the ferry dock by going around the dinghies at the water’s edge, then following the bay around until I picked up the path. As an aside he added, “Ah, well, it’s high tide at the moment but I think you should make it around the rocks OK.” That should have been my first clue about what I was getting myself into.

The Wild and Wooly West Coast of New Zealand

I followed the black pebbly bay until I reached a cluster of rocks projecting out into the water. I might possibly have been able to pick my way around them were it not for the huge Live Oak tree growing out from the top of the pile of rocks. I decide the only way to get to the other side was to inch around a narrow ledge on outer edge of the rocks until I reached the tree, then go up and over from that point on what appeared to be a vague path.