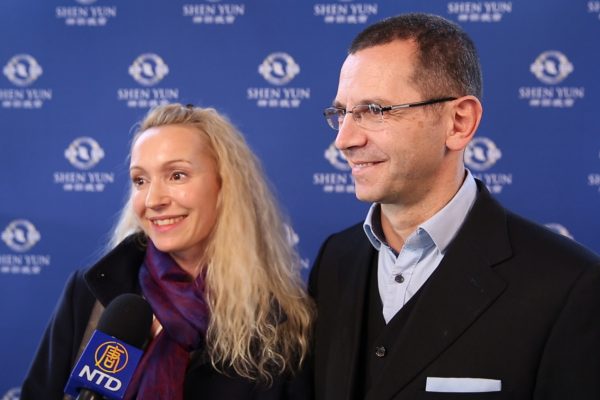 The Radumilo couple at the last Shen Yun performance at the BFM in Geneva on March 3, 2019. (NTD Television)

Tina, a molecular biologist, and her husband Slobodan, Vice President and General Manager of Diabetes Care EMEA, a global medical technology company, were at the Bâtiment des Forces Motrices (BFM) in Geneva with their three sons.

“You have three ingredients well used together. One of them is simply that each piece has a story, and with two hours of showtime, we’re able to perceive the true beauty of the Chinese culture and history,” Mr. Radumilo said.

“The second is that the costumes are very beautiful and the lighting was fantastic,” he said.

“Then, the artistic performance was really phenomenal. I think the skills of each dancer and each performer were fantastic,” Mr. Radumilo said.

Indeed, each dance tells a story: an excerpt from a great novel of Chinese literature or a Chinese legend, the daily life of one of the many ethnic groups which populated China, or a story based on real events in contemporary China.

The costumes, each handmade, shimmer in the light with brilliant colors and otherworldly fabrics. They recreate the dress of the imperial Tang Dynasty courts, of celestial beings, the Mongolian peoples, and so on.

But it is also the skills of Shen Yun dancers, the world’s foremost trained artists of classical Chinese dance, that make the difference. Classical Chinese dance is a complete dance system that is thousands of years old, and has been enriched over the years by the dynasties.

Mrs. Radumilo described many of the ethnic and folk dances presented by Shen Yun, which show the wide diversity of China. She pointed out the Mongolian horseback riders in the steppes, a piece with all male dancers, and the graceful women of the Yi, spinning in their brilliantly colored skirts.

“The story, the joy of life, the colors, the energy too, the male dance was really manly, and the women are really womanly!” said Mrs. Radumilo.

Mrs. Radumilo said she was particularly moved by one piece set in the modern day, which touched had a scene with everyone on their phones. The stark contrast made her think about the addictive effect of technology and mobile phones.

“I really liked it because I have the same problem in my family. So I think we need to start thinking a little differently,” she said.

As a mother of three boys, Mrs. Radumilo was particularly delighted with the attention her children were able to give to the performance.

“They are young but they managed to spend two hours watching the show … They are 7, 11, and 13 years old, they were very attentive,” she said. “They had fun and they were laughing, it was incredible, incredible! So I think that says a lot about the show too!”