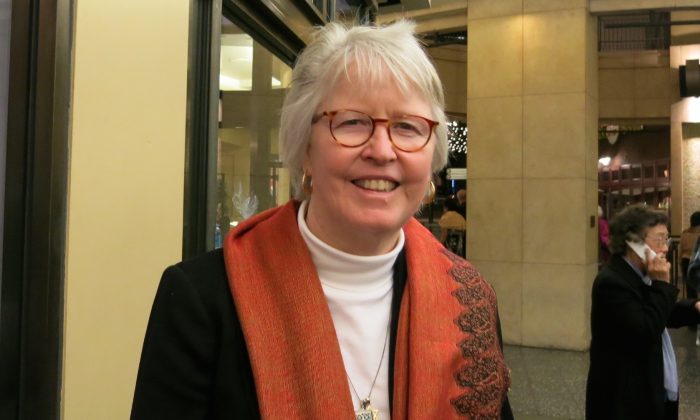 HOLLYWOOD, Calif.—Shen Yun Performing Arts is “uplifting the human spirit,” according to Dr. Lo Sprague who watched the classical dance and music performance Jan. 23 at Dolby Theatre, home of the Academy Awards.

Dr. Sprague wears many hats. She is the vice president of The Guibord Center – Religion Inside Out, a non-profit organization which is in partnership with an advisory council of nearly forty beloved religious and spiritual leaders. They promote major community events that support the community to share in the wisdom and beauty of ancient traditions.

She is also a talented writer, photographer, lecturer and Jungian-oriented psychotherapist.

“Throughout history, almost every culture looked toward the divine for inspiration. Art was meant to uplift, bringing joy to both the people who created and experienced it. It is this principle that drives Shen Yun performers and their art.”

“I thought it was wonderful,” she said. “It’s wonderful that [Shen Yun is] preserving the culture.”

Dr. Sprague sensed the traditional values expressed in the performance.

She felt the emphasis of compassion and of seeking the greater good beyond one’s personal selfishness.

“I think it’s both the dances and message [that] there is something beyond our human interaction here.”

Dr. Sprague saw Shen Yun’s storytelling through music and dance as a “story (that) goes across all religions and all cultures.” “It was lovely to see that,” she added.

Dr. Sprague said the performance was “full of light, and color, and movement, and [it was] very inspiring,” she said.

“I thought the dancing was fabulous; the staging was wonderful,” she said.

Shen Yun features an animated, digital backdrop in which the dancers interact, leaping from the back of the stage, for example, and suddenly appearing in animated form on the screen and vice versa.

“I loved the interaction with the digital imagery; it was very clever,” she said.

“The use of color was spectacular. It was wonderful to see [Chinese] dancers, and to see the different costumes and the different [ethnic] cultures represented,” she added.

Among those in attendance were Nelson and Marilyn Wiechmann, owners of Wiechmann Concrete Inc., a successful construction company.

Mrs. Wiechmann was generous in her praise of Shen Yun’s performance.

Established in 2006, New York-based Shen Yun is a non-profit organization working to bring 5,000 years of Chinese civilization to life through the performing arts. Having performed in front of millions of people across nearly 20 countries, Shen Yun has become widely recognized as a global phenomenon.

Whether examining the costumes or dance movements, Mrs. Wiechmann found the aesthetic nuances of the Shen Yun to be of the highest caliber.

“The costuming is unbelievable, and the way they move, they’re not on the ground,” said Mrs. Wiechmann. “They just float.”

Classical Chinese dance is built on the fundamentals of bearing, form, and technical skill, including many difficult aerial techniques, but being richly expressive at the same time.

Mrs. Wiechmann also enjoyed the spiritual elements of the show, which for her, seemed to resonate on a deeper emotional level.

“It’s very uplifting, it made me cry at one point,” she said. “It’s very sensitive, it’s very beautiful.”

“For [Shen Yun] this spiritual connection is motivation for striving to excel, is the heart behind each movement of the dancer and each note of the musician. It is why audiences can feel there is something different about Shen Yun.”

For Mrs. Wiechmann and her husband, spending an afternoon with the dancers and musicians of Shen Yun’s World Company appeared to be a unique experience for them.

“I loved it,” said Mrs. Wiechmann.