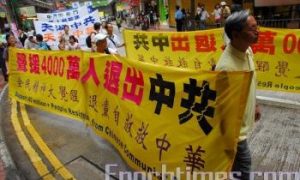 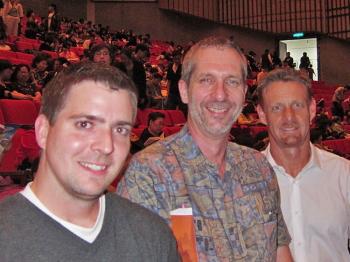 TAIPEI, Taiwan–Shen Yun Performing Arts has been enthusiastically acclaimed throughout the world since it was founded in 2006 with a mission to revive the true spirit of traditional Chinese culture.

New York-based Shen Yun provides the opportunity for people from all ethnicities, cultures, and backgrounds to experience authentic Chinese culture.

In its final performance in Taipei at the National Dr. Sun Yat-sen Memorial Hall on April 21, Shen Yun Performing Arts International Company performed to an audience that included many foreigners.

Steve Winters, vice president of the Taiwan branch of the Silicon Valley-based American NetBase Co. Ltd.; Kyle Park, chief financial officer; and their colleagues, were in the audience enjoying a taste of the 5,000-year-old, divinely imparted Chinese culture.

Mr. Winters had seen Shen Yun abroad previously and said he was very fond of Shen Yun’s artistic presentations and inner meanings. He enjoyed this year’s show just as much and appreciated the Shen Yun dancers’ superb skills in presenting classical Chinese dance.

“I like it very much,” he said. “I like the dancing and the little monks. It’s mischievous.” Mr. Winters was referring to the dance Little Mischievous Monks, in which young, carefree Buddhist monks engage in a little of their own training while the abbot is away, according to the program.

Mr. Park admired the Chinese tradition of respect for the divine and the belief in gods and Buddhas, and he appreciated the traditional culture. “The background—heaven, the divine—impressed me. Though I don’t know about Chinese culture, I understood it. I enjoyed it,” he said.

Mr. Winters said that he didn’t have any background in Chinese culture either, but he had the distinct impression that Shen Yun demonstrated the essence of China’s ancient history and culture. “I like it. … Now I am educated,” he said.