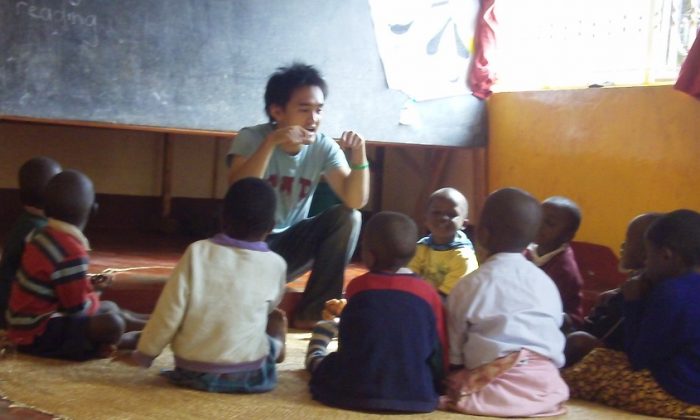 Volunteering in Tanzania (Bren On The Road)
Destinations

Volunteering in Tanzania: A Flashback of My Time Teaching in Moshi, Kilimanjaro

He looked up at me like I was an alien. He’d probably never seen a pasty, shabby haired oriental specimen like me. If I were in his shoes, I’d probably have turned and run, but he just smiled up at me with a fearless curiosity. It’s funny how kids are like that.

His name was Joseph, a tiny 4 year old with a smile that would melt even the mightiest of men. As we sat beside each other on the concrete floor I tapped my finger on the page in front of him; my way of telling him to look down and write. My job today was to teach this one child, out of a class of 20, to write the alphabet, and we were up to the letter…..A. I guess if I had a Chinese alien sitting next to me I probably wouldn’t get much work done either.

Finally, he looked down and attempted to mimic the perfectly scuplted ‘A’ I had written for him. I watched, almost in slow motion, as he pressed the pencil to the page with his tiny fingers, eventually pushing so hard that the lead snapped off with a blunt crack.

He froze for a moment and then looked up at me wide-eyed, and we both smiled at each other before laughing childishly at the now broken pencil lead rolling on the paper before us. His pencil was only about 5 centimetres long anyway, perhaps the length of a toothpick, and he was holding it like a spinning top rather a writing tool.

I turned and shouted out to the teacher.

She looked at me blankly.

I hunted the room for one and to my surprise, found nothing. Not even a sharpener. So, we sat there; a 4 year old Tanzanian kid and a Chinese accountant, staring at our broken pencil wondering how we were going to write the alphabet.

Eventually the teacher came over with a knife, smiling, and sharpened it for us MacGyver style while we both sat there and watched like hungry children. I’m sure she must have been thinking “Geez, does this guy need some kind of magic machine to sharpen his pencil for him?”

How sad. I actually do.

Finally she handed it back to us, and now instead of a 5 centimetre pencil we had a 3 centimetre pencil, which I was starting to look at very differently. This wasn’t just any old pencil anymore. If anything happened to it, well, class would be over for the day. You know that adrenaline spike when you’re on the last stage of Super Mario and you’ve only got one life left? Yeah, it was something like that. Seconds later, Joseph grabbed at it blindly, obviously unaware of the severity of the situation.

“Woah!” I screamed, holding my hands out.

He jumped with fright, and looked up at me, startled. This kid must think I’m crazy.

I smiled as if to say “sorry, just kidding”, and then winced as I watched him etch multiple letter A’s into the page, his fingers wrapped awkwardly around the 3cm stub of lead. I was convinced he was going to break it, but he didn’t. Perhaps he was aware we were in the 4th quarter after all. I stared at him, amazed, admiring the intense concentration on his face as he tried tirelessly to sculpt each letter perfectly, one after the other. His fingers shifted continuously, trying to find some sort of grip on his tiny stump of lead, and as impossible as it was he soldiered on, completely zoned out without a care in the world.

As you can see, it’s a moment I remember quite vividly. But it’s not just because it was funny, or different. It’s because it was the moment that it all hit me- a cold, sudden realisation that the problems here were so much deeper than I had imagined, and that I simply did not have the power to make any real difference to the lives of these kids.

That was my first day as a volunteer in Tanzania. I sat on the bus home and thoughts bounced through my head like a pinball. I had come here to escape the world of corporate indifference, to try and do something ‘meaningful’, to give my time to something that would actually make someone’s life better. But the reality, as I was discovering, was that the problems here were far bigger than anything I could hope to solve.

But, first things first. As soon as I got back to the hostel I dropped off my stuff, grabbed some cash and headed to the store to buy a crapload of pencils.

The first week was the hardest. I soon learned that the kids were not afraid of me. When I told them to shut up they’d laugh and hit me, when I told them to sit down they’d stand up and run around. I quickly learned that to have any influence on them I’d first need to earn their respect. In our status-obsessed world we often have titles and money to hide behind but in their world that was all meaningless. Kids are too smart to be influenced by labels. I knew that if I were to form some kind of bond with them, I had to earn a mutual respect and trust with them based on nothing but my character, and, as they say, kids can be great judges of character. It was a frightening and humbling lesson – I’d spent my whole life working towards corporate success, but behind all that, who was I? As a person, why would a kid trust or respect me? I was forced to really look at myself, reassess who I was and what made me a person of value on the inside. It was one of the most difficult things I’ve ever experienced, and who would’ve thought it’d be put upon me by a bunch of African preschoolers.