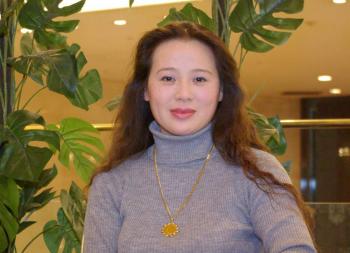 Ms. Ma, graduate of the Chinese Opera Research Institute of Shaanxi Province, China, teaches voice in Japan. She watched the show for the first time and had a hard time containing her joy. (Zhang Qirui / The Epoch Times)
Arts & Culture

Voice Teacher: ‘No words can express that magnificence’

Sunny Chao
View profile
Follow
biggersmaller
Print
OSAKA, Japan—Ms. Ma was utterly surprised and filled with inexpressible joy at finding her idol, singer Guimin Guan, whom she admired more than 10 years ago, among the performers of Divine Performing Arts (DPA).

Ms. Ma, a graduate of the Chinese Opera Research Institute of Shaanxi Province, China, now teaches vocal music in Japan. She brought her children and students to watch the performance of the DPA’s “Chinese New year Spectacular” at the Umeda Arts Theater on Feb. 18.

She said, “What impressed me most in the show was that, as a kid, I listened to Mr. Guan’s singing and particularly admired him. … His voice … is as good as ever, so I'm especially happy.

“I was very moved by the scene, ‘The Miraculous Exhibit.’ When the young man sincerely wanted to practice Falun Gong, a miracle happened. The pain in his arm disappeared. He started to dance. I was particularly moved by that scene, and it made an especially deep impression. And, the gods and Buddhas presented on the backdrop, the magnificent Buddhist world, and the dancing fairies—the whole atmosphere presents an inexpressible but special honor for me—a special magnificence.

“I heard about Falun Gong in China. I am not clear about the specific and profound things in Falun Gong, but when I studied in the Research Institute, many teachers were Falun Gong practitioners. Through today’s programs, I seem to understand Falun Gong better,” she said.

Falun Gong is a traditional cultivation path upholding the principles of truth, compassion, and forbearance. Its practice is currently persecuted in China and thousands face torture daily.

Ms. Ma said with feeling: “I feel proud of the show. It’s great. To say it in an open and aboveboard way, ‘This is our Chinese culture and arts passed on by gods.’ Everyone should come watch the show. All will be moved. The show gave me an inexpressible feeling. It seems no appropriate words can express that kind of magnificence. …

“Many traditional Chinese cultures, which we have forgotten, were represented. DPA represents the 5,000-year-culture passed on by the gods to the audience, reminding us what we had had many, many years ago. The feeling of knowing [gods] long ago deeply touches people. At the same time, the show inspires Chinese people to really understand traditional Chinese culture.

“I think today’s show is particularly successful. I kept crying out, but I could not cry out loudly, since the audience around me was quietly watching the show, others would think I was strange. But it was that kind of feeling— that I couldn’t help it. The show was so great!”

The Epoch Times is a proud sponsor of the Divine Performing Arts 2009 World Tour.
For more information, please see DivinePerformingArts.org