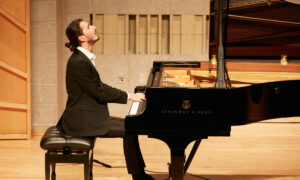 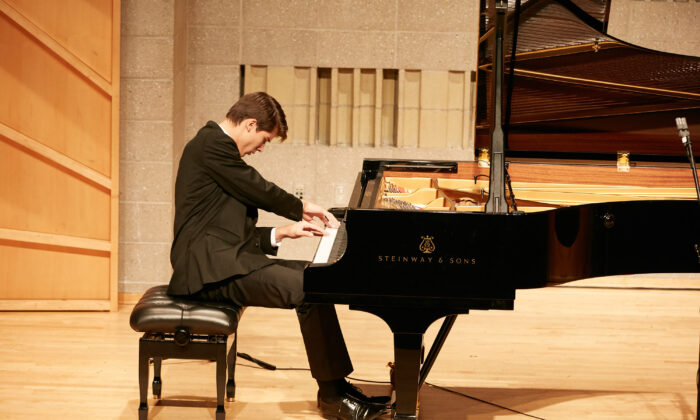 Between the Schumann “Symphonic Etudes” and Liszt’s “Mephisto Valse,” Vladimir Petrov sat at the Steinway piano thinking, what did he get himself into? It was a difficult program he’d picked for the final round, but it paid off.

Petrov won the gold prize at the NTD International Piano Competition on Sept. 28 in New York.

“[During] the break between my pieces, I was thinking, ‘What a difficult program I chose!’ Not only because of the technical skill set a pianist needs, but because this music requires something more than only emotions or imagination,” Petrov said.

“Schumann, and this piece of Liszt’s, is very crazy. By crazy I mean Schumann is always jumping from one idea to another, you need to demonstrate these unexpected characters,” Petrov said. “Mephisto Valse too, it’s very theatrical, very.”

His sensibility, combined with that technical skill set, emotion, and imagination, won the judges over. Petrov had distinguished himself early in the competition, and continued to perform a cut above the rest through each round.

“I didn’t expect this competition will be like this,” Petrov said. After he applied, Petrov learned that the NTD International Piano Competition had a emphasis on tradition, and that NTD Television, the media company hosting the competition, supports various efforts to preserve the traditional Chinese culture that was once almost lost under communist rule.

“I was very impressed,” he said. “I was really touched by this culture.”

The competition itself focuses on repertoire from the Baroque, Classical, and Romantic periods, and there is no music played that is written past 1900, save for a special commissioned work.

“It’s good because that is the most pure music,” Petrov said. “All the music started from there, many centuries ago.”

“It’s been forgotten through the years and in our century totally forgotten,” he said. “[But in some places] they keep their traditions very, very near to their families. I think that’s very important, I feel it’s very close to me.”

The commissioned piece all semi-finalists had to memorize touched on tradition in an unexpected way. It was distinctly Chinese, though it was arranged for piano with classical techniques.

It is titled “Triumph of Goodness,” and while learning it, Petrov developed a story in his mind that he later found was quite similar to the story the piece was based on, as the arranger explained it.

“What I think about this music is that it’s very human, it’s telling about some unfair situations in the country of China, about the persecution of persons by unfair government systems,” he said. “The name is ‘Triumph of Goodness,’ but it starts very, very powerful. There are a lot of angry [moments] in this music. [But] the only way to keep alive, is to keep this goodness alive inside of you. Goodness always wins.”

“I understood this music really well,” he said. “Maybe I will play this in my future concerts.”

Petrov says he has friends who do three or four competitions a year, but he himself rarely competes, so he was nervous all the way through.

“The adrenaline is quite unique—I’m exhausted,” he said.

Despite that, Petrov said he enjoyed the competition because of the people. He said that every competition he has been to is well organized, but here it was perfect.

“The people who work here are working with their heart and we feel it, we feel they are supporting us, everyone, from the first round,” he said.

Petrov is from a family of musicians, his parents a cellist and violinist. “We can form a trio,” he said.

He was born in Russia, and when he was 3, the family moved to Mexico. At age 5 he began playing the piano, and a decade later moved to Russia to study piano. He is currently finishing his master’s degree in Moscow.

For Petrov, music is essential to life, and being a trained musician is to be able to share some very special parts of life with many more people.

“It’s like I know one more language, it’s the language of emotions,” he said. “I think I can speak fluently in that language because people say they understand what I’m saying, what I feel. It’s very interesting in the big world of music, so of course I like to perform.”

He reminded us that when humans sent an introduction out into space, they sent classical music—Bach, Mozart, Beethoven.

“One of the [pieces] was the 5th Symphony of Beethoven. For some UFO that doesn’t speak or will not understand our language, they will maybe understand our music,” Petrov said.

As music is so important, musicians have a responsibility too.

“To be very, very honest with yourself and with the public, and with the musician,” Petrov said. And of course, to honor the composer. “The composer, when he writes music, their emotions are completely infused, completely, and that’s why music gets to our hearts. That’s what I think is most important.”

You can watch the finals here: