Visual Artists and Entrepreneurs ‘Blown Away’ by Shen Yun 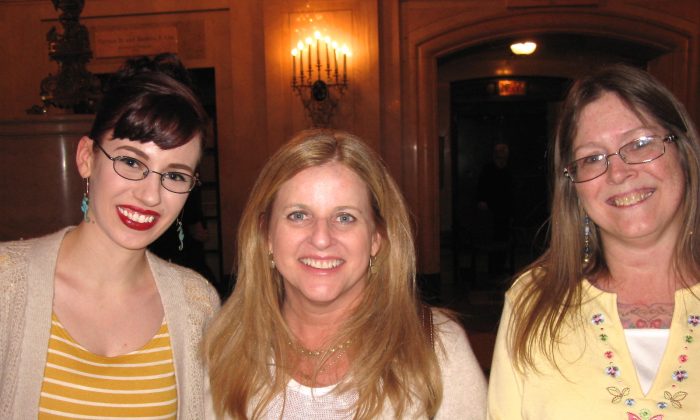 “I’m blown away. The choreography is just phenomenal. The costumes, just the whole flow of it. Beautiful!” said Marie Barron, one of the owners of the Nightingale Arts of Salem store.

“We love it. It’s beautiful. The costumes are wonderful, and it’s just … it’s elegant. Yes. It’s beautiful!” said Anna Chouinard, who works together with Marie Barron. “The dancers are very talented,” added Melissa Chouinard, the third woman in the group.

All three women also produce visual arts, aside from operating the store in Salem, Mass.

Ms. Barron also commented on the rich colors in Shen Yun. “The color combinations and especially the costumes are fantastic. And the backgrounds are really good too. I like the way they mix the screen with the interaction,” she said.

Costumes are an integral part of Shen Yun. They use bright colors to tailor and recreate hundreds of new pieces each season. The hand-made garments span China’s dynasties, regions, and ethnic groups, according to the company’s website.

“Just the way they pop up out of the background, and the next thing you know they’re on the screen, so there’s no break in the flow,” said Anna Chouinard.

Mary Goldberg, a former student at the Royal Academy of Dance in London came to see the same performance with her husband Jeremy.

“I thought it was phenomenal,” Mrs. Goldberg said.

Mr. Goldberg also enjoyed the show. “We thought that the visuals were stimulating. Very colorful and the dancing was fantastic.”