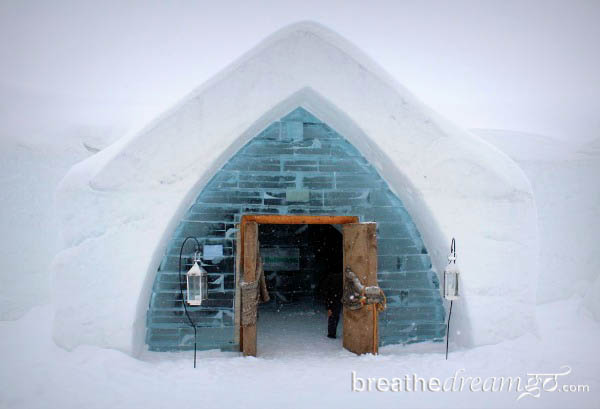 CAN YOU IMAGINE a hotel made completely of ice and snow? No? I couldn’t either. And that’s the reason I wanted to go the Ice Hotel in Quebec, Canada. I wanted to experience it for myself. What I discovered was beyond my imagination. If you are reading this on a sweltering hot, sunny day … come along with me and cool down …

The Ice Hotel — known in French as Hotel de Glace — really is a hotel made almost entirely of ice and snow. But it’s also much more. It’s an inspired meeting of art and nature, a scene of crystallized beauty in a serene Canadian forest, and a portal into Nordic myth.

“Magical is part of our philosophy,” my Ice Hotel guide, Julie Richard, told me.

I went on a perfect weekend in March, when everything in Quebec was carpeted with a thick layer of fresh white snow, and it was not too cold to enjoy being outdoors for a couple of hours (if you are suitably dressed in a parka and lined boots).

The Ice Hotel is only open in the cold winter months. It is created from largely man-made snow in a real Canadian forest near Quebec City, the capital of the province of Quebec. This province is known for being historical, French and, in winter, cold. The cold keeps the hotel from melting from January until March, and also provides a picturesque snow scene setting. However, you don’t have to actually get cold to experience the beauty and magic of the ice hotel.

A castle, cafes and croissants

Here’s what I did and what I recommend that you do, too, to enjoy a magnificent weekend experiencing the beauty of Canada in comfort and luxury. I took the VIA Rail train from Toronto to Quebec City. It’s about a nine-hour train ride, with a short stopover in Montreal (just long enough to buy some of their famous bagels).

But this is not like a nine-hour train journey in other countries. VIA Rail trains are the ultimate in comfort, and business class is truly luxurious. Thickly padded seats, ample leg room, free WiFi and non-stop service from attentive and friendly staff regrettably shortened the journey. Snacks, full-course lunches and dinners, tea, coffee, drinks … it virtually never stops rolling down the centre aisle. You just have to sit back and watch the Canadian landscape flow past through huge picture windows.

When I arrived in Quebec City, it was a five-minute taxi ride from the train station to the 100-year-old Fairmont Chateau Frontenac. This hotel is one of the most magnificent in Canada, inspired by the medieval castles and regal chateaus of Europe and ideally located on a bluff overlooking the mighty St. Lawrence River and Vieux-Quebec (Old Quebec). From here, you can easily walk to many fine restaurants, bakeries and cafes offering French pastries, chic shops selling fashion and art and areas of historical interest.

Quebec City in winter is a wonderland. The old city is a UNESCO World Heritage Site, North America’s oldest settlement and the only fortified city north of Mexico. The upper and lower towns are a warren of narrow streets and old stone buildings, some dating back to the 17th century and all beautifully preserved and housing cafes, galleries, fine restaurants and shops. A fine silting of snow is like a garnish on the European atmosphere.