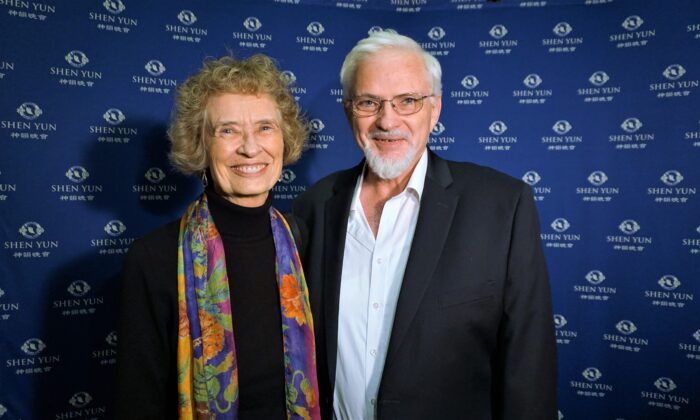 FAIRFAX, Va.—Solace and beauty are rare commodities in today’s world, but theatergoers Harry Reese and Sharon Kavanagh found a source brimming with both when they attended Shen Yun Performing Arts, a fact that they’re grateful for.

“[Shen Yun] is very uplifting and there are so many things to worry about in the world these days, but this makes it all go away, for now. It’s very, relieves stress and it’s, it is very meditative in a way,” Kavangah said, while Reese agreed. The couple took in New York-based Shen Yun on March 10, 2020, at the George Mason University Center for the Arts in Fairfax, Virginia.

“I love all the colors, and the dancing, and the singing,” continued Kavanagh, who owned an IT company before retiring. “The soprano was amazing. And also the music because we are [sitting] so close to the instruments, and that’s wonderful.”

“It’s great. I love the music,” added Reese, who is a contractor for the United States government, “and I mean, of course, the dancing is amazing. But, we’re sitting very close to the orchestra—love the musical part as well.”

In its mission to revive China’s 5,000 years of traditional culture, Shen Yun sends a live orchestra to accompany each of its seven touring groups around the world. Shen Yun utilizes classical Chinese dance, a highly-expressive art form developed over millennia in China’s palaces, to tell legends and stories on stage. One of those legends is about the Creator and the ancient Chinese belief that He interacts with humankind, rewarding good people.

An acknowledgement of the Creator appears in Shen Yun’s song lyrics as well, sung by solo vocal performers in the ancient bel canto style. Reese felt these lyrics and the music overall “makes you think about yourself and … music can make you feel better, you know.”

“But this, from [the] very start, I thought this was fantastic music. I’m very much into [the] musical part. And the dancers are great. The colors—I forgot—the costumes are amazing, too,” he said.

The Creator’s appearance in Shen Yun’s storytelling dances, in addition to the lyrics, also resonated with the couple.

“The higher being, you know, the coming down from the heavens and things that, I thought that was pretty good,” Reese said. “And just all the people, you know, just kind of lookup and say, ‘Oh, this is great. They’re coming down to help.’ I can relate to that, yes.”

“The feeling of a higher being and the self,” is part of the deeper message Reese received from the performance. “You know, individual person or people always look up to the higher being and hope for or pray for, you know, salvation or help in whatever. In fact, we could use some help now, these days.”

“Yes,” Kavanagh chimed in. “And the goodness that is within humanity, if we just bring it forth and concentrate on that aspect.”

Shen Yun’s meditative effect and beauty left a lasting impression on the couple, who described what they would take home from the experience: “To have a lot of hope and to—unity within the world and kindness to other people,” Kavanagh said.

Reese was of the same mind. “And, the beauty—the beauty of the whole performance is, it’s all wrapped up in, you know, music and dance and the outfits and the colors are just great. And how do they do their hair so quickly, I don’t understand. … their hair, it’s different every time they come out”

“But no,” he said, “I will remember the beauty of [Shen Yun] for quite some.”