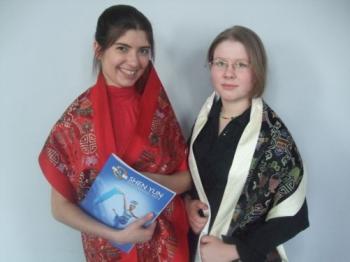 Violinist Hopes to Play the Erhu

LODZ, Poland—The New-York based Shen Yun Performing Arts Company performed before a packed theater at the Teatr Wielki W. Lodzi. Among them were Ms. Chadzynska, a violin teacher, and her younger sister Ms. Chadzynska.  The two applauded throughout the show.

They especially applauded for Dance of the Yi, Dragon Springs Drummers,  Tenor Hong Ming singing "Rest in Knowing," and the scenes that told of modern day courage, Dignity and Compassion and Knowing the True Picture Offers Ultimate Hope.

Ms. Chadzynska wished it had lasted longer than two-and half hours and was a little sorry when the final curtain fell and the show was over. She said that she was emotionally touched by the show.

Like other audience members, she was surprised by the powerful emotion conveyed by the two-stringed Chinese erhu, an ancient Chinese instrument.

'I was impressed with the dances, and because I am a violinist liked very much the two string instrument," she shared.

Ms. Chadzynska regretted that she couldn't see the shape of the erhu very well, but this did not detract from the music she heard.

"I can not speak about this [the appearance of the] instrument.  I was sitting very far back on the balcony, and I didn't see the instrument clearly. It had a very interesting shape. It looked like a trunk with a pole. I was with my younger sister who is a pianist and she saw only such a trunk and very interesting sound," she explained.

But, she wished to have the chance to play that instrument, "Yes, yes, yes."

Both sisters wore Chinese clothes in honor of the show, a way to show respect to the artists in Europe.

"Yes, these are clothes from China. Our father bought them from a journey. And here is my younger sister who plays the piano."

The younger Ms. Chadzynska said that she attends "a music school."

"The clothes—we liked the dresses in three colors very much.  I think that was the most beautiful."

Mr. Siedlecky, owner of a company, joined  the conversation.

He said, “The show is really amazing. I must admit that once I had tears in my eyes, it was very touching, especially the songs with Polish text universal for all to read. That is waiting for us all, because a new era is coming, the era of human renewal. I think that this spectacular performance has come at the right time.”

Mr. Siedlecki is “very interested in spiritual development.” He has read about Falun Dafa, and says, "I frown that this movement was banned in China, because it was a spiritual awakening.”

SOH, a media partner of The Epoch Times, contributed to this article.