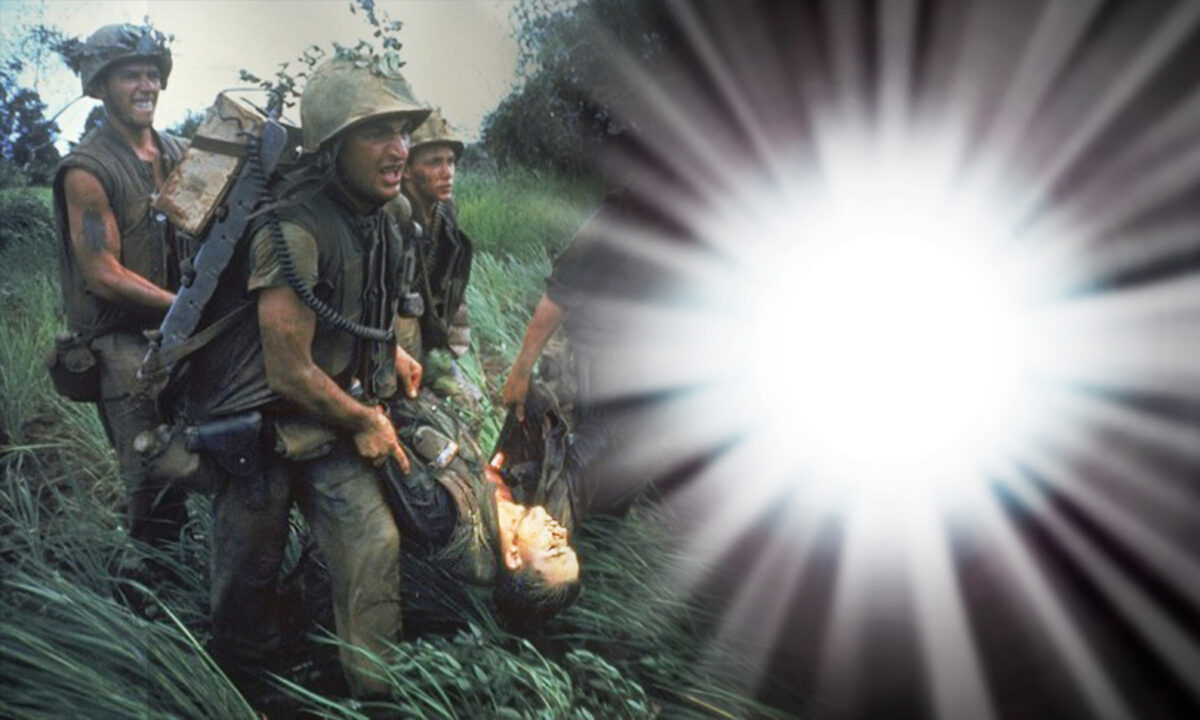 Bill Vandenbush joined the U.S. Army in 1968. When he got to Vietnam, the war zone wasn’t what he expected.

“It was much more frightening than I ever imagined,” he said during a talk he gave to a prison audience, which was videotaped and shared on YouTube by NDE Accounts.

He spent 10 months in combat as an infantry soldier. Fire fights and big battles were a common experience for him, as were watching both his friends and the enemy die.

He made a pact with two friends, John and Hank. The trio would protect each other and cover each other’s backs. “I learned that three or four or five people are much stronger than an individual,” he said.

But John and Hank weren’t on the same mission with him when he almost died.

The mission came up unexpectedly; it was to find a downed helicopter. Suddenly, fire was coming at him and his men from all sides. After some time, an American air strike came to drive back the enemy.

But when Vanderbush saw the planes dropping the bombs, he knew they were too close to where he and his men were located. Sure enough, a bomb dropped and shrapnel flew at him.

He was 19 years old and he thought he was going to die.

“The next thing I know, everything was peaceful and calm,” he recalled. “There was no more war.”

Then he traveled through a dark tunnel into a light, he felt everything was wonderful, which he described as “a joy like I’ve never felt before in my life.”

His grandfather, who had died five years earlier, there welcomed him. Then another spirit came and told him he had to go back; he still had a purpose to fulfill on Earth.

He was back on the battlefield. “I could smell the war, I could smell the gunpowder,” he said. But he wasn’t in pain, and he felt no more fear. He knew that no matter what happened, he would live.

“I had no worries about death or dying or the consequences of the injuries I had sustained,” he said.

He had been seriously injured in the explosion. Then an enemy soldier appeared and did more damage, shooting him several times. Vandenbush said he felt the bullets enter his body, but he wasn’t concerned. He felt that all was well.

When the medics got him to a field hospital, they assumed he would die and left him on a gurney in the hallway. Eventually, a nurse saw he was still alive, so they did what they could for him and sent him to a bigger hospital.

“My face was crushed in, I had a head injury, my throat was ripped out, my chest was ripped open … my left arm was torn almost completely off,” he said. “I knew that I had a long road ahead of me.”

He still felt connected to the spirit world he had glimpsed, and it comforted him and gave him strength.

It took him several months to get home to a hospital in California. The years that followed weren’t always easy. It took him time to learn to speak again after his injuries. He felt a longing to reconnect with the spirit that had spoken to him and to fulfill a greater purpose than his daily life was accomplishing.

In 1989, he spoke about his near-death experience for the first time. He was taking a college course that taught about confronting death and he opened up as part of a class assignment.

With the encouragement of his professor, he connected with other near-death experiencers and began to share his experience far and wide. In speaking about this, he revived that sense of peace he had felt, as though his longing to achieve a purpose was fulfilled. That purpose was to share peace and happiness with others, to help heal them.

He realized that, “a warrior is someone who wages peace,” he said, adding that a warrior knows how to defend himself and others, but his ultimate aim is to find peace and bring it to others.

Vandenbush recounted his miraculous experience in his book “If Morning Never Comes: A Soldier’s Near-Death Experience on the Battlefield” published by White Crow Books.