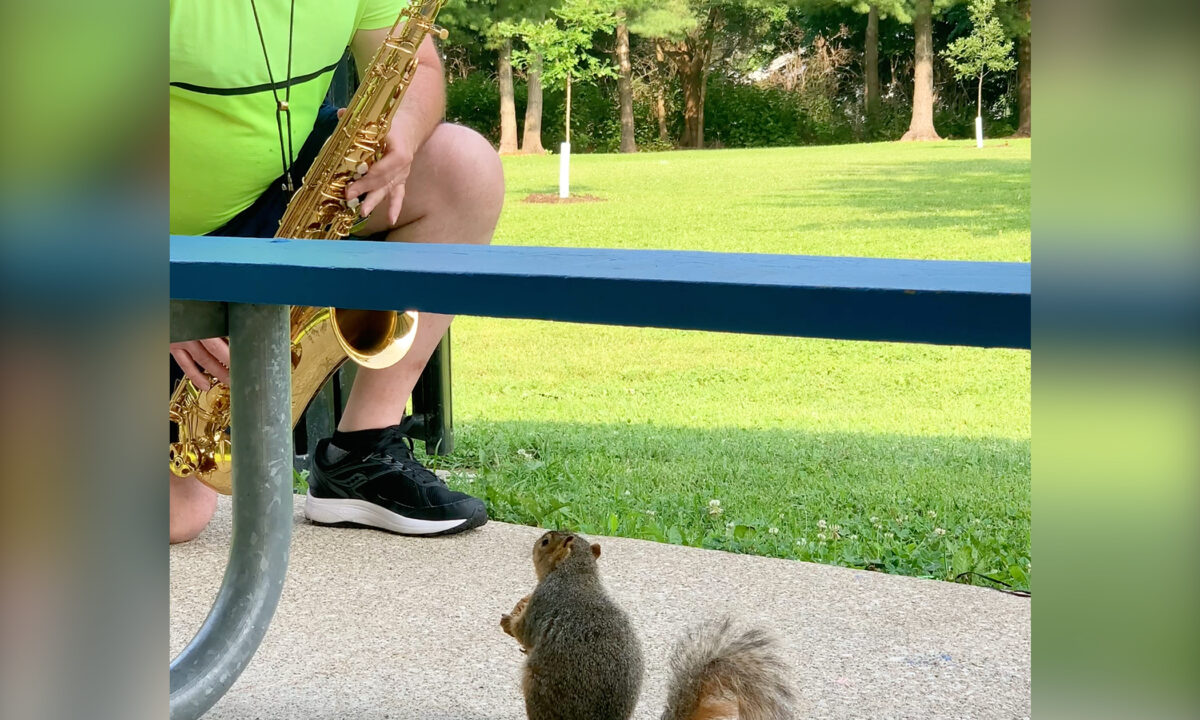 Video: Squirrel Enjoys Listening to a Professor of Music Practice His Saxophone at a Park

A heartwarming video of a squirrel watching attentively as a professor of music at Oklahoma Christian University practices his saxophone at a park has tugged at netizens’ heartstrings.

“He acted like a little person and really seemed like he liked the music I was playing,” Heath Jones, 51, told The Epoch Times via email.

An active professional performer in the Oklahoma City area, Jones enjoys playing the saxophone and watching his son bowl.

When Jones was on a 30-day bowling tour with his son in Indianapolis, he found himself unable to practice at the hotel. Thus he took his saxophone to Garfield Park and began practicing there. Jones then noticed that a curious squirrel would come up and sit by his side while he played his notes.

“He would tap me on the foot while I was practicing so I figured that he wanted some food. I fed him a Cliff bar and we became friends,” Jones said of the squirrel.

Seeing the squirrel watch him practice with his mesmerizing eyes would brighten up Jones’s days. He then decided to capture this on video, adding, “no one would believe that there was a squirrel that enjoyed jazz.”

In July, Jones shared the adorable 16-second video on Facebook, in which he’s seen kneeling down and playing his saxophone, with his squirrel “fan” enjoying his performance.

“​​I’m so obsessed with this I watch it once a day to keep my spirits up,” one of them wrote.

“He is so interested,” a second user chimed in. “I’ve watched quite a few videos today and this is by far my favorite.”

Meanwhile, Jones told The Epoch Times that he is surprised by the overwhelming reaction that he has received.

“Sixteen seconds can really make a big difference in someone’s day,” he said.

Jones hasn’t met the squirrel since, but says that he hopes to go back to Garfield Park someday to see if the squirrel would come back to the picnic table.