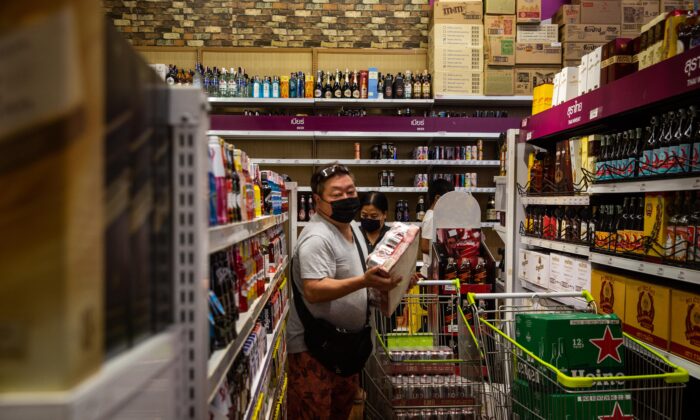 A new video shows how a single cough can spread the CCP virus into an adjoining aisle in a grocery store.

The CCP (Chinese Communist Party) virus, commonly known as novel coronavirus, causes the COVID-19 disease, which can cause severe illness and even death in some patients.

Researchers in Finland said preliminary results from exploring the transport and spread of the virus through the air indicate particles carrying the virus can remain in the air longer than originally thought.

They released a video showing a person in a grocery store aisle coughing. Aerosol particles—produced from the respiratory tract when coughing, sneezing, or even talking—form a cloud that reaches a person in the next aisle over.

The cloud takes up to several minutes to disperse, researchers said, citing results from three different groups that carried out the modeling separately.

“Someone infected by the coronavirus, can cough and walk away, but then leave behind extremely small aerosol particles carrying the coronavirus. These particles could then end up in the respiratory tract of others in the vicinity,” Ville Vuorinen, an assistant professor at Aalto University, said in a statement.

The modelers used movement of aerosol particles smaller than 20 micrometers. Particles of a small size don’t sink to the floor but move along in air currents or remain floating in place.

Jussi Sane, chief specialist at the Finnish Institute for Health and Welfare, said the preliminary results will not lead immediately to new recommendations aimed at curtailing the spread of the CCP virus. The results do highlight the importance of the current recommendations, which include people largely staying at home and avoiding public places.

“These results are an important part of the whole, and they should be compared with the data from real-life epidemic studies,” she said.

They’re not conclusive but “are consistent with aerosolization of virus from normal breathing,” Harvey Fineberg, who heads a standing committee on Emerging Infectious Diseases and 21st Century Health Threats, wrote in a letter last week.

One study published in the New England Journal of Medicine found SARS-CoV-2, the new virus, remained viable in aerosols for three hours, the duration of the experiment. Another, from researchers in China, found little evidence of the virus in samples taken from various places in hospitals, but did find the virus in particles in bathrooms. And researchers examining disease spread at a hospital in Nebraska said they found indications the virus is spread through airborne transmission along with direct transmission.

Aerosol scientists at the University of California, Davis, said recently that even normal speech from people who aren’t showing symptoms but are infected with the CCP virus may produce enough aerosolized particles to transmit the infection.

“Asymptomatic and pre-symptomatic individuals, by definition, do not cough or sneeze to any appreciable extent. This leaves direct or indirect contact modes and aerosol transmission as the main possible modes of transmission,” they wrote in a recent op-ed.

They called for additional specific studies looking at aerosol transmission.