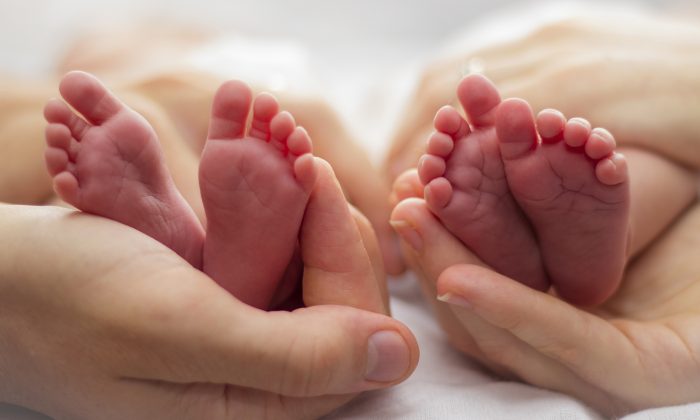 A video of Southern Californian newborn twins has gone viral because they appeared to hold hands straight after birth.

Murrieta nutritionist Celi attracted the attention of millions of social media users after a handheld video circulated of her after giving birth to her twin daughters on June 5, 2018. On Unilad’s Facebook page the video has been played more than 3.2 million times, liked 90,000 times, and shared 20,000 times.

The footage showed the avid Instagram user and army officer resting in hospital with family when something unexpected happened.

“There we go, better?” a nurse can be heard saying to the babies on the video. “Oh look at them hold hands, oh gosh.”

The video zooms in to show the twins really are reaching out to each and clasping each other’s tiny hand.

The nurse continues to marvel at the rare sight.

“Oh my gosh that is so precious,” she says. “Oh my god, oh my god, you guys are going to make me cry. How cute is that?”

Others can be heard expressing their amazement at the twins holding hands so soon after being born, as if it were human instinct.

A man, who appears to be the father, jokes the twins came as no surprise.

“We ordered two,” he can be heard saying off camera.

Celi was very pleased with the outcome of what she described to be a “crazy” delivery process.

“Everything turned out great, babies came out healthy,” she said on Instagram. “Sister reaching over for her sister’s hand.”

The mother said she kept her cool throughout the entire process and felt no severe pain.

“I believe everything happens for a reason and everything just fell into place,” she said. “Even though this wasn’t my original birth plan, I am thankful for how things turned out.”

Celi revealed she was in labor for up to five hours and was only admitted to hospital after her doctor recommended it at about 4 p.m. local time.

“Per doctor I am being admitted into the hospital since I am already dilated and my water could break at any second,” she said. “The doctor had felt one of the baby’s feet during my exam, I wasn’t allowed to go home or to get anything else or eat/drink anything from this point on.”

Celi relied on her parents and nurse to answer all of her questions about the birth process. She finally met with the doctors and other health professionals who would deliver the babies at 8 p.m.

One hour later the babies had entered the world.

The sisters have since grown to become toddlers and the mother posted several photos to her social media page.