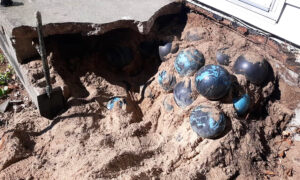 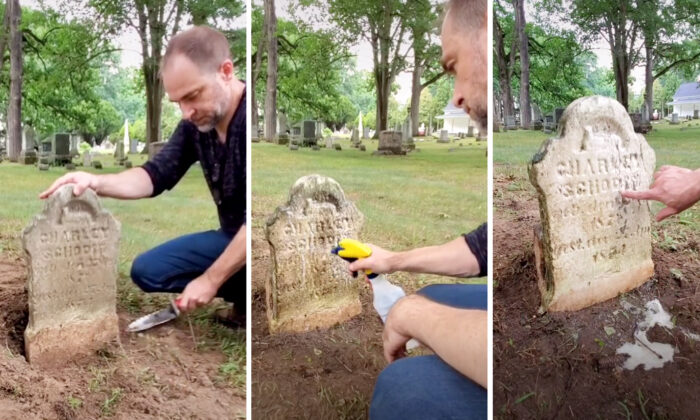 One Michigan man has been spending his spare time caring for the once-quick, long-passed residents of a local graveyard.

Driven by a love for history and great respect for his predecessors who built his country, manufacturing engineer Vince Nestico, 49, recently started refreshing aged and neglected gravestones.

He was thusly inspired by a friend who has been restoring headstones for a few years, and started learning and practicing the process last year before striking out on his own.

“I don’t go in with a specific grave in mind. I let nature draw me to where I’m needed,” he told The Epoch Times, adding that he tries to visit local cemeteries once or twice a week. There are so many unkept graves in disrepair and need of freshening up.

“Using clean water and a professional grade biological cleaner, I remove the lichens and soil from the stone with gentle brushes,” he explains. “This cleaner is also approved for use on historical monuments by the U.S. Government.”

Eventually, Vince started video-recording his dramatic tombstone transformations: foundations are restored; tipped headstones righted; dirt and crud loosened with brushes and then washed away; and bright marble underneath is restored.

He posted the videos on TikTok, garnering millions of views, with people responding with mainly “respect and an appreciation.”

Vince says he doesn’t know whose grave he is cleaning when he begins, but afterwards he makes a point of learning their history. He finds information about them on different online genealogy sites and researches records from his local museum—where he volunteers as curator. Each video shows respect to the person whose tombstone it is, revealing their name, when they lived, and sometimes their photograph.

“Every person has a story, whether it be tragedy, triumph, or anything in between,” Vince said. “With most that I work on being well over 100 years old, the descendants may not even be aware that these graves exist.”

He mentioned that he recently cleaned a “very soiled monument,” which was the resting place of a famous lighthouse builder from the mid-1800s, whose “history had been long forgotten until now.”

Vince said: “I have learned to respect the foundations our ancestors have built over centuries. Despite so many obstacles, they have paved the way to help progress society.

“Each of us only have a short time in this world,” he adds. “I feel it is our responsibility to use our time to build upon that foundation and make a greater one for our future descendants.”