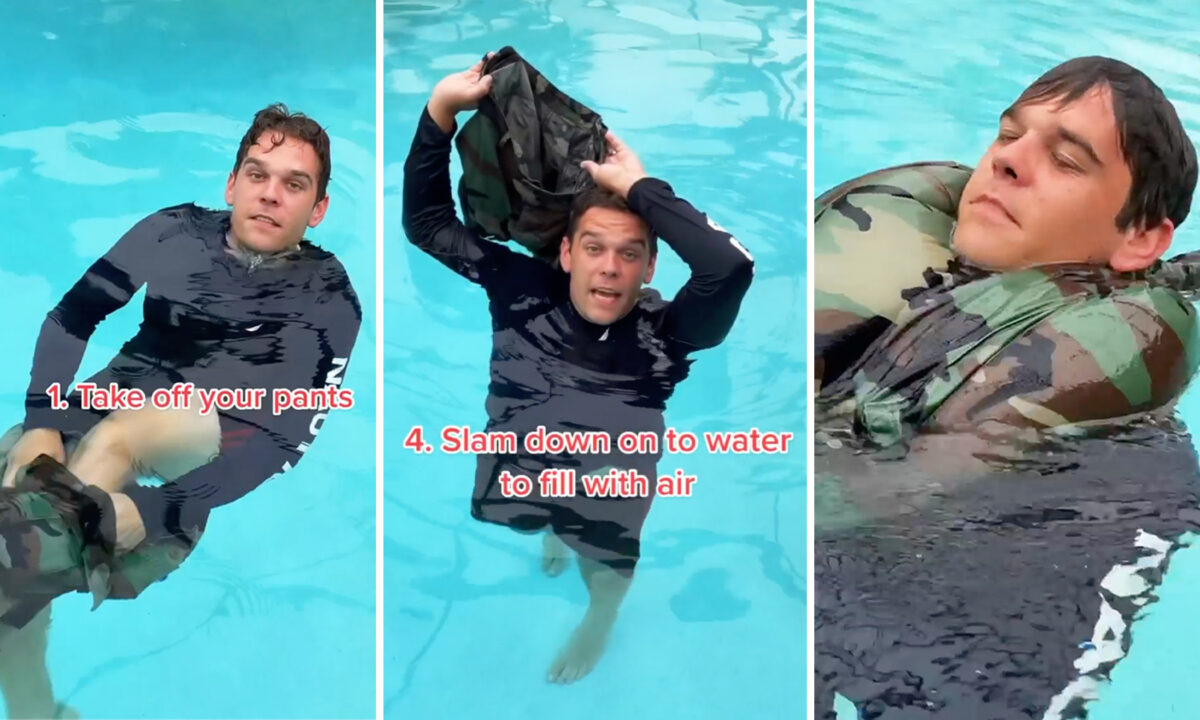 Anyone who’s ventured out across the vast, deep-blue sea—on a cruise liner perhaps—has probably entertained what falling in would be like. Our minds conjure visions of “Jaws” lurking, unseen in the black depths, beneath our dangling feet.

But what would you do in that situation, really?

One former Royal Marine of the Netherlands has a few survival tips up his sleeves—his pant legs actually—for us in just such a scenario.

Dutchman “Robin H,” now living in the United States, has trained in all sorts of survival skills during his stint in the Royal Marines. Now, he demonstrates those ingenious survivalist hacks in lively videos on TikTok, where he’s also gone hugely viral.

As for staying afloat lost at sea, Robin teaches how to create a flotation device out of some unlikely materials: your pants.

In a video, he demonstrates in a swimming pool, saying, “Your clothing has natural air in it, right? If you ever fall in the water, you’re going to take your pants …” Taking a deep breath, he removes his camouflage pants (wearing swim trunks underneath, of course).

“You want to try to remain as calm as possible,” he adds. “Now, all you have to do, I’m gonna put this one on my shoulder and let some of the water out.”

Next, he says, “Slam down your pants as hard as you can to fill it up with air.”

Grasping the pant waist with both hands, Robin swings the open end high, slamming it down into the water, capturing a bubble of air within the legs.

Then, squeezing the waistline closed with his hands, he reveals the final product: a perfect, khaki-colored life preserver. He sticks his head in between the now-bobbing leggings, curls up into the rescue position—and floats.

That video garnered an astounding 12.5 million views alone, while Robin’s TikTok channel, Dutchintheusa, has amassed some 3.6 million followers. His other videos feature escape and self-defense techniques, and other survival hacks.

As for pant-leg life preservers … in warm waters? Maybe. Would removing your pants in frigid waters be your first choice? Hopefully, you won’t ever have to find out!