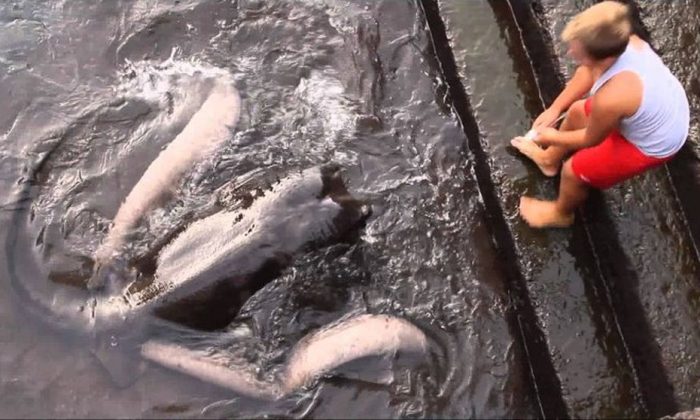 (For starters, it’s probably not a very good idea as stingrays are now to attack people):

A child is seen in the video playing with a stingray in Vueltas, located in Valle Gran Rey, Spain.

This large stingray’s barbed stinger can easily be seen.

While they don’t aggressively attack humans, if it’s stepped on, the sea ray could use its stinger. Steve Irwin, the star of the “Crocodile Hunter TV” show, was infamously fatally stung in the heart by a stingray in 2006.

The boy is seen approaching the ray from behind before showing the birth process.

According to National Geographic, “female stingrays give birth once a year. They usually have two to six young at a time.”

In a recent incident in February 2019, a ray slashed a surfer in New Zealand.

A local surfer Colin McGonagle saw the injured man and assisted him.

A stingray encounter left an Italian tourist with an ugly gash in his lower leg.

“He was in shock and kept saying how painful the laceration was,” McGonagle said, Stuff.co.nz reported.

“I understand that the barb has toxins that if not treated quickly, can progress into the blood system,” he said of the injury.

In January, a New Zealand teen was attacked by a stingray while bodyboarding on the beach, News.com.au reported. The website posted graphic images of the wound.

The young woman felt “waves of pain” after she was stung.

Officials told the news website that it wasn’t caused by a shark bite but likely a stingray.