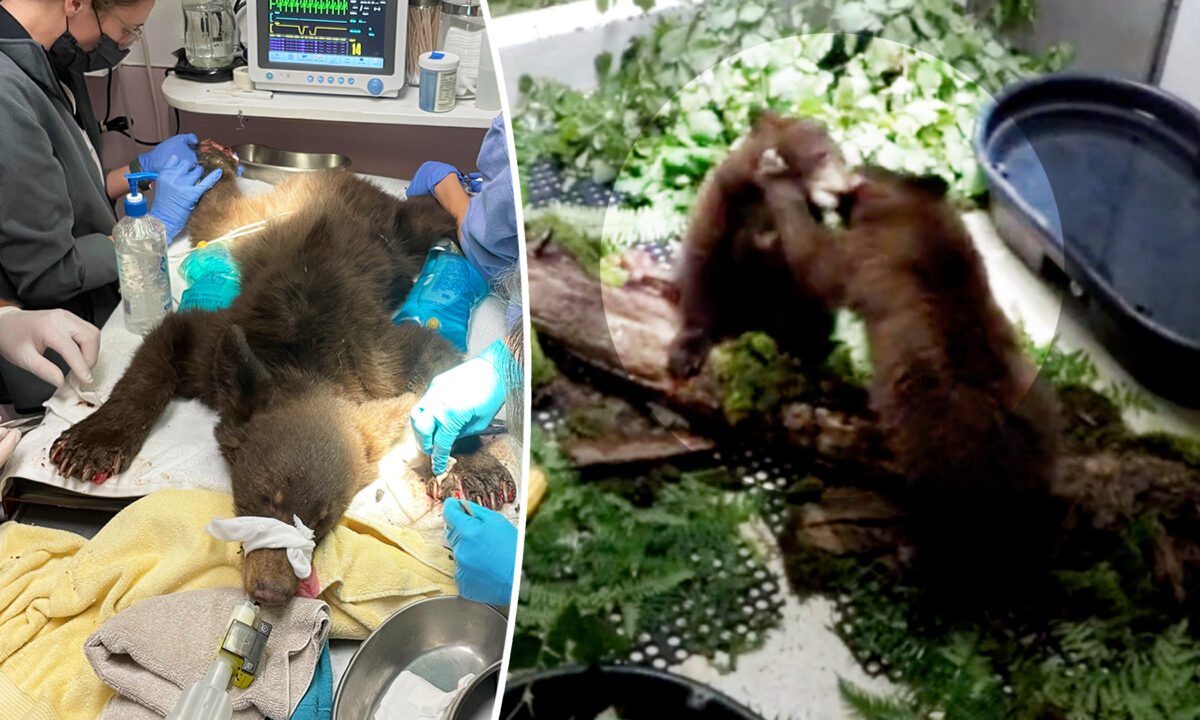 A pair of baby black bear siblings were reunited after being separated from their mother and surviving the Twenty-Five Mile Wildfire, which raged through the state park in Washington over the summer.

Chelan County locals Dave and Karen Case, who live on a remote 50-acre property surrounded by state forest land, first witnessed the pair, along with their mother, on the property’s wildlife camera. The young cubs could be seen wrestling about playfully—then the fire descended upon them quicker than the animals could move.

“That’s how we came to see the wounded bear cubs,” Karen told PAWS Wildlife Center. “One of them was crawling and unable to walk.”

The footage shows one cub crawling on its elbows, its paws badly injured by the fire. The couple reached out to Washington Department of Fish and Wildlife, who set out to rescue the bears.

“They spent hours running up and down in the hillside looking for the bears in heat and smoke,” said Karen.

The cubs on Aug. 23 were brought to PAWS Wildlife Center in Lynnwood where they underwent treatment for severe burns to their legs and feet. PAWS veterinarian Dr. Nicki Rosenhagen said at the time it was very unlikely they would survive.

“When both of the cubs came in, all four feet had second- and third-degree burns,” Rosenhagen said in a video produced by The Dodo. “They are very stoic and they are very tough. That doesn’t mean that they’re not in pain. It just means that their often not showing it to us.”

Staff cleaned the bears’ burned paws, controlled the pain and inflammation, and then kept then in separate enclosures in the beginning—with the intention of eventually reuniting the pair once they recovered from their trauma.

Play is an important part of cubs’ learning bear behavior, PAWS said. Hopefully, they would remember each other.

When that momentous time finally came in November, it was caught on video. Now much bigger, the cubs are seen greeting each other, coming nose to nose for the first time in months and playfully wrestling in the adorable footage.

“This is their version of hugging,” Rosenhagen is heard saying of the bears’ rowdy behavior. Both Karen and Dave were privy to the live screening of the reunion. The pair couldn’t stop hugging afterward, PAWS staff added.

Both bears are set to be released back into the wild in the spring.