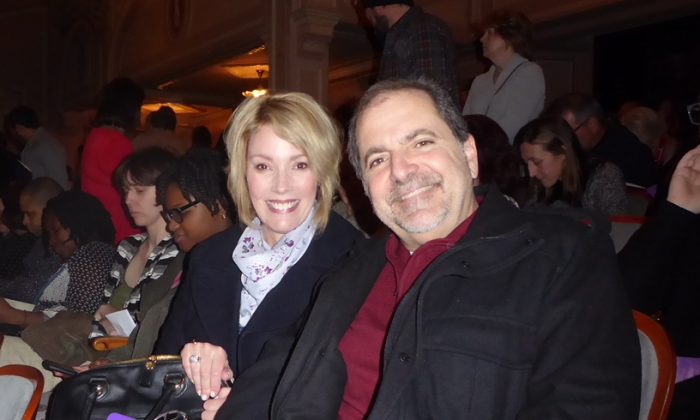 PHILADELPHIA—The New York-based Shen Yun Performing Arts was started with the mission to revive China’s 5,000 years of semi-divine culture. It expanded from one to now six equal-sized companies that travel across four continents to perform in hundreds of sold-out shows across the globe.

These performances have inspired countless audiences, with people saying that they have opened their eyes to a different China. This was the case for Janet Schneider and her husband Michael Schneider, who experienced Shen Yun at the Merriam Theater during the matinee on Feb. 16.

Michael bought tickets to the traditional dance and music production to celebrate Valentine’s Day with Janet, something that she appreciated very much.

“I like all of the stories. They are beautifully told and it’s beautifully performed. And I am learning a lot about the ballet, about the performance of Shen Yun,” said Janet, who is a vice president of sales and marketing for a medical service company in Pennsylvania.

She thought it was wonderful that Americans are given the opportunity to experience a lost culture through Shen Yun’s performance.

“I think it’s wonderful that you are doing this here in the United States because I have learned so much. I didn’t realize all of this. I knew some history, but I didn’t know all of this history that is being shared so I think it is an educational piece. I was thinking, I see a lot of young people here and I think it so beneficial,” Janet said.

Shen Yun displays the inner spiritual core of China’s culture, which encompasses the virtues of benevolence, kindness, and honor. The dances draw upon the vast history of China’s 5,000-year-old civilization. The performance depicts deep themes from Chinese culture that are rooted in Confucianism, Buddhism, Taoism, and the ancient people’s reverence for the divine.

China itself was once known as Shen Zhou, or the Divine Land. These terms are used to describe a belief that China used to be a land where deities and mortals coexisted and a belief that the divine transmitted a rich culture to the people of the earth, according to the Shen Yun website.

It is these traditions that Janet thinks is important to keep alive in our modern world.

“It really is an educational experience,” she said.

Meanwhile, her husband said he appreciated the artistry of the dancers and enjoys the overall aspect of the performance.

“The artistry, the color, the costumes,” Michael said. “The music is beautiful.”

Janet said she looks forward to seeing the performance again next year.

“They said, every year is a different performance. So, I am looking forward to seeing what next year’s is all about,” she said.

With reporting by Frank Liang.