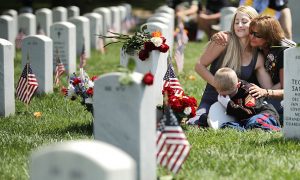 On Memorial Day, a Remembrance of the Fallen
0
Share Now
FacebookTweetParlerEmail
Copy Link 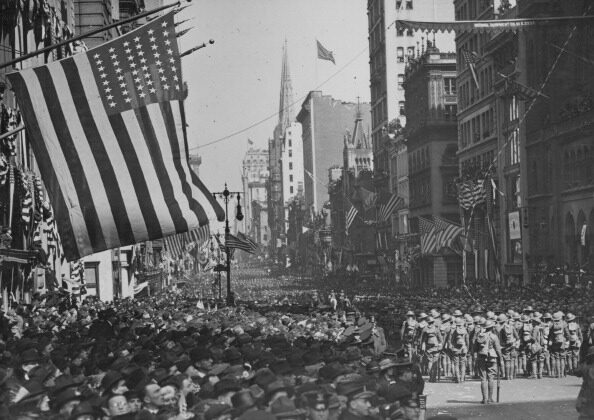 Veterans Day: A Time for Remembrance and Gratitude

On the 11th hour of the 11th day of the 11th month of 1918, the Great War came to an end. Though historians are still quarreling over the figures, the “war to end all wars” had killed at least 8 million military personnel and 6.6 million civilians. Less than 30 years later, another and far deadlier war would change the name of the Great War to World War I.

From that November date evolved what we now call Veterans Day. In 1919, President Woodrow Wilson proclaimed November 11 “Armistice Day,” a time to commemorate those who had died in the war and to feel grateful for their victory.

In 1926, Congress passed a resolution making Armistice Day an annual observance, and in 1938 declared it a national holiday in honor of the veterans of the Great War. In one of those ironies of history, the Congress also dedicated Armistice Day to the cause of world peace. A year later, World War II erupted in Europe.

During the administration of President Dwight Eisenhower, the word “Armistice” was changed to “Veterans” to honor all veterans, living and dead. When the Holiday Bill of 1968 moved federal holidays to Mondays to extend a weekend, veterans and others protested this change in regard to Veterans Day, and in 1975 President Gerald Ford restored the day to November 11.

This barebones history describes how Veterans Day was created.

But what does this special day really mean to us?

After a century of murder and violence—the Russian Revolution, the Nazis, the death camps, the seemingly endless wars around the world, the millions murdered during the Chinese Cultural Revolution, the Killing Fields of Cambodia, and more—we moderns have seen enough spilled blood to fill an ocean.

As a result, we forget that our ancestors living in 1913 were much more innocent than we are today. The last half of the 19th century, at least in Europe, saw few conflicts other than the Franco-Prussian War of 1870. Europeans and Americans of that day simply lacked the imagination and experience to foresee a war in which millions would die, battles in which thousands would pay with their lives for a few yards of ground, and the terrible carnage that machine guns, mustard gas, and heavy artillery would bring to those battlefields.

Unless we have read biographies like “Goodbye to All That” by Robert Graves or histories like Paul Fussell’s “The Great War and Modern Memory,” we may also lack the ability to understand what the soldiers of that war endured. Most of the war on the Western Front, for example, was static, with soldiers embedded in trenches, living in muck and excrement, rain and snow, plagued by fleas and rats, and always suffering under the strain of possible attack or bombardment.

It is for all these reasons that Armistice Day came into being.

Like the United States, different countries involved in the First World War established November 11 as a day to remember the dead of that war.

In the Commonwealth Nations of Great Britain, Remembrance Day remains a time to recollect those veterans who have lost their lives in the service of their respective countries. In the United Kingdom, for example, there are wreath-laying ceremonies, the military marks the occasion with appearances by troops, and a two-minute silence at 11:00 a.m. still prevails in many places as a sign of respect for the dead.

Here from a Forces War Records post is a description of that first silence in Manchester, 1919:

“The first stroke of eleven produced a magical effect.

“The tram cars glided into stillness, motors ceased to cough and fume, and stopped dead, and the mighty-limbed dray horses hunched back upon their loads and stopped also, seeming to do it of their own volition.

“Someone took off his hat, and with a nervous hesitancy the rest of the men bowed their heads also. Here and there an old soldier could be detected slipping unconsciously into the posture of ‘attention.’ An elderly woman, not far away, wiped her eyes, and the man beside her looked white and stern. Everyone stood very still … The hush deepened. It had spread over the whole city and become so pronounced as to impress one with a sense of audibility. It was a silence which was almost pain … And the spirit of memory brooded over it all.”

Because of the poem “In Flanders Fields,” with its famous opening lines “In Flanders Fields the poppies grow/ Between the crosses row on row,” the poppy became the symbol of Remembrance Day and is still worn by many as a token of respect and recollection of the soldiers, sailors, and airmen who have died in Britain’s wars.

The Living and the Dead

Shortly after the Civil War, many American states had established Memorial Day as the time for honoring those who had died for their country. As a result, Veterans Day focuses more on those who have served their country in the military rather than on those who gave their lives in battle.

These men and women are still among us. Some veterans of World War II, millions of other men and women who served in such conflicts as the Korean War and the war in Vietnam, and those who have more recently done their duty in places like Afghanistan and Iraq remain very much a part of the fabric of American life. Veterans Day belongs to them, a time set aside to mark their patriotism and sacrifice, a time for the rest of us to pause and appreciate what they did for their country.

Of course, not all in our military see combat or finds themselves at risk of death or wounds, but we honor them as well for enlisting and for serving their country in capacities ranging from mechanic to military police.

So how do we pay our respects to those who fought for our country?

We can begin by listening to the stories of those who still live who served in our military. Our grandfathers and in some cases, our great-grandfathers, our neighbors who served in Vietnam, our uncles and cousins who fought in distant places like Afghanistan or who served tours in countries like South Korea or Germany—we can ask them about their experiences and thank them for their service. By doing so, we are not only expressing our gratitude but also learning more about the costs of keeping our country free.

We can also educate ourselves about the valiant soldiers, sailors, and airmen who fought to preserve those freedoms. We can read autobiographies by such combatants as Eugene Sledge in his account of the war in the Pacific against the Japanese, “With the Old Breed,” or novels like Anton Myrer’s “Once an Eagle,” which offers a broad account of the American wars of the 20th century. We can watch documentaries and Hollywood movies about these veterans and their wars, and discover the tremendous sacrifices some of them made and the horrible battles in which they fought.

Whether we ourselves served in uniform for our country, we can teach our children the honor of doing so. We can give them heroes from our past—the drummer boy of Shiloh; the buffalo soldiers of the Western plains; Alvin York of Tennessee in World War I; Audie Murphy, the most highly decorated soldier of World War II; generals like Pershing, Dwight Eisenhower, Douglas MacArthur; and so many others in uniform who gave of themselves on battlefields around the world.

We can support a military prepared for conflict. We must never send into battle young men and women who find themselves inferior in training and equipment when facing an enemy. We must give them the tools they need to win and to keep our country safe.

Finally, we can pause on November 11, offer our own two minutes of silence and reflection, and express our gratitude that from our cities, towns, and countryside young patriots continue to believe in this republic and are willing to serve it under arms.

My father, who died two years ago, spent his late teens as an infantryman in the 88th Division in Italy during World War II.

Over the years, Dad shared some stories from that time: the hardships of living in the open air, the afternoon when his platoon leader pushed ahead of him on a stairwell leading into a basement and lost his foot to a German mine, the morning when he and his squad captured a dozen Germans eating breakfast in a farmhouse.

At one Thanksgiving Day gathering, my siblings and I gathered our children, most of them teenagers, around Dad and asked him to tell some of his stories. They listened attentively, asked many questions, and came away knowing a little more about one man’s gift to his country.

All too often, many of us forget the meaning of the federal holiday we are celebrating. Memorial Day, for example, means picnics and NASCAR races, Labor Day is a mini-vacation before the onset of fall and winter, and Presidents Day brings retail bargains and sales.

This year, Veterans Day falls on a Wednesday. Let’s pause on that day to pay some sort of homage to our veterans who have protected our republic and our freedom.

Thank you, Dad, and all of you who have served our country.