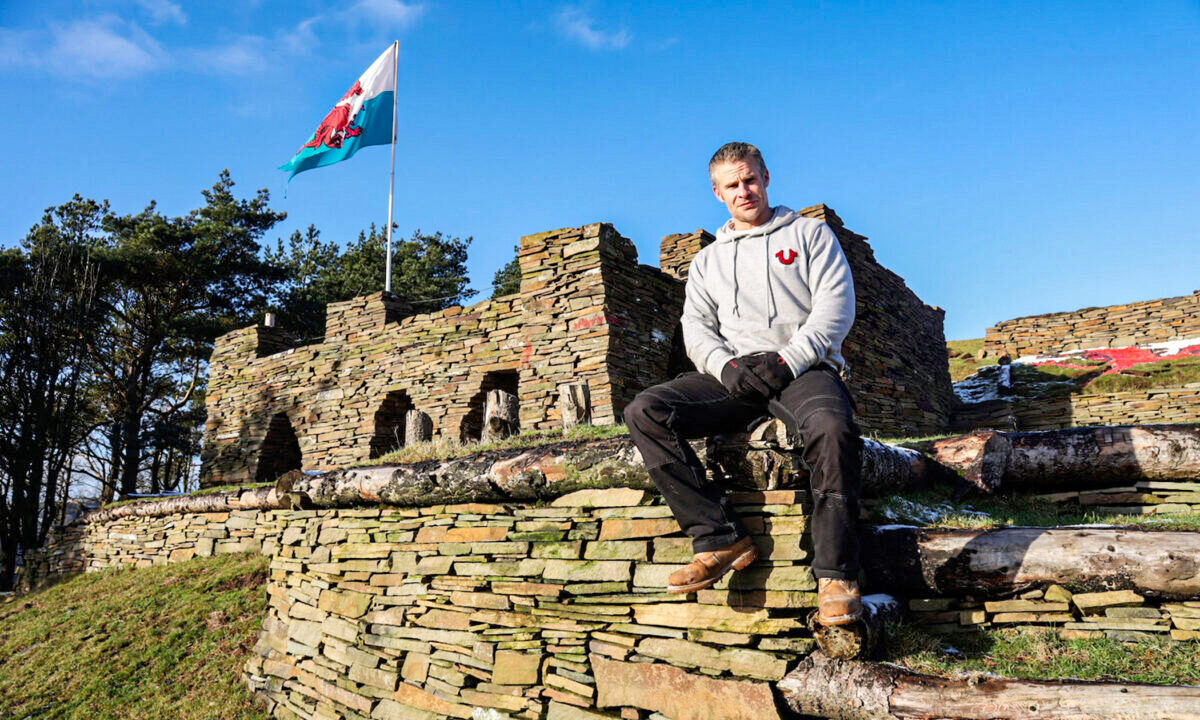 An ex-soldier battling PTSD has built a castle on a mountainside where he used to sleep rough to help veterans battle their inner demons.

Mikey Allen, 41, says his therapy fort is now busier than ever as military personnel struggle with mental issues because of the pandemic.

The ex-lance corporal was diagnosed with PTSD (Post Traumatic Stress Disorder) after watching his friends get killed by bombs in Afghanistan.

“I came back a different person,” said Mikey, who stayed in Afghanistan for 7 months. “I suffered with flashbacks, self-destructive tendencies, depression, homelessness, poverty, suicidal thoughts, and behaviors.”

Additionally, back at home, his marriage fell apart and he began sleeping rough in a remote cabin on Mynyddislwyn mountain in Caerphilly County, Wales, England.

Mikey was sleeping on his friend’s sofas until he started to build a cabin high up in the woods. He found that spending time in nature and creating achievable goals helped him feel better.

“Even though I went through starvation for long periods of time, I’ve come away from two years of homelessness with a deep appreciation for the simple things that can often be taken for granted and an understanding of suffering that can’t be taught in books,” Mikey said.

“I found employment, started private mental health treatment, and began to understand myself. I started to make progress, reconnecting with friends and family I previously avoided and isolated myself from.”

This helped Mikey find the direction and purpose he was looking for in his life.

Unfortunately, when he came home one day, he found that the cabin he’d begun building was reduced to rubble for breaching forestry regulations, as he didn’t have a planning permit.

However, a local farmer’s family offered space to Mikey so that he could live and rebuild on that land.

They offered him their caravan, which he lived in for 18 months. He started building a fort because of the positive impact the first cabin had on him.

Mikey’s vision was to use the castle to offer a “therapeutic-based support service for veterans.”

During the next three years, he used only natural, local resources to build his own home fort, which is the base of his organization, Endex.

For Mikey, it was an amazing experience. He said that, from being completely on his last legs, struggling to live and survive, rebuilding the cabin gave him small goals that he could achieve every day, on his own.

“I had no phone, no TV, no radio. Spending so much time in nature, completely isolated away from outside pressures allowed me to find myself again. So, as the cabin grew, so did I,” Mikey said. “When I started to rebuild the second cabin, lots of people and charities started to take interest.”

Mikey was allowed to express his thoughts and thus, with a diverse team of passionate and understanding people, Endex was born.

The organization offers a variety of skills-based courses to help veterans rebuild their lives.

Endex promotes ”self-growth, development, worthiness, belief, and positive stimulation to achieving goals, surrounded by nature with people willing to listen and understand, to give encouragement and options to better one’s self.”

Mikey states that the aim of the qualifications is that it may lead to providing employment in an outdoor environment, with the workloads potentially reducing stress levels, making the role more sustainable and people suffering health conditions less likely to lose their way.

So far, the team has received over 2,500 visits to their fort from veterans and military widows. It has also helped people with mental health problems, special needs children, stroke survivors, and NHS staff.

“We are in a mental health crisis,” Mikey said. “With the Covid-19 lockdowns having a huge impact on many people’s deteriorating mental health, our work and services matter now more than ever before.”

During the lockdowns, Mikey also noticed that there was a significant increase in the number of people taking part, many of them being families.

“I guess it has given people inspiration to create their own goals and engage with nature whilst having to hike a large hill to reach the castle, promoting personal fitness,” Mikey said.

He is now writing a book that will reflect upon his experiences.