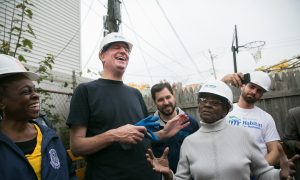 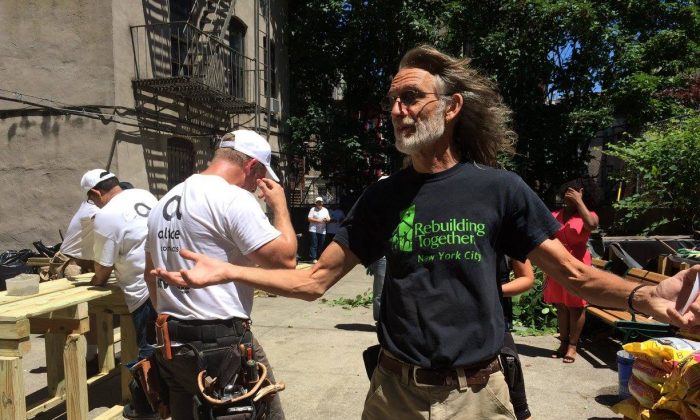 Terry Scott working on a job at Banana Kelly in the Bronx. (Courtesy of Rebuilding Together NYC)
People

Terry Scott came to New York in the wake of Hurricane Sandy, and never left
By Andrew Thomas
biggersmaller
Print

NEW YORK–With the exception of losing a loved one, losing a home after a natural disaster is one of the most devastating events that can happen to a person. The place that is supposed to be familiar and safe no longer exists. Then comes the daunting task of trying to rebuild. After a series of career changes one man found his calling as a general contractor, and put his skills to noble use in the wake of Hurricane Sandy.

Terry Scott is the 59-year-old director of construction for Rebuilding Together NYC, a national non-profit that provides workforce training programs, construction, and home renovations for low income families.

However, Scott experienced a wild series of career changes before he wound up in the Big Apple.

Scott grew up in the 1960s, and had an uncle who was a United States Navy officer who had served in the Vietnam War. When the then 5-year-old Scott saw his uncle in his formal navy white uniform, he was instantly hooked. That’s when he knew he wanted to be in the navy too. In September of his senior of high school, the 17-year-old went down to his local recruiting center. After graduation on June 27 1977, Scott was on his way to San Diego, California for basic training.

The 18-year-old ended up on a nuclear submarine, and shortly after found himself on the USS Ranger aircraft carrier. The young sailor had the opportunity to sail to a variety of countries in the Pacific Ocean including the Philippines, Hong Kong, Kenya, Sri Lanka, and Thailand. One of the most memorable experiences Scott had was when his carrier was in the Indian Ocean during the Iranian Hostage Crisis, and it was the Ranger’s fighter planes that flew as escorts for the rescued hostages. After four years of adventure, Scott was honorably discharged.

Scott had been a cook in the navy, and continued to cook after he got out. He worked at a variety of hotels and restaurants before he went to the San Juan islands to do a two year apprenticeship with a German master chef. After his apprenticeship, Scott returned to the United States. He continued to cook, working his way up to sous chef and then executive chef, and also married his wife and had a son and daughter. That’s when he made his second career change at age 27.

After working as a plumber for five years, Scott took another turn in his career. He fell into a maintenance supervisor gig at the apartment complex he was living at, and worked there for about five and a half years. His son’s friend’s mother called him one day and asked him if he could fix her garbage disposal. A week later, she was dropping her son off to play with his, and she handed him a stack of fliers advertising a $20 per hour handyman.

A month later, Scott’s phone rang and he had received a call to clean out an old condominium. He did such a good job that the clients asked if he could do a couple of more jobs at their own house.

Scott was then referred to another client, and spent a summer remodeling their house. Before he knew word of mouth had gotten around, and Scott started getting more and more business.

All of the sudden, Scott started receiving emails from property management companies around the country asking for his expertise. That’s when he officially started his own contracting business called Handyman Maintenance. Minor repair work developed into full-scale remodeling, additions, and building custom homes. The now 40-year-old handy man had his own contracting business.

Scott got a call from one of his colleagues in 2005, who told him about a complete house remodel that was being organized by a non-profit called Rebuilding Together and they needed some professional help. He and his son arrived at the location where about 80 volunteers were waiting. Twelve hours later, the home had been completely redone.

“I’m just standing there going you have got to be kidding me, how do I get more involved in this thing? This is incredible,” Scott recalled thinking.

Scott continued to volunteer with Rebuilding Together when he could for the next several years. In 2010, Scott traveled to New Orleans, Louisiana to work on 50 homes for the fifth anniversary of Hurricane Katrina. Then Hurricane Sandy hit New York two years later. A woman named Chelsea Muller who had worked at Rebuilding Together in Washington State had taken the executive director position at the New York office, and would need Scott’s help.

Four months after the storm, Rebuilding Together NYC was undertaking a project in Gerritsen Beach, Brooklyn with 500 volunteers to work on eight completely destroyed houses and three community centers. A week and a half away from the event, the organization had to let the construction manager go. They called Scott and his son, who immediately flew out to New York to volunteer and oversee the week long project.

“During that week while I’m here in New York, I’m looking [at] what’s going on, the destruction, the lack of contractors and available help, because man everybody’s busy, there’s just not enough contractors to go around and people can’t get help and these homes are destroyed,” Scott explained.

Oh his flight back to Washington, Scott made a list of 30 or 40 reasons why he should shut down his business to come back to New York and help the city and Rebuilding Together.

He returned to New York for what was supposed to be six months to help Rebuilding Together NYC come up with a construction program and group of contractors they could work with on a regular basis. There were only a couple of months left on his trip, and Rebuilding Together NYC asked what he thought about staying longer. Scott stayed in New York for an additional year as a full-time staff member, and that one year extension became a five year one. Now, Scott is an official New Yorker.

“I felt like it was an opportunity to do something that was bigger than me.”