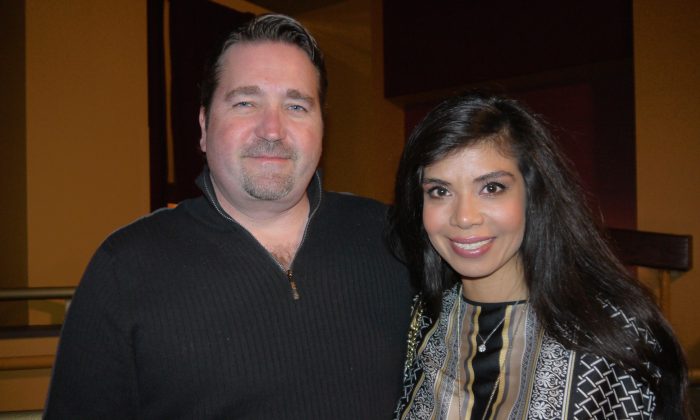 “It’s very educational,” said Adriana Holcomb, his wife, “and it has given us a lot of insight into Chinese culture and their traditions.”

The couple are referring to Shen Yun Performing Arts World Company performance of traditional dance and music at the Milwaukee Theatre, which they saw on March 5.

“It’s nice to learn about other cultures and other countries. That’s why we came here, so we could learn a little bit about another culture,” said Ms. Holcomb.

Shen Yun’s mission is to bring to stage 5,000 years of divinely inspired traditional Chinese culture. This culture was almost completely destroyed by 60 plus years of Communist rule, according to the company’s website.

The Holcombs were very impressed with what they saw. “Everything [was impressive], the dancing, how everyone is synchronized and perfect. The perfection of the dancing is amazing!” said Ms. Holcomb, a make-up artist.

An evening of two hours of traditional dance and music made her feel good. “I feel happy, and I feel excited,” she said.

Each Shen Yun performance includes some 20 presentations of music and dance, some depicting stories from China’s past and some of its present. According to the website, each story or song expresses cherished virtues of traditional Chinese culture, and has a message or moral to teach.

Ms. Holcomb found the dance The Steadfast Lotus very dramatic. It is a piece about a mother and daughter torn apart due to the current persecution of their spiritual faith in China.

His wife agreed, “I did like that too, that was fun.”

Mr. Holcomb saw similarities and differences between the Chinese culture and his own. “I think the American and Chinese cultures are quite similar where business comes in. But we are a very, very young country, and we are such a complete mix of nationalities and religions and races. We don’t have that 5,000 years of a consistent culture, so there is quite a bit of difference.”

Another difference is in how the two societies handle spirituality.

“Spirituality is not as valued by the Chinese authorities … ; we feel very strongly, as everyone knows, about the freedom of religion, and, that you should be allowed to worship as you see fit. And so that’s what I took away from [the performance],” he said.

Both husband and wife recommend the performance. “If you see an opportunity to go to Shen Yun, then we would strongly recommend that you come see it,” he said.