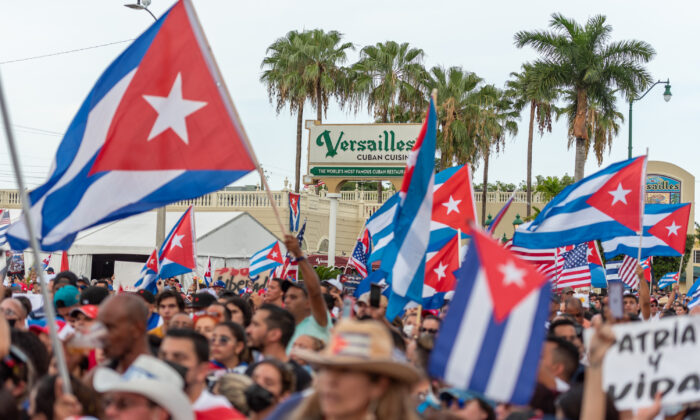 Versailles is a rallying point for both celebrations and protests. (Courtesy of Versailles Restaurant)
Restaurants

Versailles Restaurant: Come for the Cuban Sandwiches, Stay for the Community

Since its opening 50 years ago in Miami, Versailles has become arguably the world’s most famous Cuban restaurant. The accolades are well-deserved, with its wide array of house specialties including picadillo, chicken chicharrones, an epic café cubano, and the best Cuban sandwiches north of Havana.

The location on Southwest 8th Street—Calle Ocho—is far from the nonstop action of South Beach or even Downtown Miami with its forest of gleaming skyscrapers and views of cruise ships headed for tropical destinations. Located in the heart of Little Havana, just west of a car dealership and across the street from a cemetery, Versailles has a setting more akin to a pharmacy than a world-class restaurant. Yet it is in fact world-class, with patrons streaming in every day to grab a fast cafecito from the walk-up ventanita or pack the tables in the mirrored rooms, where they’re served by a wait staff that greets both regulars and newcomers like family.

“This year, we celebrate 50 years of having the privilege to serve our community and patrons around the world, giving them a taste of our Cuban culture,” said Luly Valls, a third-generation owner and granddaughter of founder Felipe Valls Sr. “It fills me with pride, seeing the fruits of all the hard work my family has poured into Versailles.” On the eve of the anniversary celebration on Nov. 10, the Valls family is encouraging patrons to submit personal stories, photos, and other materials for an archive curated by HistoryMiami Museum related to Versailles and the Cuban exile experience.

A key factor in the restaurant’s success is its importance as a rallying point for Cuban expatriates. When the doors first opened in 1971, Cubans were arriving on Freedom Flights while others desperate for freedom risked their lives to cross a 90-mile gauntlet of dangerous, shark-filled waters on homemade rafts. They found a taste of home at Versailles, making it a popular place to meet and discuss politics. Since then, the restaurant has become a community fixture for three generations of Cuban Americans.

To this day, politicians and those vying for local, state, or federal office make the pilgrimage to Versailles to seek favor and win votes. But in the end, it’s the authentic Cuban food that draws patrons from around the globe: Versailles has the real thing, as proven by the throngs of Cuban regulars who come back time after time to enjoy meals just like their abuelas made.