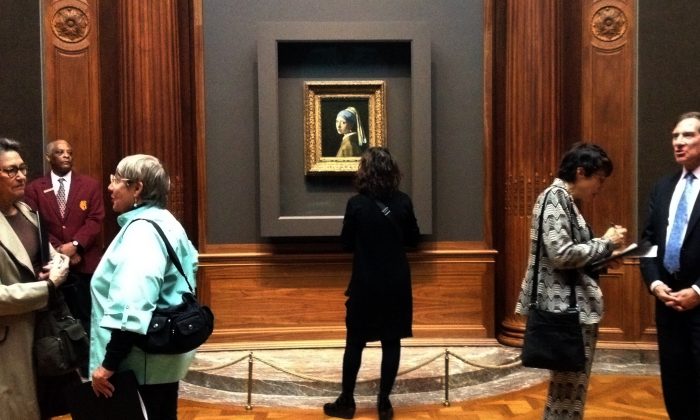 Reporters at the press preview of the Frick's Collection's newest exhibit, on loan from the Mauritshuis in The Hague. Vermeer's "Girl with a Pearl Earring" is a familiar face welcoming visitors to discover more Dutch masterworks. (Christine Lin/Epoch Times)
Arts & Culture

NEW YORK—Though she looms large as an art history icon, she actually looks quite meek, peering out of her one-and-a-half foot tall frame at a grand hall full of visitors who elbow their way toward her for a closer look at her flawless skin, her soulful eyes, her parted lips.

Johannes Vermeer’s “Girl with a Pearl Earring” is one of 15 paintings from the Royal Picture Gallery Mauritshuis in The Hague that are traveling while the Dutch museum undergoes renovations.

The Frick Collection will be their last U.S. destination after leaving the San Francisco’s Legion of Honor in June. From New York they will journey to Italy before settling back home when the Mauritshuis reopens in mid-2014. By then it will have annexed a vacant structure across the street from its current historic structure, a 17th century city palace.

The Mauritshuis has not lent an exhibition in nearly 30 years, so this expansion created opportunities for museum goers around the world to sample a part of the 800 Flemish and Dutch paintings in its holdings.

The Gilded Age was a time when Henry Clay Frick and his contemporaries collected Vermeers with fervor. Three Vermeers in Frick’s permanent collection have been grouped together in the West Gallery adjacent to the present exhibit.

The exhibition’s poster image is, of course, “The Girl With a Pearl Earring.” She’s alluring, mysterious, intriguing, and people fond of keeping a “things-to-do-before-I-die” list should take the opportunity to see this painting.

The Girl’s unknown identity and vulnerable expression invites delicious speculation, such as the 2003 film starring Scarlett Johansson in which she is a peasant maid who becomes Vermeer’s model. The film is based on Tracy Chevalier’s novel which—sorry to dash fanciful notions—is not based on a true story.

The fact is that the famous painting is a tronie, a type of Dutch Golden Age painting that depicts idealized faces bearing exaggerated expressions, often accompanied with exotic accessories—in this case, a headscarf and a large glass (not pearl) earring.

Tronies were popularized by Rembrandt and others in the 1630s and were sold on the market, unlike commissioned portraits of actual individuals. We don’t know who the girl really was, if indeed she was based on a model.

At any rate, the Girl makes a fine excuse to discover more Dutch masterworks, not only in this exhibition, but also in the Frick’s own permanent collection.

A Sampling of Extraordinary Talent

If you didn’t know what a tronie was before, you’ll see another example by Rembrandt, a painting of a non-specific man in feathered beret, brows pinched together in concern. Another Rembrandt of an elderly man, a friend of the artist, hangs nearby.

You’ll see portraits of Haarlem burgomaster (“mayor” in Dutch, as in “Burgomaster Bloomberg” if New York were still New Amsterdam) Jacob Olycan and his wife, who were 29 and 19 respectively when Frans Hals painted them in 1625. They’re dressed in what 17th century Holland considered ritzy: all black and white with touches of lace and brocade, inspired by Spanish fashion.

Messages that instruct moral conduct run through a few pieces.

Pieter Claesz’s still life “Vanitas,” 1630, skillfully employs the symbolism of a skull, a toppled glass, and a pocket-watch to remind the viewer that life on earth is fleeting.

A small group of pictures featuring women as the main subject juxtapose a virtuous old lacemaker, (Nicholaes Maes, circa 1655) with a girl plucking a juicy oyster from its shell (Jan Steen, 1658-60), her eyes meeting the viewer suggestively. One could imagine a parent of a young girl pointing to either of these depicted women as either a role model or a cautionary example.

But the moral pictures are not without humor.

In a larger piece, Steen portrays a raucous family gathering: an already-tipsy woman gets poured another glass of wine, someone is blowing a bagpipe at the table, and a laughing man gives a youngster a draft on his pipe. It’s a classic scene of adults behaving badly around children with no regard for the example they set.

Its title? “As the Old Sing, So Pipe the Young.”

Vermeer, Rembrandt, and Hals: Masterpieces of Dutch Painting from the Mauritshuis
Oct. 22–Jan. 19, 2014