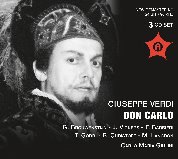 A legendary performance with Gobbi, Vickers and Christoff
Arts & Culture

Verdi’s “Don Carlo” in all its Majesty

The 1958 production of Giuseppe Verdi’s “Don Carlo” at Covent Garden is legendary for its combination of remarkable talents, notably the conductor Carlo Maria Giulini, the director of Luchino Visconti, and three of the greatest singing actors of the last century: Jon Vickers, Tito Gobbi and Boris Christoff. Unfortunately, there is no video available but Andromeda has released a newly re-mastered 3-CD set and it shows that the production was worthy of its reputation.

“Don Carlo,” based on Friedrich Schiller’s play, is an epic opera, a love story and father-son conflict set during the Spanish Inquisition. The romantic hero of the play and opera is the opposite of the real figure, who was disfigured and malignant, more like Shakespeare’s Richard III.

The action begins when Don Carlo (the son of King Philip II of Spain) travels incognito to Fontainebleau despite the fact that his country and France are at war. A peace is being negotiated and he is supposed to marry Elizabeth (daughter of the French king). They instantly fall in love and then learn that the treaty ultimately worked out requires her to marry King Philip rather than his son.

In the second act, at the monastery of St. Just in Spain, Don Carlo encounters his friend Rodrigo and the two agree to join the struggle to free the Flemish people from Spanish rule. The fact that Elizabeth is now married to his father doesn’t deter Don Carlo from continuing to pursue her but she rejects him. Meanwhile, Princess Eboli has set her sights on the heir to the throne but when he turns her down, she decides to make the King believe that Don Carlo and Elizabeth are carrying on an affair.

In the midst of these frustrated romances, the Inquisition is busy torturing and executing heretics. Don Carlo unsuccessfully urges Philip to free Flanders and is arrested when he draws his sword on his father. Actually, Don Carlo’s old friend Rodrigo is the one who disarms him, though Rodrigo is acting as a sort of double agent and is eventually killed by agents of the Inquisition. The king wants to spare his son from the death sentence but yields to the order of the Grand Inquisitor. The opera ends with the ghost of Don Carlo’s grandfather Emperor Charles V announcing that life is filled with suffering and ends when the souls reach heaven.

In the title role, Vickers (a rising star at the time) is fresh voiced and sings with urgency and a lyricism less apparent later in his career. (His Otello and Peter Grimes were two of the most powerful performances I ever saw.) Vickers did not have an Italianate sound but he more than compensated with his musicianship and dramatic intensity. Gobbi was considered the best actor of the post-war baritones and, as Rodrigo, his duet with Vickers, “Io l’ho perduta,” is stirring while his “O Carlo, Ascolta” is heart-rending. (The photo on the album cover is Gobbi as Rodrigo.) Christoff provides all the complexity of King Philip’s character with a spell-binding “Ella giammai m’amo” (the aria the King sings when he realizes that Elizabeth doesn’t love him).  Gre Brouwenstijn’s Elisabeth is also quite moving, especially in the last act. Feodora Barbieri’s Eboli is the least successful of the principals.

The sound quality of the recording is not bad, albeit with some noise from the enthusiastic audience. The liner notes are rather sparse, with a list of the arias, an essay about the opera and short bios of the singers, but no libretto.

The bonus on the third disc is truly noteworthy: ten arias by Christoff (1914-1993), presenting the great singer in a variety of material, from the comic “La calunnia e un venticello” in Rossini’s “The Barber of Seville” to the devil in Boito’s “Mefistofele” (perfect for his dark voice), several arias by Verdi (from “Macbeth” and “Simon Boccanegra”), Beethoven (“Fidelio”), Puccini (“La Boheme”), a Saint-Saens aria (from the obscure “Enrico VIII”) and finally the tour de force “Farewell and death of Boris” from probably his most famous role, the title character in Mussorgsky’s “Boris Godunov.” They are all studio recordings made between 1954 and 1961 and demonstrate why he was the leading bass of his time.