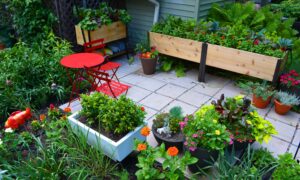 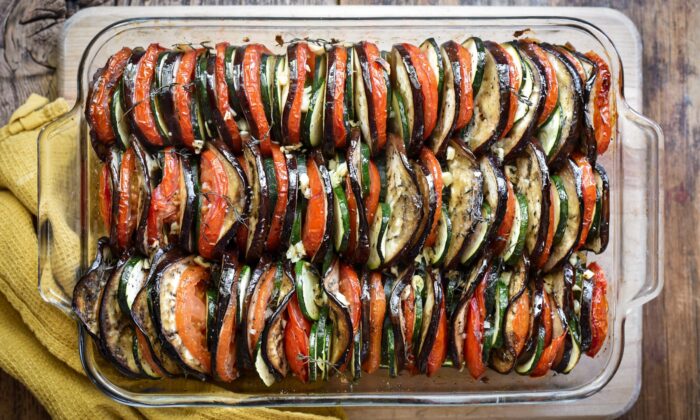 The classic summer vegetable tian is made with layered slices of tomato, zucchini, and eggplant, slow-roasted with olive oil and herbs until meltingly tender. (Audrey Le Goff)
Recipes

Vegetable Tian: A Taste of a Provençal Summer

A tian embodies the essence of Provençal summer cooking. Made with layered slices of tomato, zucchini, and eggplant, slow-roasted with olive oil and herbs until meltingly tender, the iconic dish is simple but stunning, and a celebration of the abundance of summer vegetables in this sun-drenched region of France.

The word “tian” comes from the Greek “teganon,” meaning “a dish” or “a frying pan.” Originally, the word referred to glazed earthenware vessels from Provence used for both cooking and serving, going from the oven directly to the table. These types of dishes are usually large, shallow, and sturdy, made to withstand high temperatures.

The dish was initially used to bake any type of food. Back when homes didn’t have individual ovens, families would bring their tian to their local bakery to cook in the residual heat of the ovens, after the day’s breads were baked. Over time, the dishes became more and more popular for baking layers of Provencal vegetables—tomatoes, zucchini, and eggplant—and eventually gave their name to this specific culinary preparation.

In addition to summer vegetables, a classic tian also often features staple herbs from Provence, including sprigs of thyme, rosemary, or the famous herbs de Provence, a mix of savory, marjoram, rosemary, thyme, and oregano.

Outside of the French borders, there tends to be some confusion over tian and ratatouille—both stellar classics of the Southern French cooking repertoire. This confusion was possibly heightened by Pixar’s 2007 film “Ratatouille,” in which the main character, Remy, cooks up a “ratatouille” that’s actually a tian.

Ratatouille also is a Provençal specialty made with tomatoes, zucchini, and eggplants—among other ingredients—but it calls for the vegetables to be cubed and gently simmered together on the stovetop, creating a soft and spoonable stew. A tian, meanwhile, involves slices of the vegetables layered in a dish and baked in the oven, until tender underneath and lightly charred and crisp on top.

Variations on a Tian

It should also be noted that there isn’t just one recipe for tian, but several variations of it. The classic summer vegetable version is the most popular, but you’ll also find recipes made with asparagus in the spring, Swiss chard and mushrooms in the fall, and cabbage, winter squash, or potato in the winter—just to give a few examples.

Some might be garnished with fish—often from the Mediterranean, such as anchovies, cod, or mullet—or made with delicate meats, such as lamb or veal. It can even be a dessert, swapping summer vegetables for layers of figs, peaches, or apricots.

Perhaps, in part, because it’s too often compared to—or confused with—ratatouille stew, the classic tian has a reputation for being dry. Here are a few tips to prevent that from happening.

Lay the vegetables on a moist component. A bed of partially-cooked onions at the bottom of the dish brings extra moisture to help soften the vegetable slices layered on top.

Be generous with the olive oil. Before transferring the tian to the oven, drizzle about 1/4 cup of extra-virgin olive oil over the vegetables to help tenderize them. This will also create nice crisp edges at the end of the baking time.

Bake it low and slow. The goal of baking the tian is eventually to “confit” the vegetables, meaning that they should slowly cook in their own juices, at a lower temperature and for a long period of time, until perfectly tender. Don’t attempt to rush this process for fear of an undercooked or dry result.

When picking out your vegetables, try to choose ones that are about the same in diameter—it will be easier to assemble the layers and create even rows. However, if some vegetables are smaller, you can adjust by using two or three slices at a time, instead of one.

Another key to a well-executed tian is to pack the slices as tightly as possible, as they will shrink while baking.

This tian is the perfect companion to roast chicken, grilled meat, or fish.

Preheat the oven to 320 degrees F with a rack in the middle.

Halve one of the garlic cloves, and rub the inside of an 8-by-11-inch baking dish (earthenware, ceramic, or plexiglass) with the cut side of one of the halves. Peel the onion and slice it into half-rounds. Add to the baking dish, along with 2 tablespoons of extra-virgin olive oil, and toss to coat. Bake for 10 minutes, until the onions are translucent and slightly fragrant.

Meanwhile, mince all of the garlic, including the halved clove. Slice the tomato, zucchini, and eggplant into 1/4-inch-thick slices.

Remove the dish from the oven and transfer onto a cooling rack or heat-proof surface. Arrange the tomato, zucchini, and eggplant slices on top of the onions, standing upright, in several rows of tightly packed, alternating layers. When finished, season with salt and pepper to taste. Sprinkle with the minced garlic, making sure most of it falls in between the slices of vegetables. Drizzle with the remaining 1/4 cup olive oil and garnish with thyme sprigs.

Cover the dish with foil, seal the edges, and poke a tiny hole in the middle for steam to escape. Fill a small oven-safe bowl or ramekin with water. Place both the tian dish and the water-filled vessel in the oven.

Bake for 1 hour. Then remove the foil from the dish and bake for an additional 30 to 40 minutes, until fully cooked and the tops of the vegetables are wrinkled. Optional: Finish with 1 to 2 minutes under the broiler for crisp, charred edges.

Remove from the oven and let cool for at least 15 minutes before serving.

Audrey Le Goff is a French food writer, photographer, and creator of the food blog PardonYourFrench.com, where she shares recipes and stories from her beloved home country, France. She is the author of the cookbook “Rustic French Cooking Made Easy” (2019). She currently lives in Niagara, Canada. Follow her on Instagram @pardonyourfrench.