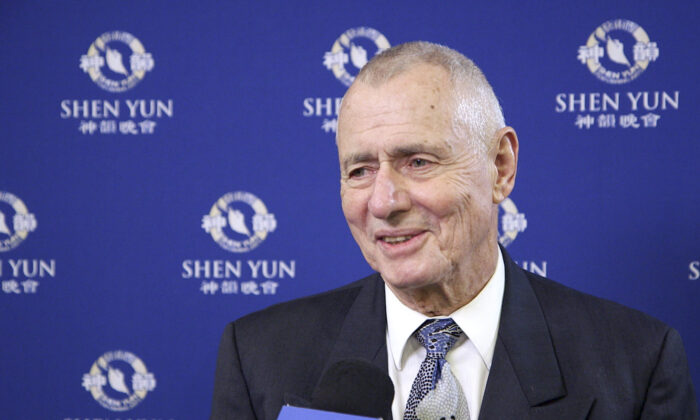 OTTAWA, Canada—A classical Chinese dance performance from the United States held special relevance for one Canadian surgeon who has been working for the past few years to raise awareness about human rights abuses in China.

Graeme Barber, MD, is a retired vascular surgeon who marveled at Shen Yun Performing Arts’s beauty, artistry, and themes of hope and freedom on Dec. 28, 2019, at Ottawa’s National Arts Centre.

“Beautiful, very skilled, both musically and choreographed, and the dance, and the athleticism, and the emotion of it all,” Barber said in response to Shen Yun.

“Falun Gong is a discipline, and there’s spirituality to it. And there’s a lot of spirituality in that show tonight,” Barber noted. “I think that’s an important part of life; unfortunately it’s not part of communist life, because they’re atheist.”

Barber has been a member of the Coalition to End Transplant Abuse in China for three years. From his own research and his colleagues’, he has sadly concluded that the Chinese regime‘s determination to wipe out traditional culture has led them to steal organs from followers of Falun Gong, while they’re still alive, as a form of persecution and profiteering.

One of the dances in Shen Yun, titled “Abetting the Wicked,” depicts a young man subject to just this by communist party members against his will, as punishment for defending innocent Falun Gong practitioners. This real-life abuse, documented since 2006, is known as forced organ harvesting.

“Sometimes it’s a bit the elephant in the room, nobody wants to talk about it. So to be happening right in front of you, ‘no that’s not really happening.’ … It’s amazing how a lot of [forced organ harvesting] is still not common knowledge,” the former surgeon said.

In July 2019, Barber voiced his concerns in a letter to the Ottawa Citizen over the fate of China and the world if forced organ harvesting remains improperly addressed by the international community.

“After several years of research, I concluded that there is little information about this crime for two reasons: First, it is so evil it is essentially unbelievable. Second, it would be impossible for any respectable country to engage in any way with such an evil government if the respectable country truly believed what was happening. It is necessary to pretend or to believe it is not happening.”

Tonight, he voiced the same concerns and applauded Shen Yun for raising awareness of these crimes. “I think it’s very important that the world knows what’s going on, there’s no question about that.”

Barber encourages everyone to see Shen Yun, primarily because as a theatrical experience, he feels it’s wonderful.

“I would definitely recommend [Shen Yun], absolutely, definitely,” he said.  “It was a very enjoyable experience and as I say on a cultural and artistic level, it was absolutely gorgeous, absolutely beautiful!”

“There is, in my opinion, the two underlying things, which is propagation of a beautiful history that everybody in the world should know about. And then there’s also to bring out the human rights issues that are going on in the home country of many of the people that are putting on this show! Maybe they’ve been adopted by other countries by now, but they all have deep roots in their homeland, I suspect, and would be happy to be back to be there if they could,” Barber concluded.