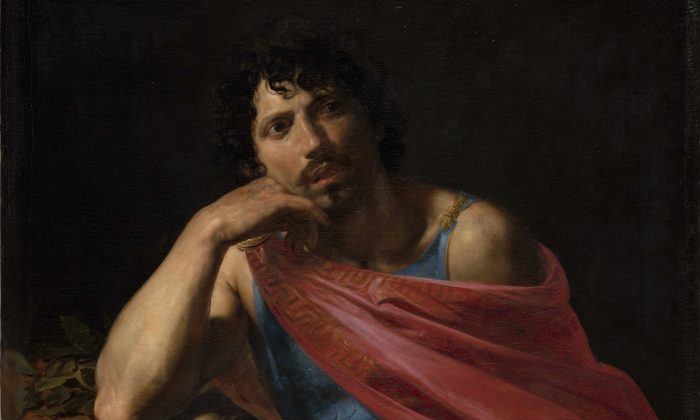 NEW YORK—Walk into the exhibition on Valentin de Boulogne at the Metropolitan Museum of Art and you risk being turned inside out or pulled into the midst of a Baroque drama. The paintings spew such emotive force that they can knock you about into sensory overload and then leave you in a state of intrigue.

“Valentin who?” you may ask. No, not Valentino, the heartthrob silent-screen actor, though Valentin de Boulogne’s paintings can draw you in like a movie. The artist was nicknamed “lover boy” by his confraternity, the Bentvueghels (Dutch for “birds of a feather”), who were Bacchus followers adept at debauchery. He died young, at 41, during a night of heavy drinking and a subsequent high fever in 1632.

Whatever his nickname may imply and despite the company he kept, Valentin received commissions from Rome’s most prominent patrons—Francesco Barberini (nephew of Pope Urban VIII) among them. Yet little is known about Valentin, which compels art historians to cling to every clue they come across.

One of the all-time greatest patrons of the arts, Louis XIV, the Sun King no less, had paintings by Valentin on the ceiling of his bedchamber in the Palace of Versailles. Although Valentin became famous in his lifetime and continued to be revered well into the 19th century, it’s baffling that hardly anyone has heard of him today.

“We often talk about the judgment of posterity as though it was something fixed, but the truth is that the determinacy of quality and importance are in constant flux,” said Keith Christiansen, chairman of The Met’s European paintings department, at a press preview.

History is rather fickle, perhaps more at the mercy of a power play of wills than we may want to realize. “In the last 15 years, our knowledge of what took place in Rome in the first two decades of the 17th century has been completely rewritten. Everything you’ve read in text books has been completely out of date,” Christiansen said.

Finally setting the record straight, The Met has opened “Valentin de Boulogne: Beyond Caravaggio,” the first exhibition dedicated to a genius among 17th-century French artists. It runs until Jan. 16, 2017, then will go on view at the Musée du Louvre in Paris from Feb. 20 to May 22, 2017.

Of the 60 paintings by Valentin that survive, The Met is displaying 45, including two that had never before been taken from the bedchamber of Louis XIV in Versailles (“Saint Matthew” and “Saint Mark”). Others include pieces from the Musée du Louvre, a haunting altarpiece from the Vatican (“Martydom of Saints Processus and Martinian”), and other works depicting biblical, mythological, and daily life themes from collections in Rome, Vienna, Munich, Madrid, London, and Paris.

The exhibition is a wish fulfilled for Christiansen, whose contagious enthusiasm for Valentin started three decades ago. In 2008, he told his colleagues, “It’s time.” At the urging of Sébastien Allard, director of the paintings department at the Louvre, he teamed up with the French art historian Annick Lemoine to bring Valentin back to the center stage of art history.

A Most Passionate, Caravaggesque Artist

Born in 1591 in the small town of Coulommiers near Paris, Valentin arrived in Rome perhaps as early as 1609 and stayed. Documents of a trial dismissed in 1614 indicate he had lived in the Eternal City for some time already, long enough to get into trouble.

He lived in poverty in the parish of Santa Maria del Popolo on a side street adjacent to via del Babuino, sharing rooms with other artists, such as Gérard Douffet, Timoteo Oto, and David de La Riche.

Rome in the early 17th century was the cultural capital of Europe, the destination of choice for artists. With an emerging art market, they were not beholden to specific patrons, or the church. They had more freedom to choose their own subjects and to rethink their subjects. Artists had to establish their own identity via the market.

Like many artists from across Europe, Valentin was drawn to the new method and style of painting that Caravaggio had started, which primarily meant working directly from live models, using a dramatic chiaroscuro technique (a strong opposition between light and dark), and depicting everyday themes of drinking parties, cardsharps, palm readers, and musicians.

Valentin never met Caravaggio. That was probably for the best because Caravaggio was notorious for bullying any imitators. By the time Valentin arrived in Rome at around 1609, Caravaggio had already fled to Malta in 1606—wanted for murder, never to return.

“Valentin embraced the legacy of Caravaggio and then took it to new heights, endowed with a greater fluency and authority—something that would withstand comparison with the greatest examples of Renaissance painting,” Christiansen said.

The exhibit displays the span of Valentin’s artistic development—from taking on Caravaggio’s approach to making it his own—in three parts.

From around 1614 to 1622, his work was rather severe, with sculptural figures depicting lowlife themes, strongly influenced by Caravaggio’s followers. In his second phase, Valentin started to form his personal style, in which his compositions became more complex, more dramatic, and tinged with melancholy. He used a neo-Venetian palette, becoming increasingly refined. He looked to Jusepe de Ribera and the sculptor Gian Lorenzo Bernini for inspiration. In his last and final phase, from 1627 to 1632, he came into his own, refining his radical naturalism yet influenced by the sophisticated culture of the noble Barberini family. He experimented with landscapes and altarpieces, fables and allegory.

Valentin’s paintings capture moments suspended in action—like movie freeze-frames. The floor is seldom shown. Figures are arranged in dense choreographies, cropped tightly on the edges of the canvas. Some are falling; others have their backs to the viewer, or look directly at the viewer. All of these compositional techniques draw you into his paintings, producing a sensation of unfolding drama.

All of the figures and objects in the paintings seem chaotically arranged; yet paradoxically they are unified and convey a sense of harmony. Each figure with its varied intense expressions, depicted without any artifice or idealization, seems introspective.

Art historian Lemoine calls Valentin “the master of ambiguity.” The ambiguity is intended on a number of levels.

While organizing the exhibition, the curators had seen each painting one at a time. When they brought them into the five galleries in The Met, “Seeing them all together was even more overwhelming than what we had thought,” Lemoine said. “Each one gives you something very personal. You feel that he’s giving everything in each painting. You could do just one exhibition on each of the paintings.”

The exhibit culminates to a crescendo in the fifth gallery of the exhibit, dispelling any doubts that this is an artist who has indeed gone beyond Caravaggio. Five years before Valentin’s death, his fame increased and was crowned in 1629 by the commission to paint an altarpiece for Saint Peter’s Basilica, “The Martydom of Saints Processus and Martinian,” the highest honor a painter could receive at that time.

Valentin was the first and last to bring a Caravaggesque painting into Saint Peter’s. “So we are left with the moment of suspension of artists who had now risen to the top and with Valentin’s death, Caravaggism is over in Rome,” Christiansen said.

Despite his celebrity toward the end of his life, Valentin died poor. In the church of Santa Maria del Popolo’s register of the dead, his reputation is carefully recorded: Valentin de Boulogne, pictor famosus. “When Jacques Louis David arrived in Rome in 1779, he made a copy of Valentin’s ‘Last Supper,’ which gives you an idea of the centrality of this artist in the history of French painting,” Christiansen said.

“Valentin de Boulogne: Beyond Caravaggio” is a beautiful, stirring, tour de force of an exhibit. Christiansen says all who worked on it, at every step, including the riggers and heavy lifters who unpacked and hung the paintings, told him, “This is an amazing show.”

“I think this is a good sign because the pictures do speak for themselves,” Christiansen said. “They are fantastic!”

Keith Christiansen (John Pope-Hennessy Chairman of European Paintings) will discuss Valentin de Boulogne in a series of two ticketed talks on Oct. 19 and 26 in The Met’s Grace Rainey Rogers Auditorium.

The catalog “Valentin de Boulogne: Beyond Caravaggio,” after the exhibition, is available from The Met Store and Yale University Press. It comprises discussion of nearly 50 works and essays by a team of international scholars elucidating, among other topics, the violent and tumultuous world of the artist, his development and techniques, and the emerging art market in Rome.