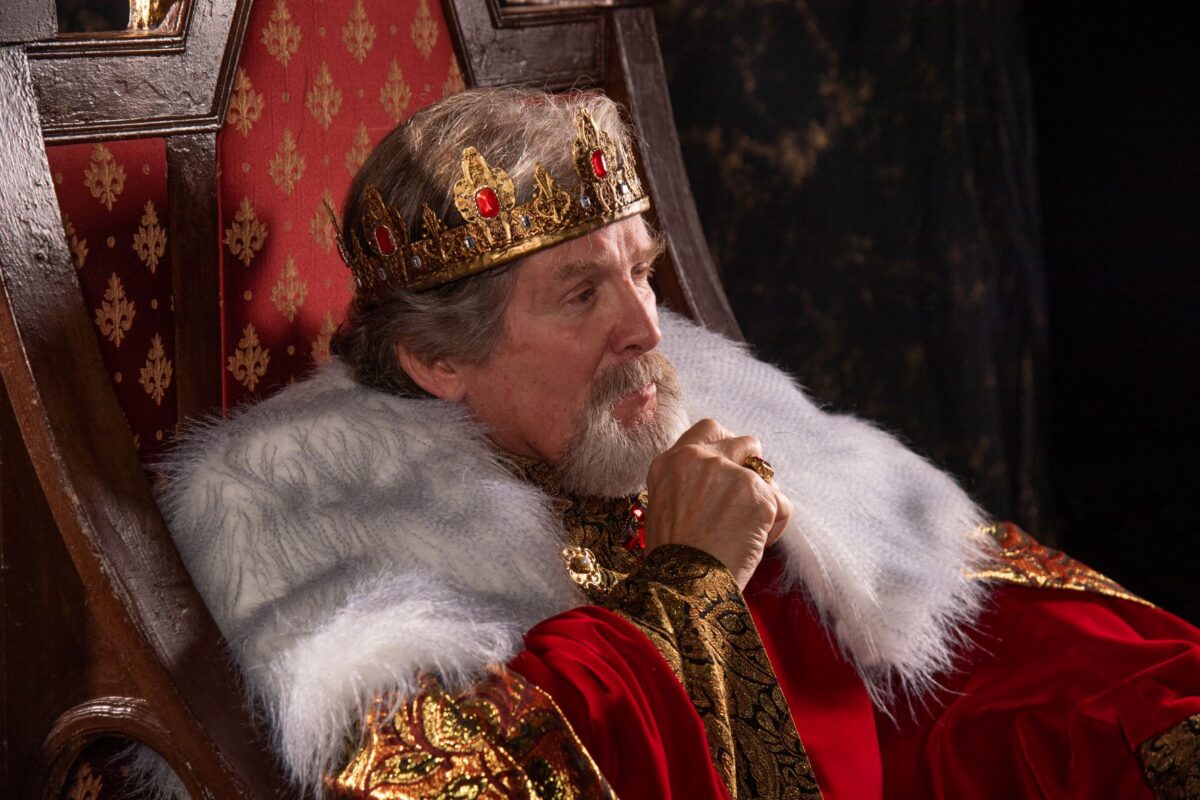 Lear's laughter is music to my famished ear
BY David Dudley TIMEJuly 14, 2022 PRINT

CEDAR CITY, Utah—We’re often repulsed by the laughter of those we believe to be mad.

In the Utah Shakespeare Festival’s performance of “King Lear,” which eschews gimmicky revisions in favor of a more traditional approach, Lear’s laughter reveals his humanity, even if we don’t understand why he laughs.

“The great challenge of this role is to make Lear human,” said Anthony Heald in an interview, whose turn as Lear is all too human.

As Lear contends with his fall from power and the inability to make peace with his daughters Goneril, Regan, and Cordelia, Heald’s nuanced performance reveals a man who laughs as he tries to make sense of a strange new world. He laughs at the absurdity of his situation, even as it becomes increasingly dismal, as we all do when the only other option is to weep.

The 80-year-old Lear’s journey begins as his youngest daughter, Cordelia, refuses to play the game of “who doth love us most.” He’s plunged into a darkness reserved for parents who no longer understand and thus can no longer communicate with their offspring.

The rules of good form dictate that Cordelia, played by Kendall Cafaro, should follow suit and employ florid language and exaggerated sentiments to express her love for her father. But, as Cafaro plays it, she’s too smart, sensitive, and pure for such fake stuff. She refuses to play the game. In return, she’s cast out of her father’s heart, as well as his will.

After learning that Cordelia will not inherit a portion of the kingdom, the Duke of Burgundy withdraws his proposal of marriage. Lear, who  passed his authority to his daughters along with their shares of the kingdom, finds himself vulnerable to their disingenuous actions.

It’s a heart-wrenching tale of what happens when parents war with their children.

What Does ‘Lear’ Have to Say Now?

Though written between 1605 and 1606, the story feels urgent and timely. Shakespeare’s London was struggling to survive a plague. And the Gunpowder Plot, an attempt to assassinate King James I and blow up Parliament in order to end the persecution of Roman Catholics, was fresh in the minds of Londoners. Without being preachy or prescriptive, the play offers a window into current events through which we may pause and reflect.

As in many tragedies that have come down to us through the ages, the problems of society are visited upon the family. For director Vince Cardinal, families in crisis—child against father, and sibling against sibling—are at the heart of the play.

“Having recently lost my mother to Alzheimer’s,” Cardinal said by email, “I connect to Lear’s struggle to make sense of his condition, and his daughters’ imperfect, and ultimately tragic, reactions to their father’s unreasonable demands.”

In this production, Heald’s Lear is at pains to make sense of his daughters’ choices. After Cordelia flees to marry the king of France, Goneril and Regan refuse to take Lear into their homes. Alone and exposed to the elements, he’s forced to face the consequences of his actions.

In Shakespearean tragedy, the gods are in control. No matter how one might try to control the world, fate will run its course. And this leaves Lear, along with the rest of us, with few choices. On one hand, he must contend with his disingenuous daughters, Regan and Goneril, who take what they can get. On the other hand, the silent, sincere Cordelia is left in the end with nothing but her love for her father, an imperfect man.

Lear finds that there is no escape from his past. But this staging of “King Lear” never falls into the trap of taking itself too seriously or, worse, leaning into the lugubrious aspects of the play.

Heald’s performance charts the descent of Lear, but it feels as though he may turn a corner at any moment and make things right again.

Cardinal’s direction keeps the pace driving, while taking care to highlight the pathos in comedy and the humor in tragedy. Though the characters come from traditional stock types, Cardinal’s direction and the players’ interpretations lend depth to the roles.

And Cardinal never loses sight of the plot’s twists and turns, even as the language remains one step ahead of the audience. “Even deep in his loftiest verse, Shakespeare attended to entertainment value,” he said.

Shakespeare Under the Stars

“King Lear” plays the Engelstad stage, in the open air, through Sept. 10. After we’ve spent so much time indoors these past two years, much of it staring at small glowing screens in our homes, it feels satisfying to see a Shakespeare play under the stars.

Spending time with his larger-than-life characters, landscapes embedded in cascading poetic language, and keen understanding of human nature feels like a ritual that we badly need in this moment.

We sit under the same sky that the Elizabethans did centuries ago, wrestling with an unflinching portrait of the human condition. As Lear made his famous appearance on the heath, the moon shone down through the open ceiling, and a gentle breeze tickled the nape of my neck. A shiver ran up my spine as I witnessed the magic that can occur when artists invite the world into the theater.

Played in that environment, “King Lear” acquires its tragic dimension. Being severed from all familial ties, Lear is left to wander in the elements, lost and naked in a world whose boundaries are blurred with our own.

David Dudley
Follow
David Dudley is a Southern Utah-based journalist, educator, and playwright. Drop him a line at daviddudley@gmail.com
SHARE
Friends Read FreeCopyFacebookTweet
You May Also Like