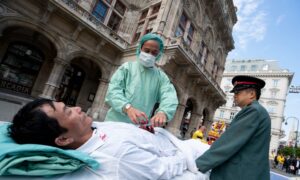 'It Will Make You Physically Sick:' Professor Recounts Probe Into Organ Harvesting in China
0 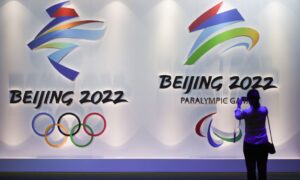 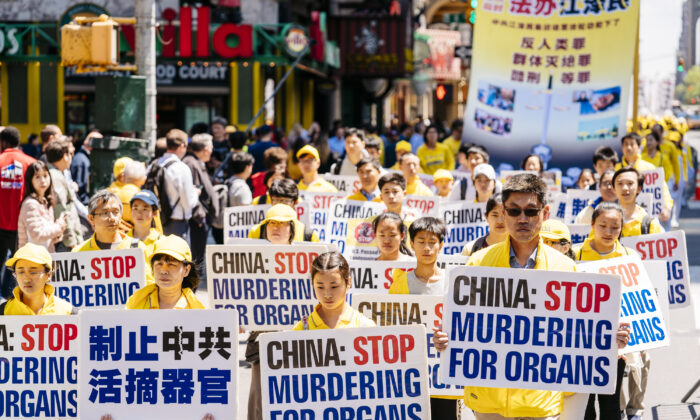 Every year, the State Department assesses countries around the world on their human rights record.

Pompeo reiterated his remarks from July last year at a State Department-hosted religious freedom conference, calling China’s treatment of Uyghurs in northwestern China’s Xinjiang the “stain of the century.” He added that Beijing “tries to hide what it’s doing by intimidating journalists.”

More than a million ethnic Muslim minorities, including Uyghurs, Kazakh, and Kyrgyz people, are being detained in roughly 1,200 internment camps in China’s Xinjiang region, according to the 2019 Trafficking In Persons report by the State Department. Beijing claims these camps are “vocational training centers.”

“We pray for a day when Cubans, Venezuelans, Chinese, Iranians, and all peoples can speak and assemble freely without fear of their own governments,” he concluded.

The panel, known as the China Tribunal, concluded beyond a reasonable doubt that state-sanctioned forced organ harvesting had taken place for years in China “on a significant scale,” and is still taking place today.

Additionally, panelists found that adherents of Falun Gong have been the main source of organs.

Falun Gong, also known as Falun Dafa, is an ancient spiritual practice with meditative exercises and moral teachings. Since July 1999, the Chinese regime has initiated a nationwide persecution, throwing hundreds of thousands of adherents into prisons, labor camps, and brainwashing centers, according to the Falun Dafa Information Center.

The tribunal released its full judgment on March 1, including new evidence about Chinese officials’ direct involvement in forced organ harvesting.

The State Department also questioned China’s claim in 2015 of having stopped sourcing organs from executed prisoners for use in transplants, citing a 2019 study by the Australian National University and published in the scientific journal BMC Medical Ethics. Beijing claims that since 2015, it has relied on a voluntary donation system for organ transplants.

The study found that there was “highly compelling evidence” that Chinese official statistics on organ donations were “falsified,” including data that corresponded to a mathematical equation. The study pointed out that China’s donation system likely involved “nonvoluntary donors,” possibly prisoners, that are misclassified as voluntary donations.

Lawyers in China are also being targeted by the Chinese regime for taking on “sensitive” cases, such as “defending pro-democracy dissidents, house-church activists, Falun Gong practitioners, or government critics,” the report stated. Such lawyers were punished by authorities, including with revocation of their licenses or imprisonment.

For example, Liu Zhengqing, a lawyer based in southern China’s Guangdong Province, is known for defending rights activists and adherents of Falun Gong. In January this year, Liu had his license revoked after he was charged by local prosecutors with “jeopardizing national security.”

According to a December 2019 report by Radio Free Asia (RFA), Liu’s charges were related to his representation of two clients: Zhang Haitao, an electronics salesman who was given a 19-year prison sentence in 2016 for online criticism of Chinese authorities for their treatment of Uyghurs; and Li Yanming, a Falun Gong adherent living in Guangdong’s Foshan city.

“Lawyers are required to be members of the CCP-controlled All China Lawyers Association, and the Ministry of Justice requires all lawyers to pledge their loyalty to the leadership of the CCP upon issuance or annual renewal of their license to practice law,” the report explained. The regulation was issued in July 2018, a move that drew concerns about the further erosion of rule of law in China.

Another Chinese lawyer, Qin Yongpei, who worked on cases involving Falun Gong adherents and lawyers arrested in connection to a nationwide crackdown in July 2015, was disbarred in May 2018. The crackdown, whereby hundreds of lawyers were rounded up across China, is commonly known as the 709 incident.

He was then detained by secret police in southern China’s Guangxi region in October last year, on charges of “inciting subversion of state power,” according to the State Department report. He was formally arrested in December.

On March 11, RFA reported that Qing’s wife, Deng Xiaoyun, was denied access to her husband’s court file by the prosecutor’s office in Nanning, the capital of Guangxi. The court denied her request on the grounds that the file involved “national secrets.”

The report identified many political prisoners that are still detained in China as of the end of last year, including two Falun Gong adherents, Bian Lichao and Ma Zhenyu.

Bian, a former middle school teacher in Tangshan city in northern China’s Hebei Province, was sentenced to a 12-year prison term in 2012, according to Minghui.org, a website that monitors the persecution of Falun Gong in China.

In March 2014, Bian’s wife and daughter were kidnapped by local police in Hebei. They were then tried in court in December the same year. In April 2015, the daughter was sentenced to 3.5 years and the wife 4 years, on charges of “promoting Falun Gong on the internet.”

In July 2019, Ma’s wife, Zhang Yuhua, who has escaped to the United States, said that her husband was serving a 3-year prison term.

Appearing at the aforementioned 2019 religious freedom conference hosted by the State Department in Washington, Zhang expressed worries that her husband may be killed for his organs while imprisoned.

According to Zhang, Ma was sentenced in 2017 for sending six letters to the Chinese regime’s top leaders urging them to end the persecution of Falun Gong.