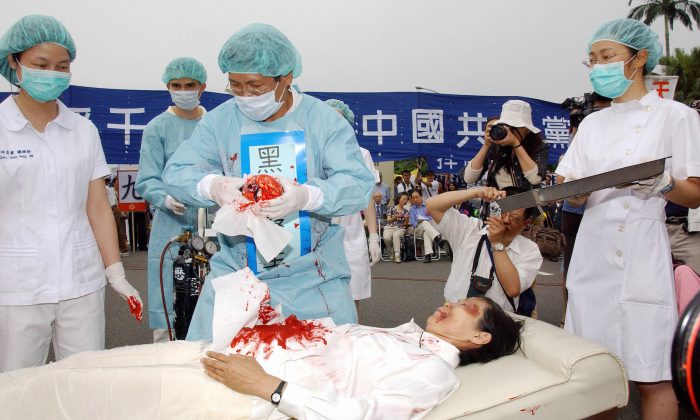 During a rally joined by thousands of Falun Gong practitioners, four demonstrators play in an action drama Taipei, Taiwan April 23, 2006 (Patrick Lin/AFP/Getty Images)
By Cathy He

Governments and international bodies can no longer turn a blind eye to one of the “worst atrocities committed” in modern times, experts said—as the world’s first independent legal analysis of evidence regarding forced organ harvesting in China concluded that the grisly practice has continued unabated.

An independent people’s tribunal, known as the China Tribunal, on March 1 released its full judgment after an 18-month investigation. Panel members reviewed written and oral evidence, including testimony from over 50 witnesses given over two public hearings in December 2018 and April 2019.

Last June, the tribunal delivered its findings in London, concluding beyond a reasonable doubt that state-sanctioned forced organ harvesting from prisoners of conscience had taken place for years in China “on a significant scale,” and is still taking place today.

The main organ supply came from imprisoned practitioners of the persecuted spiritual group Falun Gong, according to the tribunal.

Falun Gong, also known as Falun Dafa, which consists of meditative exercises and moral teachings centered around the tenets truthfulness, compassion, and tolerance, has been subject to a brutal persecution by the Chinese communist regime for more than two decades. Hundreds of thousands of adherents have been thrown into prisons, labor camps, and brainwashing centers, where many have been tortured in an effort to force them to renounce their faith, according to the Falun Dafa Information Center.

“The conclusion shows that very many people have died indescribably hideous deaths for no reason, that more may suffer in similar ways, and that all of us live on a planet where extreme wickedness may be found,” it said in its final 160-page report (pdf), which included 300 pages of supplementary materials.

The tribunal considered a range of evidence in reaching its conclusion, such as hospitals offering extremely short wait times—from a few days to weeks—for organ transplants, widespread blood testing and other medical testing of imprisoned Falun Gong practitioners and Uyghurs, and previous research on the issue.

“Such short-time availability [of organs] could only occur if there was a bank of potential living donors who could be sacrificed to order,” the judgment said.

It found that blood testing and medical testing, including ultrasound, radiographic, and physical organ examinations, of Falun Gong and Uyghur prisoners—which was not conducted on other prisoners—“is highly suggestive of methods used to assess organ function.”

“The Tribunal must ask itself why a prison management system might test anyone in [such] ways … when such testing was not required for the purposes of internment,” it said.

While the Tribunal could not definitively conclude that imprisoned Uyghurs were victims of forced organ harvesting, it said that the vulnerability of the group to “being used as a bank of organs is … obvious.”

It’s estimated that up to 1.5 million Uyghurs and other Muslim minorities are detained in internment camps in the northwestern region of Xinjiang as part of the Chinese regime’s purported crackdown on “extremism.”

One piece of evidence presented in the report directly implicated former regime leader Jiang Zemin, who directly ordered the harvesting of organs from Falun Gong adherents.

“Jiang issued the order [to take organs],” said Bai Shuzhong, a former minister of health for China’s military, when he was questioned by an investigator during an undercover phone call in 2014.

Another piece of evidence of officials’ direct involvement in forced organ harvesting was revealed during an undercover phone call in 2016 with Zhu Jiabin, who was the head of the 610 Office in Mudanjiang, a city in Heilongjiang Province. The 610 Office is a Gestapo-like secret police force that was established expressly to carry out the persecution of Falun Gong adherents.

“I am called the butcher specializing in live organ harvesting. … It’s nothing, just like slaughtering pigs,” Zhu said in the phone call, before adding, “After scooping the organs out, I would sell them.”

All phone calls submitted to the China Tribunal and included within the report have been “individually validated by independent investigators to ensure credibility [of] origin and content,” according to the Tribunal’s press release.

The tribunal also said in the report that it is “convinced that official Chinese transplantation statistics have been falsified” in order to cover up forced organ harvesting.

In 2015, the Chinese regime said it would stop sourcing organs from executed prisoners and rely exclusively on a new voluntary donation system.

In November last year, a study published in the scientific journal BMC Medical Ethics found that “Beijing’s reported organ donation numbers don’t stack up, and there is highly compelling evidence that they are being falsified.”

The study showed that official Chinese figures didn’t appear to be real statistics from donations, but rather data generated using a mathematical equation.

‘The Time for Ignoring the Issue Has Passed’

With the release of the tribunal’s comprehensive findings, advocates and experts urged governments and international organizations, such as the World Health Organization and The Transplantation Society, to take action and hold the Chinese regime to account.

The tribunal’s chair Nice said in a statement that the judgment “confirms how all people or organizations interacting in any substantial way with the PRC [the People’s Republic of China] should recognize that they are interacting with a criminal state.”

Susie Hughes, executive director of advocacy group International Coalition to End Transplant Abuse in China, similarly said: “It is no longer acceptable for governments, medical bodies, and leading human rights organizations to say there is not enough evidence. The enormous task of assessing all available evidence has now been completed and is available for all to see.”

Ethan Gutmann, a China analyst who has investigated organ harvesting for more than a decade, said the tribunal’s undertaking amounted to the most comprehensive inquiry yet into the issue.

“These people sat down and read everything. No one else could have claimed to have done that,” Gutmann told The Epoch Times.

He said that the judgment’s release, at a time when countries are working to contain the novel coronavirus outbreak that originated from central China—which may have been prevented from spreading had the regime not initially covered up the severity of the outbreak—provided a good opportunity for the international community to “take stock on who we’ve partnered with here.”

“The Chinese Communist Party is not a reliable partner in any sense,” Gutmann said. “They should be blackballed from the medical world. They should not be coming to our conferences, they should not be publishing in our medical journals.

“They should be treated right now as pariahs.”

More than two dozen academic studies about transplanted organs written by researchers in China were retracted in 2019 after doctors couldn’t prove that donors gave consent.

Dr. Torsten Trey, executive director of Washington-based advocacy group Doctors Against Forced Organ Harvesting, called on the United Nations to investigate organ harvesting in China, given the tribunal’s conclusion that it amounted to crimes against humanity under international law.

“There is not something like a free pass for China that it can commit crimes against humanity or a genocide, without attracting the scrutiny of the world,” Trey said in an email to The Epoch Times.

David Kilgour, former Canadian Secretary of State for Asia-Pacific and another longtime researcher on the issue, told The Epoch Times that countries that have Magnitsky Acts—legislation that sanctions human rights abusers—should target Chinese officials involved in organ harvesting. Their assets should be seized, and they should be denied entry visas, he said.

“We should show that we have some backbone on this issue,” Kilgour said.