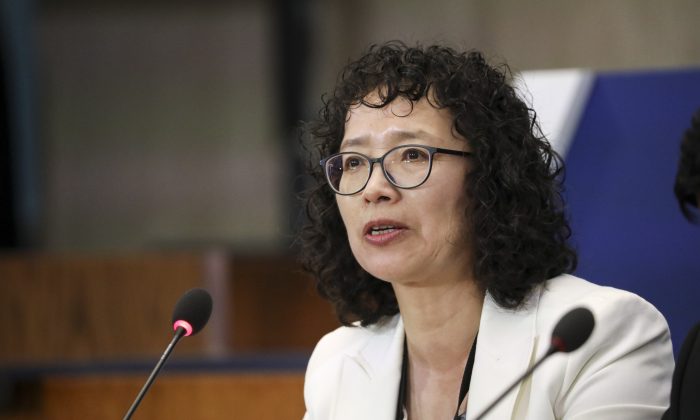 Yuhua Zhang, a Falun Gong practitioner who survived persecution in China, speaks at the Ministerial to Advance Religious Freedom at the Department of State in Washington on July 17, 2019. (Samira Bouaou/The Epoch Times)
US-China Relations

WASHINGTON—The wife of a prisoner of conscience fears that her husband may be killed for his organs by Chinese authorities, she said at a U.S. State Department event on July 17.

“I worry day and night about my husband,” Zhang said during a session at the Ministerial to Advance Religious Freedom hosted by the U.S. State Department in Washington.

“He could be killed for his organs like an unknown number of Falun Gong practitioners have been.”

Both Zhang and her husband are adherents of Falun Gong, a spiritual discipline in the Buddhist tradition comprised of meditative exercises and a set of teachings centered on the principles “truthfulness, compassion, and tolerance.”

Practitioners of Falun Gong have been severely persecuted in China ever since the communist regime banned the practice 20 years ago following the practice’s explosion of popularity in the 1990s.

Zhang, a former professor at Nanjing Normal University who herself has suffered imprisonment and torture as a result of her faith, is among 30 victims of religious persecution presenting at the three-day conference—the largest religious freedom event in the world.

She told President Donald Trump about her husband’s plight during a meeting with survivors of religious persecution at the oval office on July 17.

Zhang also told Trump about another practitioner imprisoned at the same facility who died one day after being released.

Before this practitioner died, he vomited a large amount of blood, she said.

After Zhang’s remarks, the president expressed appreciation for her comments.

Zhang last saw her husband in 2015 just before she left China for the United States, where she has since been living, Zhang told The Epoch Times in a phone interview on July 16.

In 2017, she found out that he had been sentenced to 3 years in prison for sending six letters to the regime’s top leaders, calling them to end the persecution.

This is not the first time Ma, an engineer, has been incarcerated. Over the years, he has been sent to a brainwashing center for six months, detained in a labor camp for 1 ½ years, and imprisoned for 7 years.

Last month, an independent people’s tribunal, after a one-year investigation, confirmed longstanding allegations that the Chinese regime is killing imprisoned Falun Gong practitioners and carving out their organs for transplant.

The tribunal’s final judgment (pdf) said there was clear evidence that forced organ harvesting has taken place in China for years “on a significant scale,” and that it is still taking place.

The tribunal said it was “certain” the organs were sourced from detained Falun Gong practitioners, noting that they were “probably the principal source.”

A range of evidence including “extraordinarily short” wait times for organ transplants in China, vast discrepancies between China’s official organ transplant figures and the number of transplant operations performed, and consistent testimony of Falun Gong practitioners being blood tested while incarcerated, propelled the tribunal to reach its “unavoidable” conclusion.

Zhang recalls Ma telling her that he and other Falun Gong practitioners were blood tested, every three months, while serving his previous prison sentence. No other inmates were tested.

Having been imprisoned and detained in labor camp herself, Zhang was also often blood tested while in prison. At the time, other inmates who were not tested would comment that Falun Gong practitioners were tested because the Chinese Communist Party “cared” about them.

Zhang herself has been sent to a labor camp three times and imprisoned on one occasion, spending a total of 7 ½ years incarcerated for her faith.

While in detention, she endured a range of tortures, including electric shocks, sleep deprivation, forced injections of unknown drugs, and being forced to run for hours under the baking sun.

“For 50 days, I was not allowed to sleep, use the bathroom at will, or take a shower,” she said.

Zhang told The Epoch Times that there were no limits to the methods—both physical and psychological—that the Chinese regime would use to force Falun Gong practitioners to renounce their faith.

“One cannot endure the type of torture they inflict on your body,” she said.

Since arriving in the United States, Zhang has been tirelessly campaigning for her husband’s release. Last year, she wrote to Trump about her husband’s plight, for which she received a letter in response.

In her speech, Zhang called on the U.S. government to impose sanctions under the Global Magnitsky Act on Chinese officials “known to have illegally detained, tortured, and killed Falun Gong practitioners.”

Many perpetrators continue to work in China and have even been promoted for their work in persecuting practitioners, Zhang said.

“I hope that the U.S. government, international media, and human rights groups can help free my husband and the hundreds of thousands of other innocent but jailed Falun Gong practitioners.”