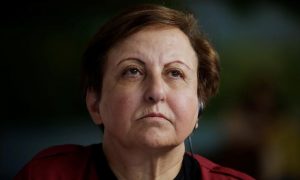 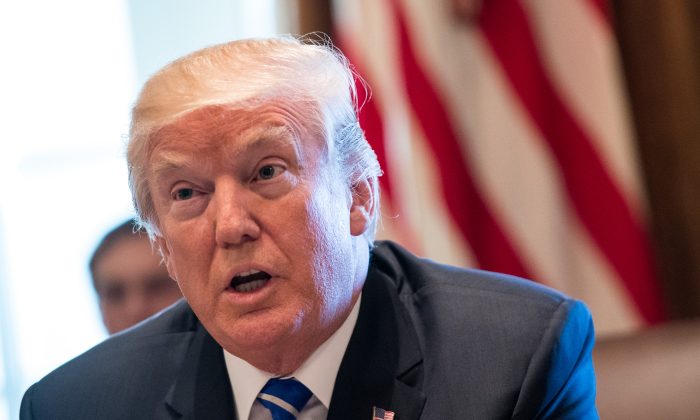 U.S. President Donald Trump speaks to the media during a cabinet meeting at the White House in Washington, D.C., on Nov. 20, 2017. (Kevin Dietsch-Pool/Getty Images)
Politics

President to issue one more waiver on Iran's nuclear program, while simultaneously seeking key changes to improve the deal
By Jasper Fakkert
Print

“The United States will not stand by while the Iranian regime continues to engage in human rights abuses and injustice,” said Treasury Secretary Steven T. Mnuchin in a statement. “We are targeting the Iranian regime, including the head of Iran’s judiciary, for its appalling mistreatment of its citizens, including those imprisoned solely for exercising their right to freedom of peaceful assembly, and for censoring its own people as they stand up in protest against their government.”

A senior administration official briefing reporters on the matter said that the Trump administration is especially concerned with those who are imprisoned solely for using their freedom to assemble or express their political views.

Tens of thousands of Iranians have taken to the streets in recent weeks to call for a change to Iran’s Islamic regime, which has been in power since 1979.

The most prominent person targeted by the sanctions is Sadegh Amoli Larijani, the head of Iran’s judiciary. Larijani has oversight over Iran’s sentencing, including giving death sentences to juveniles and ordering the torture of prisoners. According to the administration official, the torture methods include the use of amputation.

Also targeted under the sanctions is the Rajaee Shahr prison and its director Gholamreza Ziaei. The prison is used to conduct serious human rights abuses, according to the Treasury Department. Among the abuses committed against imprisoned anti-government protesters are the denial of medical care, sexual abuse, unlawful executions, and torture. According to the senior official, in one case, a prisoner had his eye gouged out by prison officials.

The sanctions also target Iran’s Supreme Council of Cyberspace. According to the senior official, the council is used by the Iranian regime to “prohibit or limit freedom of expression.” The council is responsible for restricting access to thousands of websites, including international news organizations, that the regime deems a threat to its rule.

A different senior administration official who briefed reporters on the sanctions said that they “will send a very strong message that the United States won’t allow continued abuses.”

The senior official said that with the targeting of Larijani, whose brother is Ali Larijani, the speaker of Iran’s Parliament, the sanctions “will go to the top of the regime.”

President Trump will extend one more waiver on Iran nuclear sanctions while his administration simultaneously works with European nations who are part of the Iran nuclear agreement, officially called The Joint Comprehensive Plan of Action, to make key improvements to the deal.

Friday is the deadline for the president to certify that Iran is in compliance with the agreement.

“This is the last such waiver he will issue,” one of the senior officials said.

The main two changes sought by the president are the following: an end to the time limitations on the agreement and the inclusion of Iran’s ballistic missile program under the agreement.

Under the agreement as reached between the Obama administration and Iran in 2015, key provisions are set to expire after ten years. Of specific concern is the lifting of the restrictions on uranium enrichment in 2026, which experts believe would put Iran within reach of a nuclear weapon within six months.

A senior administration official said that Trump will push for these restrictions to remain effective for an indefinite amount of time.

Iran’s ballistic missile program was not covered under the 2015 agreement, but instead under a separate UN resolution. This means that the multiple violations Iran has committed in continuing its ballistic missile development have no bearing on the validity of the nuclear deal.

The senior administration official said that Iran continues to spend millions of dollars on its ballistic missile program.

Under the agreement President Barack Obama reached with Iran, the regime in Tehran gained access to more than $100 billion in assets that had been frozen under sanctions. It also received $1.7 billion in cash from the U.S. government.

While many Iranians had hoped that the money would benefit Iran’s economy, most of it is believed to have been used to develop Iran’s military. Over the past year, Iran has accelerated the development of its advanced missile technology and has continued to influence the conflict in Yemen and to arm the terrorist group Hezbollah in Lebanon.