What Has Brought Iranian Protesters Onto the Streets?
0 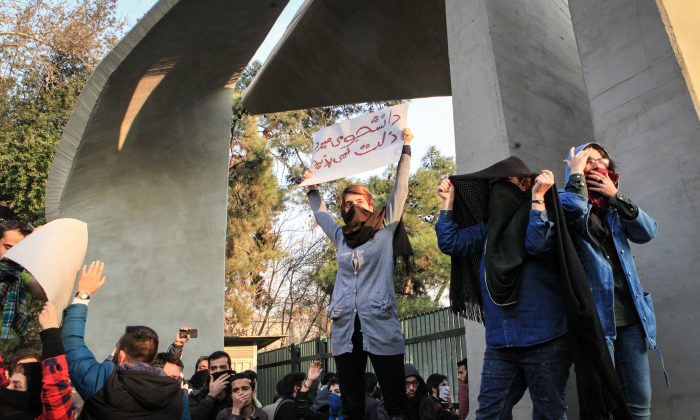 Students protest the Iranian regime at the University of Tehran on Dec. 30, 2017. One of the students is holding a sign in Persian, which translates to, "Students would rather die than accept oppression." (STR/AFP/Getty Images)
Middle East

Iranians Risk Their Lives Calling for End to Regime

Thousands of Iranians have taken to the streets, calling for an end to the Islamic regime that has ruled the country by force for nearly four decades.

What started as protests focused on economic hardships quickly turned into protests against the ruling regime and its supreme leader, Ali Khamenei.

Among the few images and videos that have come out of Iran, some show women who have removed the Islamic hijab that they have been forced to wear since the Islamic Revolution in 1979.

In one such image, a young woman can be seen standing on a pillar in a street in Tehran with her head uncovered, waving her hijab on a stick.

Ever since the Islamic Republic of Iran was formed in 1979, women have been among the most suppressed. They are not allowed to leave the country without their husband’s permission, and in court, their testimony is worth only half that of a man.

In response to the protests, Iranian authorities have blocked the internet in parts of the country, in an attempt to quell the unrest.

The regime has vowed to respond with an “iron fist.”

According to official numbers, 21 people have been killed and 450 arrested. Given the tight control of information by the authorities, the real numbers are believed to be much higher.

White House press secretary Sarah Sanders said on Jan. 2: “The Iranian regime spends its people’s wealth on spreading militancy and terror abroad, rather than ensuring prosperity at home. Prices for everyday staples and fuel are rising, while the revolutionary guards spend the nation’s wealth on foreign militant groups and enrich themselves in the process.”

“America longs for the day when Iranians will take their rightful place alongside the free people of the world,” she said.

According to official numbers, 21 people have been killed and 450 arrested.

Following the Green Movement uprisings in 2009, which came in response to the contested reelection of hardliner President Mahmoud Ahmadinejad, numerous rights abuses have been revealed. Protesters were killed, and some of those imprisoned were tortured and raped, according to Human Rights Watch.

Unlike the pro-reform demonstrations of 2009, the latest protests appear more spontaneous and don’t seem to be orchestrated by leaders who can be identified and rounded up by the authorities.

This could be more dangerous for the authorities, who have regarded the less well-off as loyal to the Islamic regime, as opposed to the more middle-class protesters who took to the streets nine years ago.

According to official figures, 90 percent of those arrested in the current wave of protests are under 25 years old. Many young people are much more interested in jobs and change than in the Islamist ideology and anti-West sentiment that the old guard clings to.

Some demonstrators have shouted “Reza Shah, bless your soul”—a reference to Iran’s ruler from 1925 to 1941, and his Pahlavi dynasty, which was overthrown by Ayatollah Ruhollah Khomeini, the Islamic regime’s first leader.

Since the start of the protests in Iran on Dec. 29, President Donald Trump and senior officials have shown unequivocal support for the protesters.

The current uprising was predicted by Trump in September, when he, speaking before the 72nd U.N. General Assembly, said that “the entire world understands that the good people of Iran want change.”

“The day will come when the people will face a choice: Will they continue down the path of poverty, bloodshed, and terror, or will the Iranian people return to the nation’s proud roots as a center of civilization, culture, and wealth, where their people can be happy and prosperous once again?” Trump said in his remarks.

Prior to the 1979 Islamic revolution, Iran had a vibrant culture that had opened itself to the West. While political freedom was limited, people enjoyed religious freedom, and the country had good relations with the United States and Israel.

Following the Islamic Revolution, strict Islamic laws were implemented. Under Islamic law, women are seen as less than men in most matters, and violence against them is not just tolerated but encouraged for certain offenses.

Since coming to office last year, Trump has taken a number of measures to oppose the Iranian regime and Islamic extremism more broadly. He chose not to recertify the Iran nuclear deal to Congress, but rather renegotiate parts of the deal. He has encouraged Arab leaders to stand up to Islamic extremism, prompting Saudi Arabia to spearhead the effort in the region. He acknowledged Jerusalem as the capital of Israel and decided to move the U.S. embassy there, something that had been required under U.S. law since 1995.

Trump has also warned the Iranian regime against committing human rights abuses against protesters. “The USA is watching very closely for human rights violations!” he wrote in a tweet on Dec. 31.

“Such respect for the people of Iran as they try to take back their corrupt government. You will see great support from the United States at the appropriate time!” Trump wrote in a tweet on Jan. 3.

Vice President Mike Pence said that the United States would not repeat the mistake it made in 2009 by not supporting the thousands of protesters who took to the streets.

“America will not repeat the shameful mistake of our past when others stood by and ignored the heroic resistance of the Iranian people as they fought against their brutal regime,” Pence wrote in a tweet on Jan. 1.

“We must not and we will not let them down,” Pence said.

As long as @RealDonaldTrump is POTUS and I am VP, the United States of America will not repeat the shameful mistake of our past when others stood by and ignored the heroic resistance of the Iranian people as they fought against their brutal regime… (1/2)

(2/2)…The bold and growing resistance of the Iranian people today gives hope and faith to all who struggle for freedom and against tyranny. We must not and we will not let them down. #IranProtests

As a lawmaker in the House in 2009, Pence co-sponsored a resolution that expressed “support for all Iranian citizens who embrace the values of freedom, human rights, civil liberties, and rule of law.”

The resolution also condemned the violence committed by Iranian authorities and pro-government militias against the protesters.

Michael Mullen, who served as Obama’s chairman of the Joint Chiefs of Staff from 2009 to 2011, said in an interview with ABC News on Dec. 31 that the Obama administration “chose to not be as supportive as we could have been” in 2009.

“I hope we can be right now so that Iran can continue to evolve. … I think support of them and their people is absolutely the right thing to do.” Mullen said.

In April 2009, the Obama administration had begun laying the groundwork for negotiations with Iran that would eventually result in the controversial Iran nuclear deal, officially called the Joint Comprehensive Plan of Action, in 2015.

Under the agreement, the Iranian regime gained access to more than $100 billion in assets that had been frozen under sanctions. It also received $1.7 billion in cash from the U.S. government.

While many Iranians had hoped that the money would benefit Iran’s economy, most of it is believed to have been used to develop Iran’s military. Over the past year, Iran has accelerated the development of its advanced missile technology, and has continued to influence the conflict in Yemen and to arm the terrorist group Hezbollah in Lebanon.

Trump announced in October that his administration will renegotiate key parts of the agreement, so that Iran’s missile development program becomes part of the deal, as well as negotiate an end to the time limits on key provisions in the deal.

Experts have pointed out that under the current deal, Iran is allowed to install thousands of advanced centrifuges in 2026, putting the regime within reach of a nuclear weapon within six months at that point.